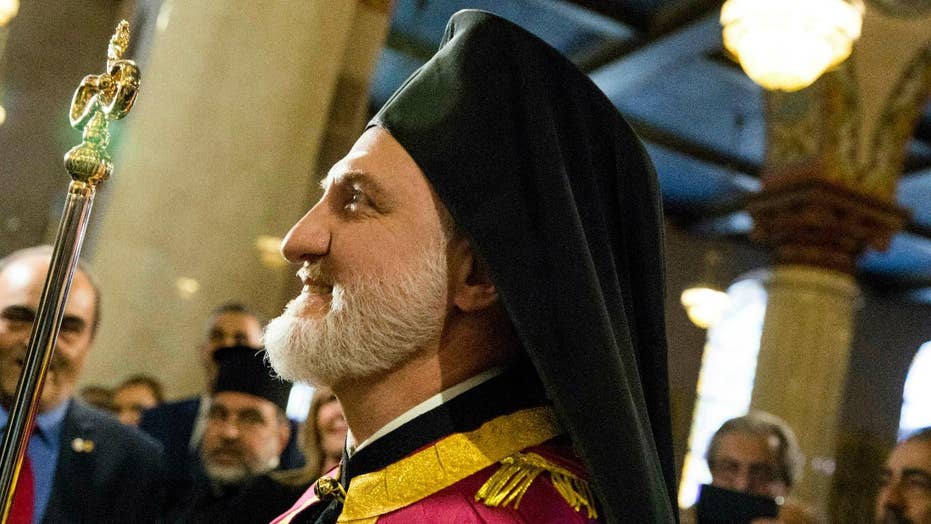 US Greek Orthodox Church gets first new leader in 20 years

Archbishop Elpidophoros Lambriniadis was enthroned at an elaborate ceremony at the Cathedral of the Holy Trinity in NYC.

Amid the sounds of ancient chant music of Byzantium, a new archbishop was enthroned Saturday at the Greek Orthodox Church in America.

The packed pews of Holy Trinity Cathedral in New York City erupted in shouts of "Axios!" (Worthy! in Greek) as His Eminence Archbishop Elpidophoros Lambriniadis, 51, entered the center aisle. Elpidophoros, a native of Istanbul, is the shepherd now for 1.5 million Greek Orthodox Christians residing in the United States.

That number is small in comparison to the ranks of the Roman Catholics and Protestants that dominate the country's Christian landscape. But the lavish service harkened back to the heart of Christianity, some 2,000 years ago, when all Christians were part of one church, one people, and one Shepherd, Jesus Christ.

The new archbishop also signals a welcome change to a contentious issue: the completion of St. Nicholas Church, the only house of worship destroyed on 9-11.

Elpidophoros replaces Archbishop Demetrios, 91, who resigned a few months ago after serving for nearly 20 years. Much of his leadership was clouded with controversy over the rebuilding of St. Nicholas National Shrine Church, which sits next to the World Trade Center. The plans for its rebuilding were impressive: the iconic Greek Orthodox dome and beautiful garden were to be a place to welcome all 9-11 memorial visitors needing a spiritual respite from the horrors of reliving the tragedy and trauma of the terrorist attacks.

The church structure is now more a shell than shelter; the building unfinished. Construction was halted in December of 2017 after donors complained about how the finances were managed. Some monies allocated for the shrine were reportedly moved to pay for other projects. According to reports, the project needs another $30 million to be completed, which brings the total amount of the project to $80 million. Elpidophoros said in his enthronement speech that he would convene a fundraising committee.

He vowed: “My heart is ready and steadfast in this task as well.”

Elpidophoros' other task is to spiritually strengthen a weakened Greek Orthodox Church, once considered an immigrant church, but now one whose young members are not as zealous about learning the Greek language – which is often the main language of the services. Elpidophoros oversees 540 parishes in the U.S. and some 800 priests.

Father Aristidis Garinis, a young priest who is one of three for the large congregation of St. Nicholas Greek Orthodox Shrine Church in Flushing Queens, attended the enthronement.

While he admires Demetrios as a great spiritual leader, he said of Archbishop Elpidophoros, "we are all eager to follow him side by side as he continues to build up the body of Christ here in America. His vast knowledge and spiritual maturity has immediately infused us priests with a stronger will to work and produce in the vineyard of our Lord."

Eplidophoros is only the seventh Archbishop to be enthroned in the history of Greek Orthodox church America. At 51, he's young enough to lead the church for the next few decades. But its relatively small numbers belies its political prowess.

The Archons, comprised mostly of prominent and, some would say wealthy, Greek Orthodox men, whose fundamental goal and mission, says its website, "is to promote the religious freedom, wellbeing and advancement of the Ecumenical Patriarchate, which is headquartered in Istanbul, Turkey."

Although it has close ties to the Trump administration, it is not an arm of the Republican Party. While Alex M Azar II, the secretary of Health and Human Services, gave the welcome address at the enthronement, a few weeks back, former Vice President Joe Biden dropped in at an Archon event honoring prominent priest, Father Alex Karloutsos.

Greek politicians, too, have left their mark on America. There is former presidential candidate and former governor of Massachusetts Michael Dukakis, former Vice President Spiro Agnew and, of course, Democratic advisor George Stephanopoulos, who is also an ABC News Anchor and host. There are also six Greek Americans serving in the House of Representatives, including Gus Bilirakis of Florida, a Republican, and Chris Pappas of New Hampshire, a Democrat.

Elpidophoros knows he has his hands full. While he was elected unanimously, the one-time theology professor feels the outside world is watching and asked for the church hierarchy's "cooperation in the days and months ahead."