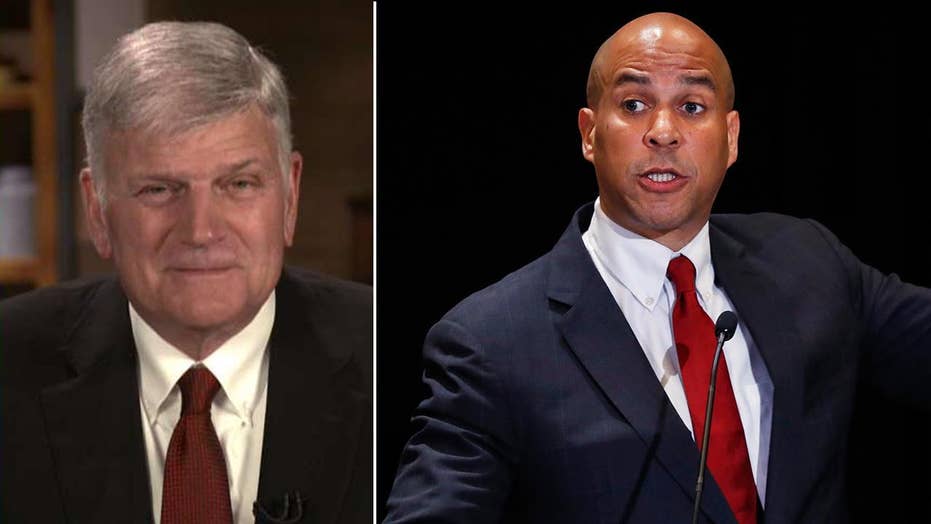 The Rev. Franklin Graham took Democratic presidential candidate Sen. Cory Booker, D-N.J., to task for saying that "thoughts and prayers" are useless in the wake of national tragedies involving guns.

"More people in my lifetime have died in this nation due to gun violence and then all of the wars and revolution wars now. We are not going to give thoughts and prayers, which to me is just bullsh*t," Booker told CNN over the weekend.

The evangelical leader from North Carolina points to London, where the mayor banned guns and the murder rate increased with people using knives.

"It's the human heart," Graham said. "The world has a sin problem and only God can fix that. You can have all the laws you want. You can take all the guns and put them in Central Park and have a mountain of guns. The human heart has to change. And not one gun is going to walk outside the park and shoot somebody. It takes a human being to pick up that gun and have the purpose in their heart to use that gun for the wrong purposes."

He concluded: "I just believe that we need to turn our hearts to God and let him transform our hearts and change our hearts."

Graham's comments come as Vice President Mike Pence, who has received significant backlash for his outspoken faith, told Liberty University graduates over the weekend they will be "ridiculed" for their beliefs.

Graham celebrated Pence's speech and said he agrees with him.