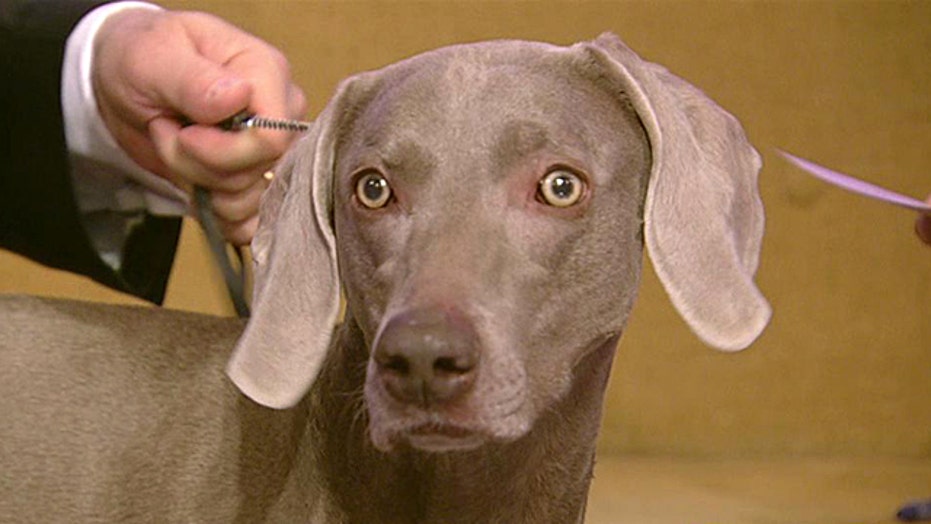 'Fox & Friends' is going to the dogs

The 8-year-old Chow Chow had been knocked out in the first round of the Westminster Kennel Club Dog Show.

Her owner, Linda Albert, sat quietly beside her, eating a sandwich and looking equally exhausted.

Albert had high hopes for Westminster, having won here in the past. But after today’s loss, she and partner Victor Fernandez aren’t sure they’ll be back.

“I don’t like the venue,” Fernandez said of the space at Pier 92. “It doesn’t have the same atmosphere.”

Pier 92 serves as the precursor to Madison Square Garden, where the best of breeds compete in groups and ultimately vie for Best in Show on Tuesday.

There were early indications that today wouldn’t be Albert’s day. The pet psychic she consulted before the show told her Brooke wouldn’t like the judge’s hands. Brooke, who underwent chemotherapy last year after being diagnosed with thyroid cancer, was back in the ring for the first time in five years.

Brooke is one of 15 Chow Chows Albert keeps at her kennel on New York’s Long Island. Albert has gained plenty of attention for her well-bred pooches. Albert gave Martha Stewart her beloved dog Paw Paw, and a pair of Albert’s puppies appeared on the Animal Planet show, “Too Cute.” Albert’s other Westminster contender,  2010 Best in Breed champion Quixote, fared slightly better than Brooke, but still didn’t make it back to Madison Square Garden.

Mother-daughter duo Mary and Michelle Ridenour of Novi, Mich., advanced to the second round at the Garden with their Ibizan Hound, but that was the end of the line for them

Mary, an experienced breeder and lover of both Ibizan Hounds and Pomeranians, is no stranger to the Westminster Kennel Club Dog Show.

Mary recalled her most embarrassing Garden experience,  in which she was showing a Tibetan Spaniel. The dog, a small and furry member of the non-sporting group, ran up her skirt as she showed him in the ring.

Mary says it almost appeared as though she was giving birth to the dog.

Ibizan Hound Kam was much better behaved than that rascally canine. Mary and Michelle fed him hot dogs as they waited for the show to begin.

“All bets are off at Westminster,” said Mary.

But the savory sausage wasn’t the good luck charm Kam needed, and he lost the Hound group to the American Foxhound.

Though neither Kam nor Brooke took home a coveted blue ribbon, they served their devoted owners proud.

Dogs must first win Best in Breed before they can advance to Best in Group, the seven groups being Hound, Toy, Non-Sporting, Herding, Sporting, Working and Terrier. Then, the winner from each group competes in the final round: Best in Show.