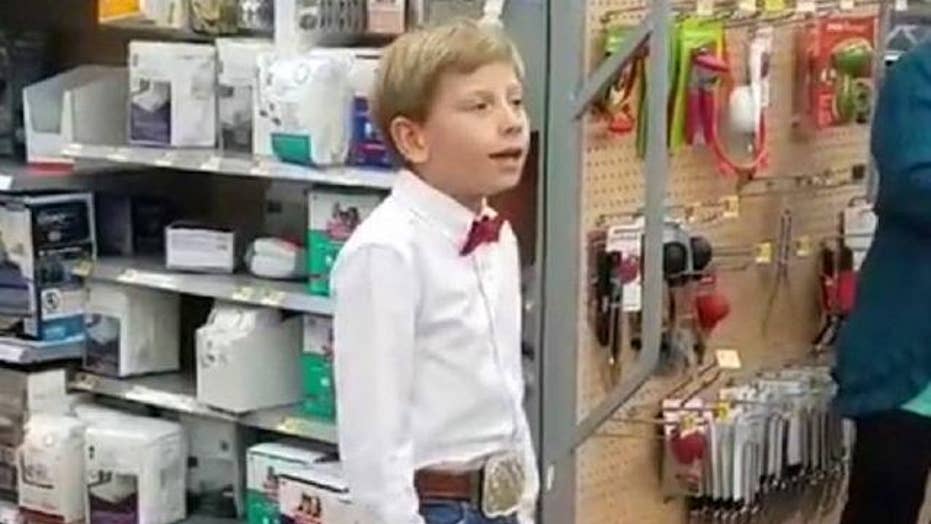 An 11-year-old boy stunned Walmart shoppers with an impromptu performance in front of the checkout lines at a store in Harrisburg, Illinois last week. Wearing a cowboy belt buckle, studded boots and a red bowtie, the young boy demanded attention as he yodeled his version of Hank Williams' "Lovesick Blues."

The video was first uploaded by ViralHog, garnering 1.1 million views on YouTube since it was uploaded on March 26. The next day, the video made its way onto Twitter with the cheeky caption, "Me: which aisle can i find light bulbs? Walmart employee."

More than 55,000 people shared the hilarious meme -- and the "yodeling kid," later identified as Mason Ramsey, became a viral sensation.

"Is that Woody?" one Twitter user asked, referring to the cowboy doll Tom Hanks played in "Toy Story."

"Anyone else couldn't stop looking at the foot tap?" another added.

"This is just gold! I have been trying to sound like him since I heard this. Gold," a woman commented.

This isn't the first time Ramsey has gone viral for his music, as a Twitter user soon pointed out.

A video of the boy sitting in a Walmart shopping cart, singing Hank Williams' “Hey Good Lookin’” went viral in January 2017, according to Tennessee radio station Beaver 100.3 FM, which later reached out to the boy for an encore performance.

"So we got a hold of Mason’s Grandparents and they were nice enough to bring him to Clarksville so that we could have him perform for us AND he was even cool enough to help us recreate his viral video in the Wilma Rudolph Walmart!" the Clarksville station explained in a post online.

"We are hoping that Mason has a long and successful career!" the station added.

Ramsey joined Twitter in April, per his fans' request. As of Friday morning, his follower count has grown to more than 163,000.

"I am Mason Ramsey, also known as the 'Walmart boy,'" he announced in a video on his page, which he says is monitored by his "guardians" on April 3. "You can follow me on Twitter ... or Instagram. Thank you, everyone."

It looks like we'll be seeing more of Ramsey. Walmart announced in a tweet on Tuesday that the 11-year-old is going to get his very own concert.

"[He] yodeled his way into our hearts & aisles, so we’re putting on a concert at his local Walmart to let him shine!" the company said.