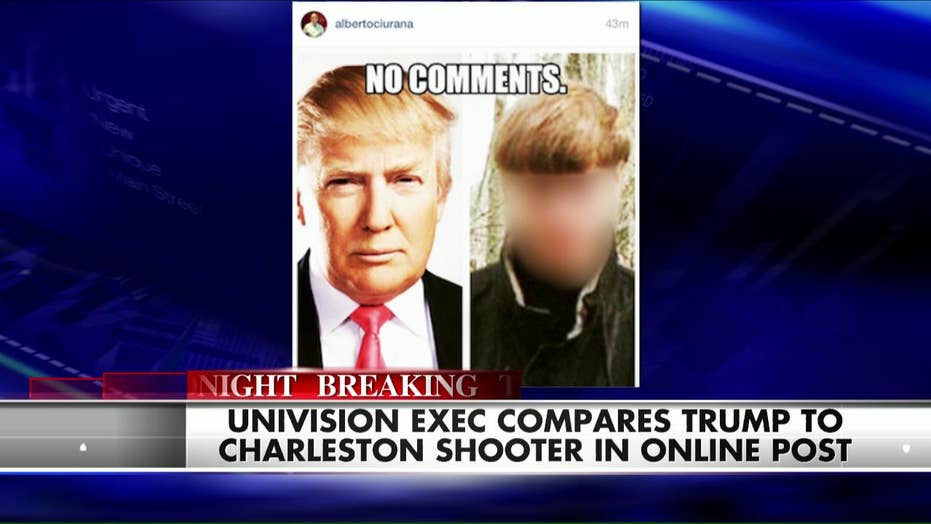 Republican president hopeful Donald Trump, who said Thursday he would sue Univision for breach of contract, now plans to go after the network for defamation after an executive compared the mogul to the man accused of murdering nine black people in Charleston, South Carolina.

Trump, who on Friday called for a boycott of Univision, said he would still participate in a presidential debate hosted by the Spanish-language network.

Anyone who wants strong borders and good trade deals for the US should boycott @Univision.

Trump said Thursday on Fox News' The Kelly File that he plans to sue Univision for defamation after the Spanish language media giant's president of Programming and Content sent out a photo on Instagram photo comparing the presidential candidate to 21-year-old alleged Charleston shooter, Dylann Roof.

“Well, I think it’s disgraceful," Trump said." I think he should be ashamed of himself.  He immediately deleted it and the lawyers are going to have a field day."

“They put a picture of me up next to that horrible human being who killed nine people," Trump said in an interview with The Daily Caller. “You know what that picture’s going to cost them? It’s going to cost them a fortune.” Trump went on to tell the Daily Caller that the Instagram post will "play very prominently" in his lawsuit against Univision.

The outspoken billionaire mogul also told Fox News' Megyn Kelly Thursday that despite his plans to sue Univision, he would still take part in the TV company's Republican presidential candidates' forum scheduled to take place before the March primaries in 2016.

"I guess, I would probably go because I would just have to go and defend myself," Trump said. "They may be much tougher on me than anybody else."

Trump said on The Real Story with Gretchen Carlson Thursday that he plans to sue media giant Univision for "hundreds of millions of dollars" for severing ties with him and the Miss Universe pageant organization. Univision had said earlier Thursday that because of offensive comments Trump made about Mexico and Mexicans when he launched his campaign, it was breaking off with the pageant organization – of which Trump is an owner – and that it would not air the event on July 12. Trump said Univision was breaching its contract to air the pageant for five years, an agreement worth $13.5 million.

On Friday Trump said in a statement that “Ciurana issued an apology to me late last night. Apology not accepted. I call for his resignation as president of Univision, and Univision should not be allowed to host the Presidential debate. It is a total conflict of interest.”

The billionaire also said on The Kelly File Thursday that he believed Univision severed ties with him because of pressure from Mexico's leaders.

"A tremendous amount of pressure was put on Univision – by Mexico and the leaders of Mexico – because they didn’t like about what I was saying about trade," Trump said. "All I have to do is be silent and Mexico would continue to rip us off for many years to come, but that’s not what our country needs to be great again."

He went on to laud how his frankness and willingness to speak straightforwardly about issues such as immigration is what makes him a better candidate than Republican presidential candidate frontrunner, former Governor Jeb Bush.

"Jeb Bush does not speak this way, that I could tell you," he said. "If Jeb Bush, was in my position he would have folded, which I could have done very easily."