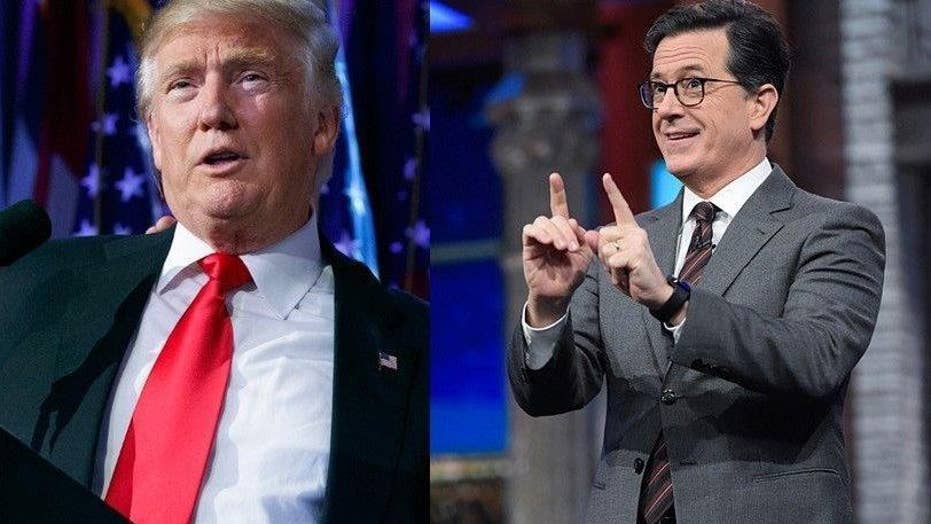 Stephen Colbert under fire over lewd joke about Trump

Did late-night host cross the line?

During President Donald Trump’s appearance on “Face The Nation” on Sunday, Trump told host John Dickerson he considers the show to be “fake media” and that he refers to it as “Deface The Nation.” That did not sit well with “The Late Show” host Stephen Colbert who jumped to Dickerson’s defense during his monologue on Monday.

“Donald Trump, John Dickerson is a fair-minded journalist and one of the most competent people who will ever walk into your office, and you treat him like that?” Colbert fumed. “John Dickerson has way too much dignity to trade insult with the President of the United States to his face, but I sir, am no John Dickerson.”

He said as a member of the CBS family it was his duty to stand up for Dickerson.

“When you insult one member of the CBS family, you insult us all! Bazinga!” Colbert said, using a well-known “Big Bang Theory” catchphrase.

He continued, “Mr. President, I love your presidency, I call it ‘Disgrace The Nation.’ You’re not the POTUS, you’re the ‘gloat-us.’ You’re the glutton with the button. You’re a regular ‘Gorge Washington.’ You’re the ‘presi-dunce’ but you’re turning into a real ‘prick-tator.’”

Colbert also quipped, “The only thing smaller than your hands is your tax returns, and you can take that any way you want.”

Tonight: Stephen tells the President everything journalists, restrained by their dignity, wish they could say. #LSSC pic.twitter.com/FHG4jvF8fv