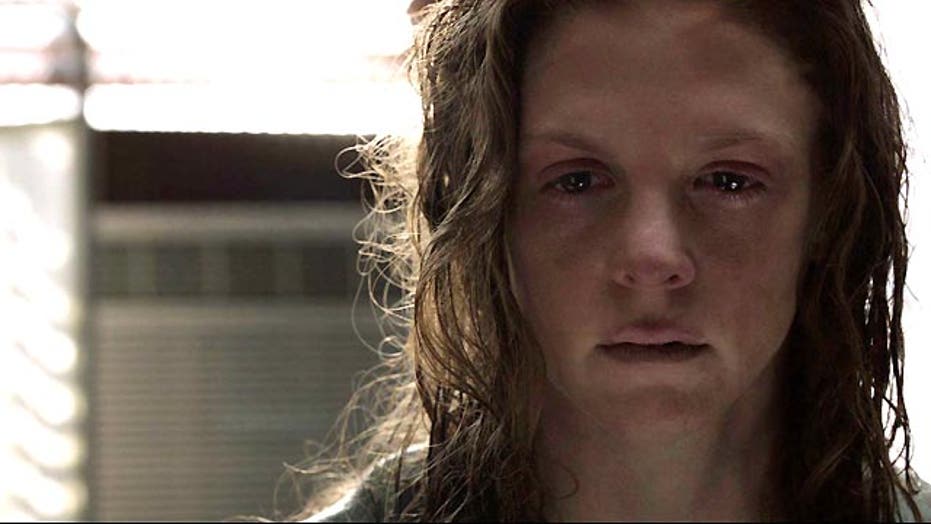 Ashley Bell back to scaring audiences

Ashley Bell may be best known for her horror movie work, but the actress says she’s pretty easily frightened. The “The Last Exorcism Part II” star told FOX 411 while she is no stranger to scary flicks; she has plenty of other, less creepy projects that keep her busy.

FOX 411: What were you most looking forward to when it comes to returning to a role?
BELL: In rebuilding the character, she’s cracked from the first one, she doesn’t remember anything of what happened to her and in building the character it was almost like putting the pieces together…and there’s some missing… and that’s where the devil comes in and it gets scary.

FOX 411: Are you scared of films like this, are you a horror movie fan?
BELL: Yes, my summers were spent watching horror movies with my dad so it’s led to an incredibly overactive imagination. I’m scared of the dark. I scare myself.

FOX411: When we talk about challenges… the physical challenges, this is all you?
BELL: This is all me. There was no CGI for the first film, it was all me. So for part two it was really important to do all my own physicality, to kind of be true to the character and just true to what we were going for with the first one. So for part II I do this big levitating back bend, and I have the stress fracture to prove it. The stunt guy signed me off about eight takes and we did about twenty. But each take it kept on getting more and more exciting and more kept on being built onto it and then at the end I… hobbled on out.”

FOX 411: You’re mixing up various roles, let’s talk about “The Marine 3 Homefront.”
BELL: The Marine is out on DVD, you can find it everywhere, and this is a straight action movie. It’s jam-packed, it’s fun, it’s entertaining, Mike Mizanin from the WWE, WWE Superstar, he stars in it, he plays my big brother.  I loved being on the set. My childhood was running around with Nerf guns in my tree house so this was a lot of fun. We’re filming on an abandoned cruise ship, Mike is jumping out of windows, cars are exploding, they’re shooting off 10,000 rounds of live ammo a day. It was great.

FOX 411: Action, Horror… your mother was a co-founder of [Los Angeles comedy club] The Groundlings, so comedy is that in your background as well?
BELL: I love doing comedy. I go back to The Groundlings in between work all the time just to do improv, just to stay loose and have fun and meet friends. So I really hope to jump back into comedy.

FOX 411: Let’s talk about video games, how did that come about, and what is it like to hear yourself in a video game?
BELL: My dad does tons of voiceovers, he was Duke in G.I. Joe and Transformers and Handy, Lazy, and Grouchy Smurf so I grew up with the best bed time stories ever. They were these epic sagas. Watching him work, I wanted to try it. Doing voiceovers is so great because even though many people would think it’s just your voice, you really do use all your physicality. I’ve done everything from playing a butterfly to Alice in Wonderland when she’s 10 feet tall, so it allows you to be an actor and build new characters.

FOX 411: The animated series, tell me about “The LeBrons.”
BELL: My dad is actually directing “The LeBrons,” which is based on LeBron James’ life and kind of different facets of him, and I got a chance to be on the show.  I had to audition about five times for it, they put me through the ringer, so just because it was my dad kind of doesn’t mean anything. You gotta bring it. It was such a life moment to be able to be working with my dad, looking at him across the studio, and it’s a fun show.

FOX 411: Were you a fan? Sports fan?
BELL: I’m a huge LeBron James fan. I love The Heat. He’s an incredible basketball player.

FOX 411: Now let’s talk about a passion project of yours, this documentary “Love and Bananas,” how did that come about?
BELL: I spent all of January in Cambodia filming “Love and Bananas,” which is a documentary on the plight of Asian elephants.  A very close family friend runs the Cambodian Wildlife Sanctuary. I teamed up with, I’ve been working with Elephant Nature Park and Save Elephant Foundation who rescue the elephants.  I got a chance to hug elephants and kiss them.  These elephants have been abused and they don’t trust humans. And to see them now, not chained, in their natural habitat, kind of regaining the trust of humans, it was really an incredible experience.

FOX 411: So what’s coming up next?
BELL: I’m hoping to go back later in the year to Cambodia to finish filming the documentary, and I’m going to be at South by Southwest promoting “The Bounceback” and everything else that follows.