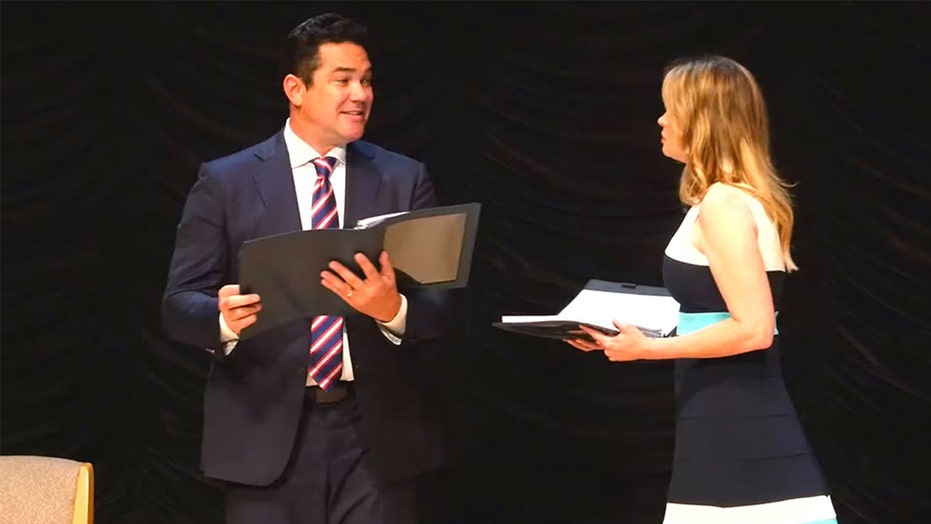 The entire play, "FBI Lovebirds: UnderCovers," is derived, verbatim, from the text messages between Strzok and Page, as well as the pair’s answers to prolonged questioning in private congressional hearings.

It is the first time CPAC will have a play staged in its nearly 50 years as one of the largest annual conservative conferences. Labeled by Politico as “Hamilton for the MAGA crowd,” the FBI Lovebirds project was crowdfunded on Indiegogo and accessible at FBILovebirds.com.

The play is set to be featured on the CPAC main stage in National Harbor, Md., at 5 p.m. on the third day of the conference.

“FBI Lovebirds: UnderCovers inspired President Trump in his Minnesota speech when he mocked Strzok and Page,” a press release explained, adding that the speech came one day after Trump tweeted a trailer for the play and was widely condemned by Democrats.

The play debuted at the amphitheater at the Ronald Reagan Building and International Trade Center in Washington, D.C., on June 13. The performance was first scheduled to take place at another venue, but the theater backed out of the project two weeks before it was scheduled to take place, citing “violent threats.”

"In his texts and congressional testimony, you learn a lot about Peter Strzok and what he finds important," Cain said.

“Acting in films and television for the last 40 years has been a great joy. I have wholeheartedly enjoyed the process of doing a play. Performing in front of a live audience has been an exciting new experience and challenge for me. Lisa Page was a bad actor in her role at the FBI. It is not easy having to play a bad actor,” Swanson said.

"This is the play that the D.C. establishment [doesn’t] want you to see because it reveals the truth,” the play’s conservative filmmaker Phelim McAleer told Fox News in September.

“Don’t forget this is completely verbatim -- using only the texts and congressional testimony of Strzok and Page. Though [through] these private communications we see that they said the ‘Russia collusion’ investigation was started as an ‘Insurance policy’ in case Trump gets elected," McAleer said.

He added: "I felt people need to see this and they need to know the truth -- that’s why the D.C. establishment tried to shut it down."

McAleer is also behind the movie "Gosnell," the story of abortion doctor Kermit Gosnell, described by ABC News as “America’s Biggest Serial Killer.”