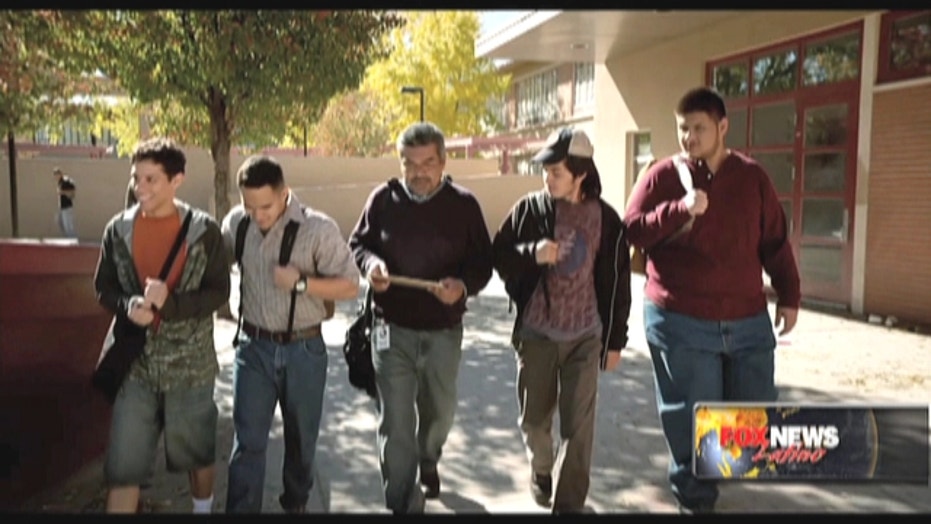 “Spare Parts” takes to the big screen an inspiring yet bittersweet story of a group of high school students, all undocumented, who rise to the national spotlight with just their ingenuity and $800 in their pocket.

It’s a real story, and it happened 11 years ago in Arizona.

In 2004, four Mexican-American teenagers from Phoenix’s Carl Hayden High School built an underwater robot that won a NASA-sponsored national robotics competition, beating out engineering teams from prestigious schools across the country, including MIT.

The story captured George Lopez’s heart and attention after it was published in Wired magazine the next year, and not long afterward a movie was in the works.

Lopez plays Fredi Cameron, a character that blends the two teachers that coached the award-winning team.

“I think it’s hitting it out of the park when you, you know, start your career writing jokes on gas bills and whatever you can get your hands on, and you end up doing a very dramatic scene with an Academy Award-winning actress,” said Lopez, referring to actress Marisa Tomei.

The comedian, who shot to stardom with ABC’s “The George Lopez Show” (2002-2007), said he’s now shifting his focus and committed to taking on more dramatic roles like this one.

Jaime Lee Curtis is also in the film, playing the principal, as well as Mexican superstar Norteño singer Gerardo Ortiz, who portrays a student pushing to change the school’s anthem into a Spanish "corrido" (Mexican ballad.)

“This is a movie about hope, it's about possibility; it’s about a broken system that stops that possibility and hope from growing, from dreams being dreamt and fulfilled,” said Curtis.

Actor Carlos PenaVega, who starred in the Nickelodeon hit show “Big Time Rush,” plays one of the undocumented students from became a symbol for hope and never giving up.

”I had to work my butt off," PenaVega said about landing the role in the uplifting drama. “Transitioning into film and stuff is a whole other ball game," he added.

He also said he hopes the movie inspires kids. However, this story has no happy Hollywood ending.

Some of the students "Spare Parts" is based on attended the movie’s Hollywood premiere, last Thursday — and one decade after their glorious moment, they are still struggling. They had a fleeting taste of the American Dream but their legal status has hindered their opportunities for obtaining higher education and well-paying jobs.

Cristian Arcega received a scholarship to Arizona State University, but it was later revoked because of Proposition 300. Other members of the winning team are trying to get by as line cooks and even day laborers.

Although the students used creativity, intelligence and drive to create their award winning robot that beat out the best and brightest engineering teams in the country, it wasn’t enough for them to achieve their most coveted prize: citizenship.

Lee Curtis told Fox News Latino that she hopes the film brings attention to the millions of undocumented people like them who are seeking a path to citizenship.

"The president of the United States understands we have to make changes in our immigration policy. We have a new Congress this year (...) we have an opportunity to bring this to debate," the actress said.

"It’s our job to bring it to our representatives and say this is important to us, make change," she added.