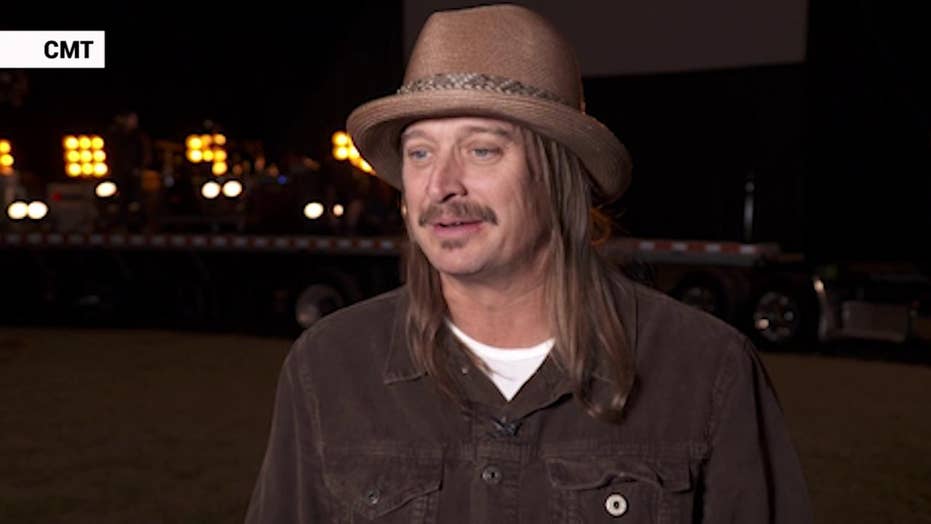 Kid Rock: It was 'wrong' for Al Franken to resign

Kid Rock tells CMT why he thinks Al Franken should not have resigned from Senate.

Gamblers will likely be watching, too.

That’s because a European sports book called Bookmaker.eu has been taking bets on whether Rock will mention President Donald Trump during his set between the game’s second and third periods, the Tampa Bay Times reported.

As of Friday, most wagerers were guessing that Rock would not mention the president, the newspaper reported.

But history shows that Rock – who has supported Trump and even visited him at the White House -- hasn’t been shy about expressing his political views.

Most recently, Rock told “CMT Hot 20 Countdown” that he doesn’t think Democrat Al Franken should have resigned from the U.S. Senate – even though he doesn’t share Franken’s political views.

The singer said he thought people overreacted to the photo in which Franken was shown pretending to grope a sleeping Leeann Tweeden during a USO tour in Franken’s pre-Senate days.

Earlier this month, Rock donated about $122,000 to CRNC Action, an affiliate of the College Republican National Committee that did voter registration work at his concerts last year.

Rock had raised the money through merchandise touting his parody U.S. Senate campaign.

“Man, it scared the crap out of the Democrats,” Rock told CMT.

Some speculated that Rock might even run for a Senate seat against Eminem, his fellow Michigander and recording artist.

In an interview last week in Billboard magazine, Eminem continued to speak against the president.

“A (expletive) turd would have been better as a president,” he told the magazine.

In the same interview, Eminem said he wouldn’t care if his views alienated the people who buy his music and concert tickets.

“At the end of the day, if I did lose half my fan base, then so be it,” he said, “because I feel like I stood up for what was right and I’m on the right side of this.”

If he’s willing to bet on that, perhaps a wagering site in Europe would want to hear from him.

Fox News' Sasha Savitsky and the Associated Press contributed to this story.