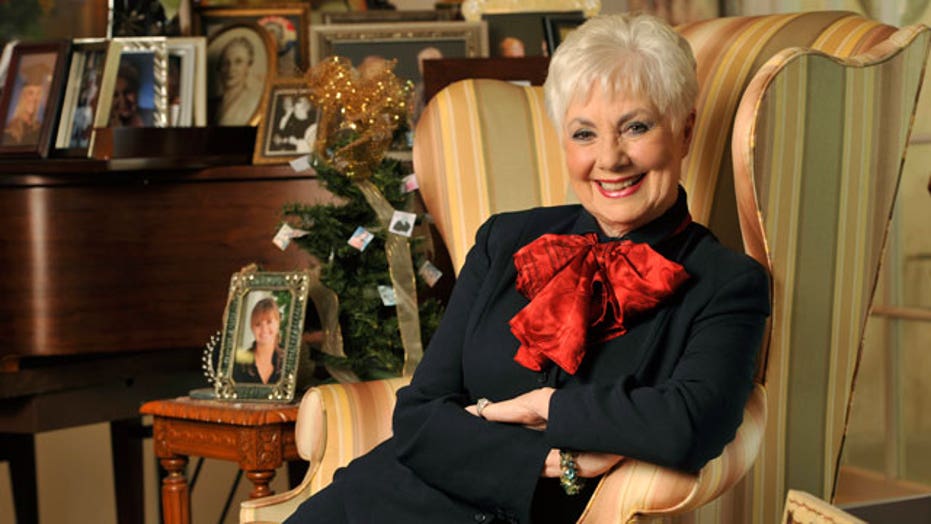 Shirley Jones opens the door to her house and appears every inch the ladylike Marian the librarian or sweet farm girl Laurey or cheerfully steady Mrs. Partridge, offering a warm smile and handshake.

Her elegant, modestly high-necked jacket is black, her makeup is discreet and her silver hair tidy. Jones' living room has the sort of traditional furniture and knickknacks (exception: a prominent Academy Award) that would fit any suburban house.

It all adds up to the publicly familiar Shirley Jones, whose crystalline soprano voice and dewy prettiness made her an immediate star in the 1950s film versions of "Oklahoma!" and "Carousel" and who captured a subsequent generation of fans in TV's "The Partridge Family" in the 1970s.

Then there's "Shirley Jones," her new autobiography (written with Wendy Leigh and published by Simon & Schuster's Gallery Books imprint) that turns the 79-year-old actress' image on its head in startling — even shocking — ways.

"So bring out the smelling salts, hang on to your hats, and get ready for the surprise of your lives!" she writes, coyly, in the book's introduction. It's not false advertising.

There's a recounting of her early life and dazzling career that included working with two musical theater masters, Richard Rodgers and Oscar Hammerstein, as well as many of Hollywood's top actors, including Marlon Brando (king of the retakes to exhaustion, Jones said), Jimmy Stewart (charmingly ditsy) and Richard Widmark (the only co-star she fell in love with).

But a substantial part of the book is spent on her troubled marriage to the late Jack Cassidy, the glossily handsome actor and singer whom she describes in a passage as her first lover and "sexual Svengali," and whose lessons she shares candidly.

The character of Marian, the spinsterish librarian in 1962's "The Music Man," another smash hit for Jones, "wasn't me," she said firmly. And her autobiography makes that abundantly clear, although she says it took the passing of years for to bring such candor.

"I never would have written this book if I weren't the age I am now," she said.

She overturned her squeaky-clean image once before with her Oscar-winning portrayal of a vengeful prostitute in "Elmer Gantry" (1960) opposite Burt Lancaster, and the role that she considers her most important. It also brought backlash from her admirers.

"I got letters up the kazoo: 'Why would you ever take a part like this?" Jones recalls.

Marty Ingels, the comedian who is her second husband of 35 years and counting, jokes that he is offended by her personal history.

"All that stuff she did with her husband (Cassidy), all those adventures .... I'm looking into the grounds of having my marriage annulled," he said.

That draws a boisterous guffaw from Jones, whose loyalty to her outspoken, eccentric spouse has provoked speculation about how she could have jumped to Ingels from Cassidy, deeply troubled but unquestionably urbane.

Ingels lives up to his image by joining the conversation attired in a purple bathrobe and an oversized top hat with "HUSBAND" printed on it, and cracking jokes about being kept in an attic. Jones has a simple answer for doubters: Ingels makes her laugh every day and keeps life from being boring.

Her sexuality remains unabated, said the naturally youthful-looking Jones (healthy eating, daily exercise and no plastic surgery, she said). She is eager to quash the idea that age kills passion or friskiness.

"Luckily, Marty thinks I've still got a beautiful body, even though it is old, and every now and again I take all of my clothes off in front of him and shake my (breasts) at him, and he loves it," Jones writes in her autobiography, using racy slang for "breasts."

As she sees it, her own steady temperament made her crave an exciting, surprising partner, and both Cassidy and Ingels fit the description.

She met Cassidy as a 21-year-old small-town girl, a virgin, and "he taught me a lot about everything. Absolutely everything," Jones said. "I learned about life with Jack, about parties with Jack, drinking with Jack, design with Jack. He was bright, well-read, smart."

He was also repeatedly unfaithful to her, envious of her success and an inadequate father who late in life was diagnosed as bipolar, Jones said.

Her autobiography begins innocently enough, with Jones born in Charleroi, Penn., and moving as a toddler to Smithton, Penn., where her father helped run the family-owned brewery, the Jones Brewing Co.

She describes herself as a rebellious tomboy, "wild, willful and independent," who became obsessed with movies and their stars but intended to turn her love of animals into a career as a veterinarian. Talent intervened.

In 1953, on a post-high school graduation trip to New York with her parents, a friend introduced her to an agent who, immediately impressed, told her to attend an open audition with John Fearnley, the casting director for the songwriting team of Rodgers and Hammerstein.

After "going for broke" and singing "The Best Things in Life Are Free," a voice from the theater called out to Jones on stage, "Where are you from? And what have you done before?"

"Smithson, and nothing," Jones recalls as her flustered reply.

She received a part in the chorus for Rodgers and Hammerstein's "South Pacific" and then, a year later, the starring role in the duo's "Oklahoma!" — as well as the title of "Hollywood's new Cinderella," as Jones recounts in her book.

With the end of the big-screen musical era, Jones fought for recognition as a serious actress to win the role in "Elmer Gantry" and other dramatic fare. "The Partridge Family," about a widow and her musical family and co-starring David Cassidy, allowed her to work in Los Angeles and be home at night with her young children.

She didn't see Hollywood as exciting, Jones insisted. It was work, which she left behind each day when she returned to her roles as wife and mother.

"I liked my job, but when I came home, I never thought of it," said Jones, who still takes on occasional theater, movie and TV roles.

Of the many photos scattered around her house, all but one — a group shot showing the triumphant Jones and Lancaster on Oscar night — are of children and grandchildren.

Jones had a chance to reflect on her life anew while recording the audio version of "Shirley Jones."

"What came to me is, 'I did this, and obviously I loved it when I was doing it," she said. "I had a great time. I have no regrets whatsoever."