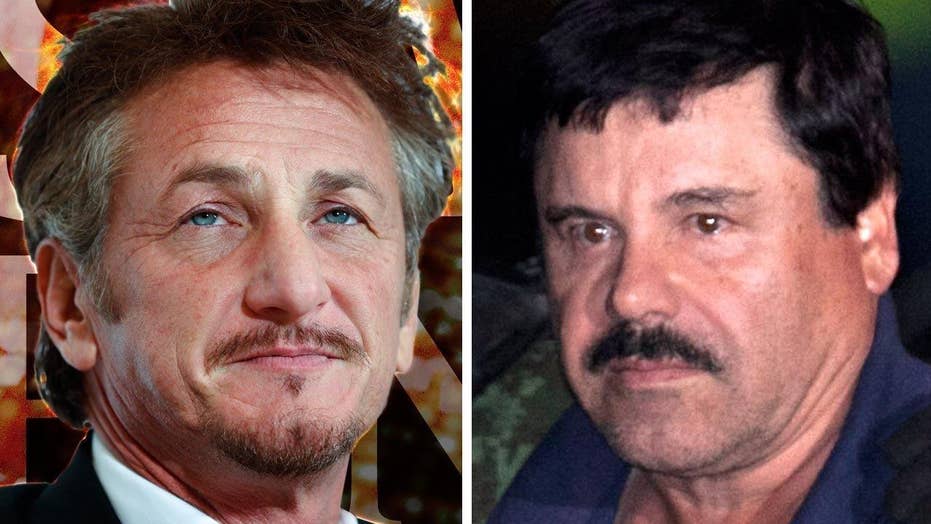 Did Sean Penn inadvertently do 'El Chapo' in?

Actor Sean Penn shrugged off criticism of his interview with drug lord Joaquin "El Chapo" Guzman that was published in Rolling Stone over the weekend, saying he had "nothin' to hide" about his contact with the notorious criminal.

Images published Monday indicated Penn was under surveillance when he met with the Mexican actress who led him to Guzman -- and the pair was apparently followed and photographed as they set out for the meeting with the drug lord at a hideout in rural Mexico in October.

The actor also shrugged off a suggestion that he was "taking hits" for agreeing to submit his article to Guzman prior to publication by Rolling Stone magazine.

"No, you're reading hits," he said in a brief email exchange with The Associated Press. In the article, Penn said Guzman requested no changes.

Guzman, who has escaped twice from Mexican maximum security prisons and is being sought for extradition by the United States, was recaptured on Friday after a bloody shootout in the city of Los Mochis in his home state of Sinaloa. He had been on the run of six months.

"The detention of the world's most wanted criminal is a credit to the coordination of our institutions in favor of security and the rule of law," Pena Nieto said. "With this action, 98 of the 122 most dangerous criminals no longer present a threat to society and we are going for all of them."

Mexico has begun the process of extraditing Guzman to the U.S., where he faces drug-trafficking charges, but that could take "a year or longer" because of legal challenges, said the head of Mexico's extradition office, Manuel Merino. He cited one extradition case that took six years.

Penn's interview with Guzman was published the day after the drug lord was recaptured.

Mexican officials have said that contacts between Guzman's lawyers and Penn and actress Kate del Castillo helped them track down the fugitive and they raided his hideout in rural Durango state a few days after their Oct. 2 meeting. Guzman evaded authorities then, but was finally captured months later in Los Mochis.

Penn wrote in the Rolling Stone article of elaborate security precautions, including switching phones. As he flew to Mexico for the meeting, he wrote, "I see no spying eyes, but I assume they are there."

The Mexican newspaper El Universal published 10 images Monday that appeared to show Penn being monitored as he arrived in Mexico.

In the photographs, Penn, wearing dark glasses and a baseball cap, is shown arriving with Del Castillo at an airport, then at a hotel, and greeting the men who apparently took them to a small airstrip, from which they flew to the jungle camp to meet Guzman. The newspaper said the photos were part of a Mexican government intelligence file it had obtained.

Penn has stressed that he doesn't think his communications were tracked, and in an interview with a local radio station, Attorney General Arely Gomez said that Mexican investigators were following the movements of one of Guzman's lawyers, not necessarily Penn or Del Castillo.

Asked whether Penn or del Castillo were under investigation, Gomez said a "new line" of inquiry had been opened that could include them or Guzman's lawyers, and could involve "covering up" for Guzman "or something bigger."

In an article accompanying the photos, El Universal said Mexican agents were aware of and following del Castillo's contacts with Guzman's lawyers since at least June. Del Castillo has not commented, but Penn wrote in Rolling Stone that Guzman was interested in having a movie made of his life and wanted del Castillo, who had portrayed a drug trafficker in a Mexican television series, involved in the project.

It was not Penn's first foray into Latin American life and politics.

The actor has become known in the region for befriending leftist leaders, including late Venezuelan President Hugo Chavez and Evo Morales in Bolivia. In 2008, he interviewed President Raul Castro for The Nation just after Barack Obama was elected U.S. president in what was billed as the Cuban leaders' first interview with a foreign journalist. He has also been widely hailed for the charity he founded in Haiti after its devastating 2010 earthquake.