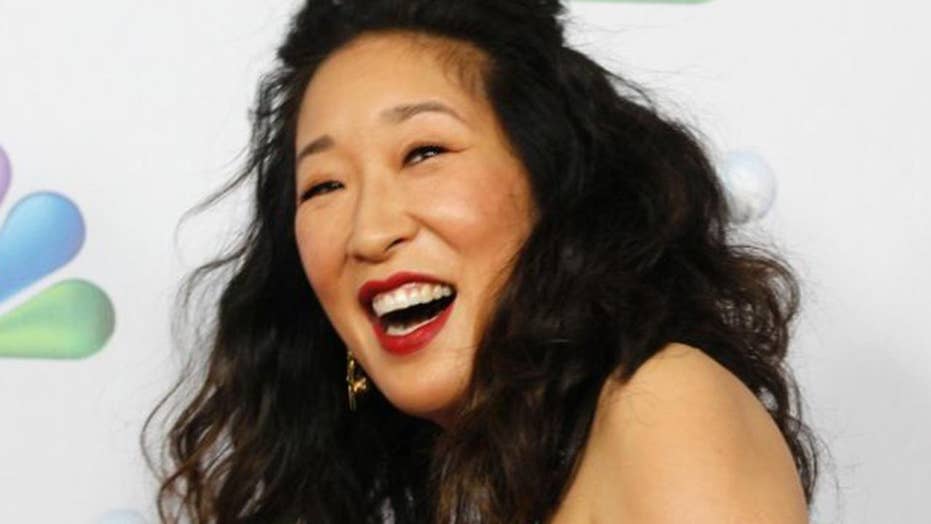 Top Talkers: The star of 'Killing Eve' becomes the first Asian woman to be nominated for lead actress Emmy.

Sandra Oh made history on Thursday as the first Asian woman to be nominated for a lead actress Emmy for her stellar performance on BBC America's "Killing Eve." Now, the actress -- who is Korean-Canadian -- is reacting to her history-making moment.

“I feel tremendous gratitude and joy with this nomination. I am thrilled for [creator] Phoebe Waller-Bridge’s nomination and for the entire cast/crew of 'Killing Eve.' I share this moment with my community," Oh said in a statement to ET, referencing the Asian community.

"P.S. I think my mother at this moment may actually be satisfied," the 46-year-old actress added.

Oh also took to Twitter to share a photo with friend and fellow actress, Michelle Krusiec, of the moment she found out she was a newly-minted Emmy nominee. "Omg wtf?? This is me hearing about Emmy nom w/ fellow sister @michellekrusiec - my expression is kinda ..what?," she wrote.

While this is Oh's first lead actress nomination, she is no stranger to the Emmys, having received five straight nominations in the supporting drama actress category from 2005 to 2009 as Dr. Cristina Yang on Grey's Anatomy. She has never won. Her nomination for Killing Eve would mark a historic moment if she is able to pull off her first career Emmy win.

Killing Eve also earned an Emmy nomination for Waller-Bridge in the Outstanding Writing in a Drama Series category for the episode "Nice Face." Waller-Bridge is the lone female nominee on the shortlist.

As one of just a handful of visible Asian actors working in film and television, Oh was candid when she spoke with ET in January about the importance of playing her part in showing that people who looked like her are capable of subverting stereotypes.

2018 Emmy Nominations: 11 of the Biggest Snubs and Surprises

"I feel acutely aware of how important it is and I absolutely want to be a part of it in the best way possible," Oh said at the time. "The best way possible that I know how is to find the most interesting material and to do my best work for it. It’s too important to not care about it or to not try and be out of the box in some sort of way."

"The central voice of the show is a woman. The lead characters are women," she continued. "The people producing are women. There is still a lot more work to do in diversity in front and behind the camera, but to be actively involved in creating something... Where can I go and see myself in some way?”

Oh said she hopes the Asian community continues to be proactive about getting their voices and stories out into the world (a la the upcoming big-screen "Crazy Rich Asians" adaptation and TV's "Fresh Off the Boat"). As she said, she feels more comfortable navigating this through creative avenues with color-blind roles like "Killing Eve" rather than politically.

“Definitely understanding deeply that it’s not enough and to encourage our own community to find its own voice in its own way, that’s one thing that I feel we have not found our own footing yet because it has to be from us, uniquely in us, and there’s a lot to explore in that because Asians are very, very diverse," Oh said.

"Having been actively working in this space, where there has not been much representation at all and being [one] of the only visible faces, I feel like this is the only way that it works for me, I only look at it creatively. Any other way just isn’t right for me."