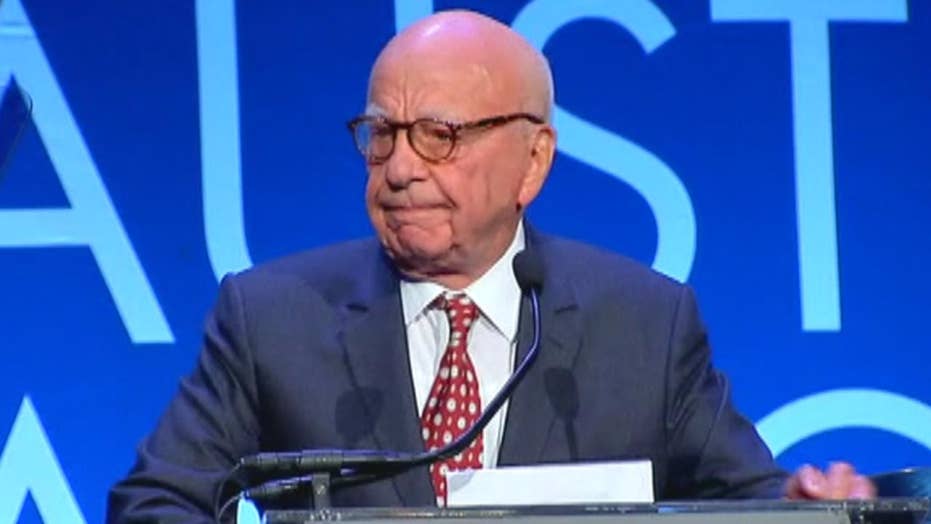 21st Century Fox and News Corporation executive chairman Rupert Murdoch was honored on Tuesday night at the 70th anniversary celebration of the American Australian Association, where he received the organization's inaugural Legends Award.

"There's something ominous about being labeled a legend," Murdoch joked. "You know, [Australian outlaw] Ned Kelly was a legend ... 'Legendary' means that you can either be celebrated or notorious and for the sake of decorum, I think I'll take the former."

"Rupert Murdoch has shaped the modern media landscape of news, entertainment, and sports on a global basis," National Football League Commissioner Roger Goodell said in his introductory remarks. " ... It is fitting that we honor Rupert with an award that celebrates both the country of his birth and the country that adopted him, for he has surely done much to improve both."

Murdoch was the guest of honor, alongside Lockheed Martin Corporation CEO Marillyn Hewson, at the lavish banquet at the famed Cipriani Wall Street – where funds were raised to help American and Australian scholars.

The American Australian Association was established in 1948 and is dedicated to advancing relations between the United States and Australia.

"The founding of the Triple-A 70 years ago symbolized and strengthened the bonds between our two great nations," Murdoch said. "... It is up to us to improve and enhance what we have been bequeathed ... Since the inaugural meeting of the Triple-A on October the seventh, 1948 through this day, the Triple-A has been a shining example of the power and the promise of the American-Australian alliance."

Tuesday’s celebration benefited the association's Education Fund, with the goal of providing opportunities through postgraduate education and Indigenous scholarship programs.

“These Education programs support the best and brightest next generation of innovative American and Australian scholars, to build research capacity, discover solutions to pressing global issues and foster ongoing international collaborations,” the association said before the event.

The association has invested over $7.5 million to support more than 300 American and Australian scholars since 2002.

Long before Murdoch became a naturalized U.S. citizen in 1985, he was a newspaper magnate in his native Australia – where he built a reputation for launching successful news operations.  He later acquired news organizations in the United Kingdom before making his way to the United States in 1973, when he purchased the San Antonio Express.

In 1986 Murdoch bought six television stations that formed the nucleus of the Fox Broadcasting Company, founded later that year. He founded Fox News Channel a decade later in 1996.