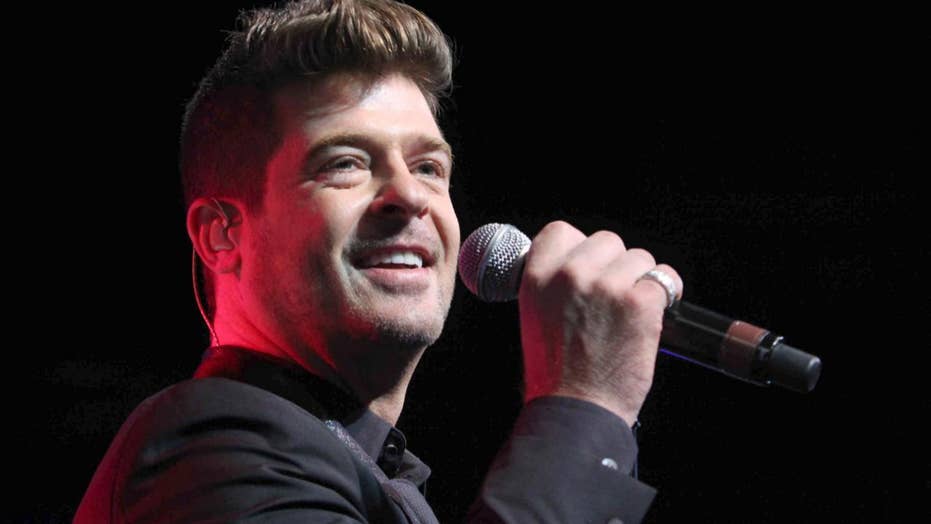 Before entertainer Robin Thicke hits the stage this New Year’s Eve, he opens up to Fox News about his 2018 and what 2019 is sure to bring.

When Robin Thicke looks back on his life in 2018, one word that comes to mind is “lucky.”

The 41-year-old “Blurred Lines” singer surprised his girlfriend, 24-year-old model April Love Geary, with a marriage proposal during the Christmas season with friends and family present.

Geary is also pregnant with their second child after giving birth to their daughter earlier this year. It will be the third for Thicke, who shares an 8-year-old son with ex-wife, actress Paula Patton.

Love is apparently in the air. The announcement comes just shortly after Miley Cyrus, who infamously shared the stage with Thicke for a raunchy performance at the 2013 VMAs, married actor Liam Hemsworth on Dec. 23 of this year.

“Congratulations,” shared Thicke with Fox News for the pair. “They’re a beautiful couple.”

Thicke also has plenty of other reasons to celebrate. The Grammy-nominated entertainer will bring in 2019 with a special performance at the third annual Marriott Marquis New York New Year’s Eve Show in Times Square.

Then on Jan. 2nd, Thicke will be participating in a new singing competition series titled “The Masked Singer” alongside Jenny McCarthy, Nicole Scherzinger, Ken Jeong and Nick Cannon.

And right before 2018 comes to an end, Thicke released the new music video for his song “Testify.” It’s his first musical release since 2016.

“It’s been a while since I put out an album,” Thicke admitted. “There’s been lots of different changes in my life since then. Lots of ups and downs. So it’s just about a lot of the things we go through in life, especially once you mature a little bit. And you know, good ol’ fashioned soul music.”


When it comes to “Testify,” Thicke held nothing back. ETCanada reported that in the song, he opened up about his failed decade-long marriage to Patton, Geary’s miscarriage before the couple welcomed their daughter, as well as the sudden death of his father Alan Thicke.

The Canadian actor, best known for playing beloved patriarch Jason Seaver in the hit ‘80s series “Growing Pains,” passed away in 2016 at age 69. The New York Times reported Alan was playing hockey with his 19-year-old son Carter when he suffered a heart attack.

The celebrity news site added Thicke wrote the record at his home in Malibu which recently burned down during the California wildfire crisis.


“I think it’s cathartic as an artist to tell the truth and put it into song,” said Thicke. “But also, I’ve always shared my life in my music. It’s just what I’ve done since day one.”

Thicke revealed he had no regrets opening up about losing his father in front of an audience.

“I want to honor him as much as I possibly can,” he said. “That just happened to be what I was feeling that day. Losing him and the new feelings that come about when you lose somebody that important in your life.”

Thicke stressed that one of Alan’s many pieces of advice has been on his mind as he embarks on the next chapter of his life during the New Year.

“He always said just to enjoy the experience of life, family and career,” said Thicke. “Not to live too much in the past or look too far into the future. Really embrace and enjoy everything that you have right in front of you.

“We all want to accomplish so many things. I’ve really learned to enjoy each day and each week. Instead of looking too far into the future, I’m excited about my new shows. I’m excited to have another child. I’m excited to put out new music. But really, there’s so much right in front of me every day. I just focus on what’s happening from moment to moment.”

Thicke’s upcoming album is set to premiere sometime in April 2019. But these days, Thicke is enjoying the process of creating new music, along with being surrounded by his children.

“I haven’t spent as much time on the road since my son was born,” he reflected. “I did of course during the ‘Blurred Lines’ years. But besides that, I really love to just be home. I love to create music. I’ll go where the road takes me, but I like being home with my family.”

“[But making music], it’s necessary for me. It’s what I do. It’s who I am. Making music is much of me as my name or my children. My music is my soul. It’s also my memoir.”

Some reports insisted Thicke has experienced a religious awakening while recording “Testify.” Thicke himself recently told Apple Music Beats 1 radio show that the “reconnection to God or spirituality or something deeper than the surface is what brings you back home to who you really are and who you want to be.”

Thicke clarified to Fox News that “Testify” explores how he was able to see the light at the end of the tunnel while dealing with loss and personal pain.

Thicke credited music for not only keeping him busy but also helping him heal. And now, he’s eager to see what 2019 holds for him.

“It really just comes down to work ethic,” he said on the advice he would give to other aspiring artists. “If you outwork the people next to you, good things will happen. You can never give up on your dream.”