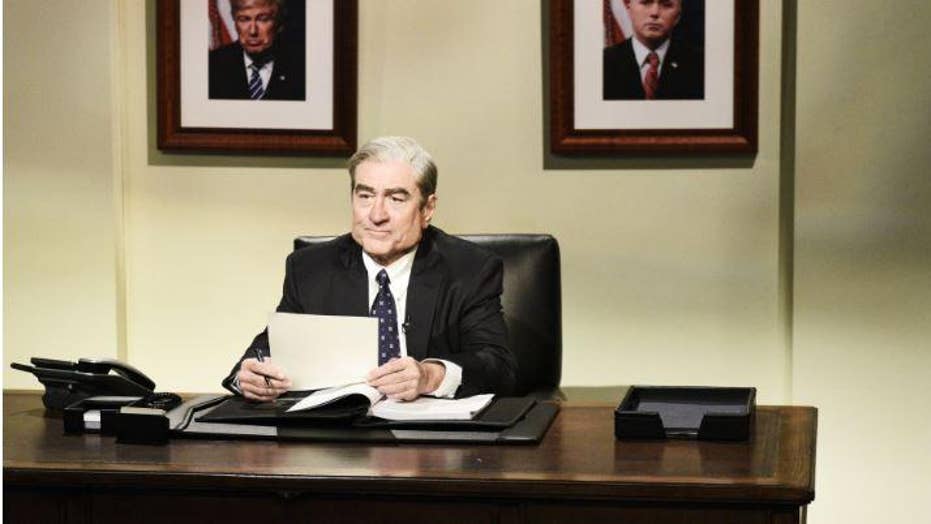 The 75-year-old actor is rarely shy about sounding off on the Trump administration and the GOP whenever he gets a chance. Following former special counsel Mueller’s testimony on the findings of his Russia investigation, De Niro penned his essay in which he explained how he would have “played” the moment differently as an actor.

“I don’t want to criticize Director Mueller as an actor, so let’s just say my approach to the part would have been different. Mueller chose to play himself as a calm, confident, dignified public servant. His ‘backstory’: a patriot serving his country from the battlefields of Vietnam to the battlefields of Washington, D.C.,” the star wrote. “That’s a valid acting choice, don’t get me wrong. But I, more of a method actor, would have channeled my inner rage at the years of Donald Trump’s illegal and immoral acts, and I would have been more in touch with my fury after two years of Trump and his stooges accusing me of running a witch hunt. I would have dropped the unruffled exterior and been more, let’s say, expansive in my response. I may have dropped an f-bomb or two or eight.”

ROBERT DE NIRO DOUBLES DOWN ON ROBERT MUELLER, BELIEVES HE CAN PUT DONALD TRUMP ‘AWAY FOR A LONG TIME’

De Niro went on to explain that, despite the testimony being uneventful, Democrats didn’t need Mueller to call for impeachment publicly, arguing that the findings in his report give Congress all they need to move forward.

“Even before Wednesday’s testimony, the report gave the Democrats what they had expected: detailed documentary proof of Russia’s aggressive interference in our democratic process, evidence of Trump’s criminal obstruction of justice, and a diabolical catalogue of his campaign’s encouragement of Russian aid in electing him. The Democrats’ hope was to get a strong confirmation in Mueller’s own voice. They got that, too, albeit in undramatic, monosyllabic responses. If it turns out the Democrats want more — and I want them to want more — then Mueller’s report and testimony gave them all they need for impeachment: high crimes, misdemeanors and, though not required, a flock of felonies.”

Mueller’s report and testimony gave them all they need for impeachment: high crimes, misdemeanors and, though not required, a flock of felonies.

The surprising op-ed prompted many to take to Twitter to share their frustration with the actor’s comments, noting that he’s made a name for himself as of late playing the role on “SNL.”

“This is a man that plays pretend for a living. He could never do any of the things he pretends but the rest of us do it for real every day. Just another man child playing pretend,” one angry user wrote.

“Just an old, rich, notoriously inarticulate man going "I uh I think ah Mueller is uh a I think we have to y'know hold people to account,” another noted.

Others took a shot at the Washington Post for even publishing the star’s guest essay, a practice that several editorial publications often allow.

“this is why Americans hate the biased liberal mainstream media propaganda hacks and their fake news,” one user wrote.

“Well folks, it's 2019, and supposedly this is one of the most important news sources in our country. God help us,” one user joked.

Some users, though, agreed with De Niro’s assessment of the situation for impeachment.

“America didn't need an Oscar worthy performance.  Mueller gave us plenty: The truth, the whole truth, and nothing but the truth,” another user noted. “Trump is deeply disloyal, aided Russia's attack on the U.S. election, to his benefit, and has abused the power of the Presidency to cover it up.”

De Niro concluded his post by suggesting that, with Mueller fading from the public spotlight, he’d like to be tapped by the popular sketch show for a new role.

“And what about me? Well, as Robert Mueller vanishes from public scrutiny, my opportunities to play him will fade, as well. It’s okay. I’m ready to move on,” he wrote. “I think I could do a really good Jerry Nadler, my own great congressman and the chairman of the House Judiciary Committee. The last time I gained and lost weight to play a scrappy New York street fighter (for “Raging Bull”), I won an Oscar.”