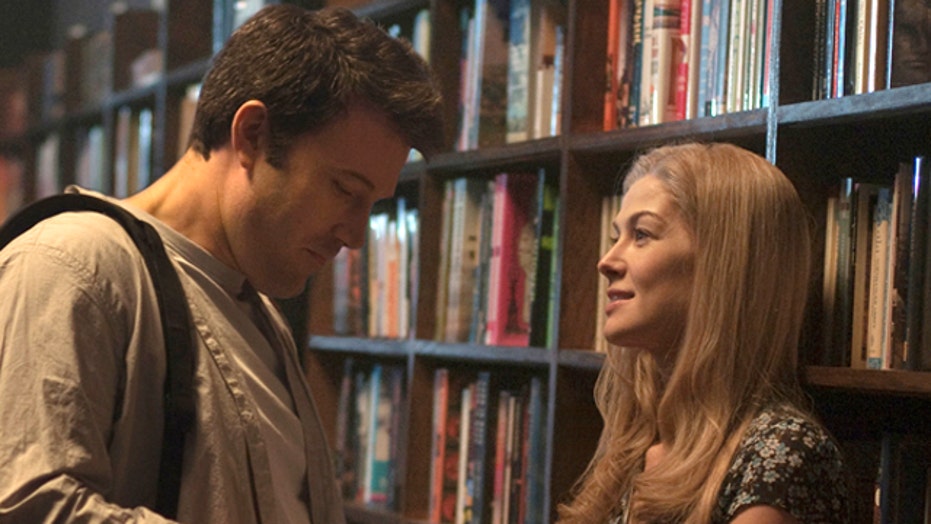 Gillian Flynn's book struck a popular nerve when it was released in 2012, becoming a smash bestseller and frequent topic of conversation at water coolers everywhere. For those who have not read the book, you are in for one twisted treat. If you have read the book, director David Fincher nearly improves upon the story with his indelible sleekness, satirical spin and great performances.

Nick and Amy Dunne (Ben Affleck and Rosamund Pike) seemingly have the perfect marriage but when Nick discovers she is missing, his quiet, docile world unravels into chaos. Amy, the daughter of famous writers who created a series of children’s books called ‘Amazing Amy,’ becomes a national media story as her search expands. Did Nick kill his wife? If he didn’t, who did and why? Why does Nick seem so indifferent, so apathetic to her disappearance? The longer Amy is gone, the deeper the hole he digs.

Flynn’s own adaptation from page to screen is excellent. The film is quite faithful to the book (those worried that the ending was changed for the movie can rest easy. It's unchanged) and Fincher’s strength is retrofitting the novel into a two and a half hour rampaging beast. The film moves at a dizzying clip with credit due to the fantastic editing by Kirk Baxter.

Affleck steps up his game as Nick Dunne, giving the best performance of his career. Since Affleck has become a superb director, his acting skills have greatly improved. But here Fincher brings out the best in Affleck, pushing the actor into uncharted territory. The role of Nick Dunne a perfect fit him; he effortlessly captures Nick’s surprising apathy, aloofness and sometimes brazen cockiness. Affleck allows the audience to wrestle with whether or not they should sympathize with him or be repulsed by him. Affleck hasn’t really had a chance yet to play a character with so much to mine and he nails it.

If you didn’t know who Rosamund Pike was before “Gone Girl,” you won’t soon forget her after this. Like Nick, Amy is a complicated character and Pike is devilishly good at balancing how the audience should react to her - love her or hate her. As Flynn and Fincher unravel the events surrounding Amy’s disappearance, we become more familiar with her through various moments of her marriage to Nick, and with each scene Pike is fascinating as she continuously messes with our expectations. Nick and Amy are a one disturbing couple and Pike and Affleck make them even more compelling.

The supporting cast is also tops. Carrie Coon (“The Leftovers”) as Nick’s twin sister Margo and Kim Dickens (“Sons of Anarchy”) as the leading detective are outstanding. Their spitfire delivery and candid assessments of the mystery at hand are some of the highlights of the film. Tyler Perry is also a whirlwind of energy as the celebrity lawyer Tanner Bolt. And then there’s Neil Patrick Harris like you’ve never seen him before – an absolute creepster.

Fincher loves exploring the dregs of humanity and “Gone Girl” is no exception. Flynn has created some of truly despicable characters, and while the film may not deliver the same visceral reaction the book does, Fincher does deliver quite a few shout-at-the-screen moments. Once Flynn unravels her mystery, we are taken down that expected Fincher-ian rabbit hole of darkness and despair.

But wait! “Gone Girl” is also quite funny, which is absolutely necessary for this story, which could easily turn into a soul-sucking, overly cynical and depressing yarn. Fincher takes everything with a grain of salt, from the satirical take on “perfect marriages” to how the media turns stories of missing rich white women into a circus and finally how local police handle high-profile cases.

Fincher’s team gives Flynn’s story a slick shellacking. The dreamy cinematography by Jeff Cronenweth bathes the film in amber, giving sheen to the grime hidden beneath Nick and Amy’s seemingly perfect marriage. Fincher reunites with Trent Reznor and Atticus Ross, whose score ebbs through each scene like incessant spa music.

For fans of the book and of David Fincher’s previous films, “Gone Girl” is a must-see. It’s also cheaper than couple’s counseling.