The director spoke out in reponse to Thurman's story published in The New York Times on Saturday where she alleged disgraced producer Weinstein assaulted her, and Tarantino almost killed her in a stunt that went awry.

Tarantino told Deadline on Monday that he did not force Thurman to drive a car nor did he angrily confront her as Thurman alleged in her Times story. He did admit that he may have rolled his eyes and was irritated at Thurman's reservations about doing the scene. Thurman said Tarantino would not take "no" for an answer.

"I’m sure I wasn’t in a rage and I wasn’t livid. I didn’t go barging into Uma’s trailer, screaming at her to get into the car,” Tarantino told Deadline. “I can imagine maybe rolling my eyes and thinking, we spent all this money taking this stick shift Karmann Ghia and changing the transmission, just for this shot.”

Tarantino admitted his relationship with Thurman changed following the crash.

“It affected me and Uma for the next two to three years. It wasn’t like we didn’t talk. But a trust was broken,” the “Pulp Fiction” director said. 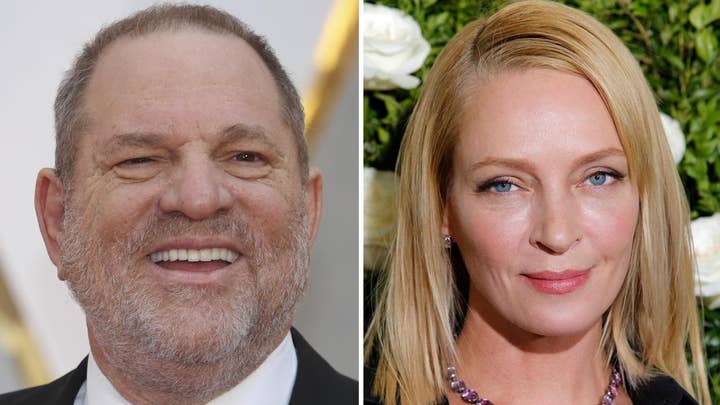 Thurman told The New York Times she worked for years to get footage of the crash that left her with permanent injuries. She said she fought with the director to get the footage but did not receive it until 15 years later.

Tarantino said it took him a while to find the footage but was “so happy” when it was found.

“She wanted clarity on what happened in that car crash, after all these years. She asked, could I get her the footage? I had to find it, 15 years later. We had to go through storage facilities, pulling out boxes,” he said.

Tarantino also addressed Thurman’s account of Tarantino spitting and choking her for scenes in “Kill Bill: Volume 1.” Tarantino balked and asked Deadline “what’s the f------ problem” with a spitting scene.

Thurman told The New York Times she worked for years to get footage of the crash that left her with permanent injuries. (Miramax)

Tarantino explained he did the scenes because he did not trust Michael Madsen, the actor who “spit” on Thurman in the movie to do it correctly.

UMA THURMAN RELEASES CRASH FOOTAGE FROM ‘KILL BILL,’ SAYS WEINSTEIN AND OTHERS TRIED TO BURY IT

“Naturally, I did it. Who else should do it? A grip? One, I didn’t trust Michael Madsen because, I don’t know where the spit’s going to go, if Michael Madsen does it. I talked to Uma and I said, 'Look. I’ve got to kind of commit to doing this to you,” he said.

When asked about the choking scene, Tarantino explained he did the same thing to Diane Kruger when filming “Inglorious Basterds.” The director claimed the actresses trusted him to do the scenes right.

When asked how his relationship with Thurman is now following the interview, the director said they were OK.

“We’ve been talking about it ad nauseum and I feel bad because she has been doing a Broadway play, at the same time. The whole weekend, we’ve been talking. The uproar that happened against me, she was not prepared for. We have a long complicated history. We have been dealing with it for 22 years,” Tarantino said. The director said Thurman blamed him for not talking to Dowd for the interview but the two were never able to get together.

Tarantino said he took a lot of heat for the crash but said other people were responsible for trying to cover it up.