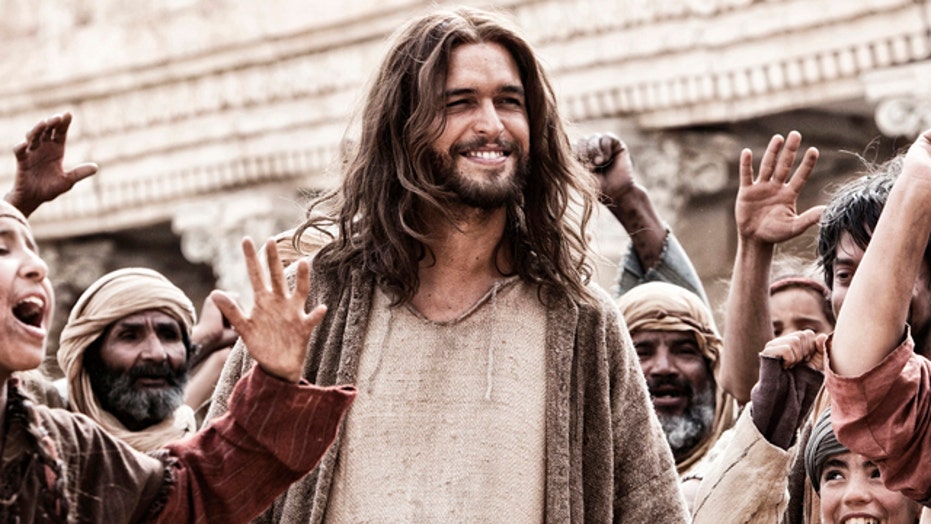 The highly-anticipated film “Son of God” premieres Friday, and producer Mark Burnett says his film should have a pretty sizeable built in audience .

“In general media circles people can say that people get uncomfortable around God. But actually, more Americans as a community go to church than do anything else. More Americans go to church on Sundays than watch football,” he told FOX411. “’Son of God’ illustrates that in such a huge way that [this is what] Americans desire. Their hope. What does this nation stand for? The Bible and free enterprise are the two things that built the nation.”

Directed by Christopher Spencer and starring Diogo Morgado, "Son of God" is being marketed as a major motion picture event that “brings the story of Jesus' life to audiences through compelling cinematic storytelling that is both powerful and inspirational,” complete with exotic locales, dazzling visual effects and a rich orchestral score. The film tells the story of Jesus' birth, his teachings, crucifixion and ultimate resurrection.

Yet this movie isn’t just for the devoted. Burnett’s wife and producing partner Roma Downey stressed that the film was also created with the intention of detailing the story of Jesus Christ for those who aren’t familiar with it.

“If you came to the movie and you didn’t know anything about Jesus you would really get a sense of the journey of his life. It was our job to make sure that the journey emotionally connected with you,” she explained. “So we told the story on the one hand as a political thriller and at the same time, it is a beautiful love story. There is intimacy to it, and we hope that you’re drawn in, that you are emotionally engaged and that you get a sense that you really know who Jesus is.”

But beyond the power of prayer and devotion, Burnett stressed the importance that people of faith taking action in their everyday lives.

“Every decade you get smarter and more aware of who is really in control, which is God, and praying is very, very important. But it is also important for people to know that you do have to actually get off the couch and do something,” he said. “You can’t sit at home and pray and think that someone is going to knock on the door and give you a job or start your business or deliver your movie. You need to pray and have faith, and when you have a calling take some action.”

And in the wake of his hit History Channel series “The Bible,” Burnett already has the next scriptural series in the pipeline.

“We’re working on a series called AD, which starts at the crucifixion and we’re hoping Diogo will be in it. It tells this dramatic story of what is going on in that first century,” he added. “The disciples didn’t know they were in the Bible. They were living their lives; they were following a charismatic leader who they think may be King David, and following them. It’s only revealed much later that it’s actually the Son of God. So very tense times, but in that epic scale there is this intimate, beautiful love story.”