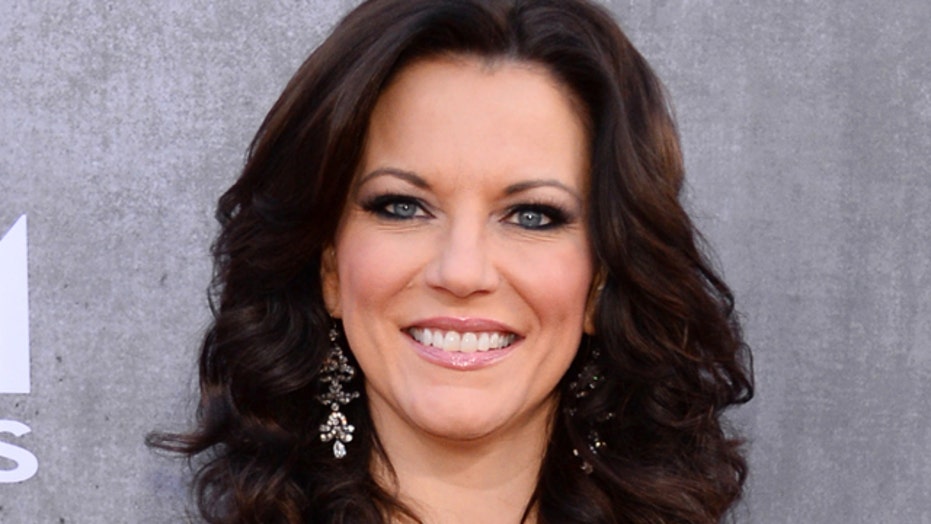 They say the eyes are the window to the soul, but if you’re looking to explore Martina McBride’s soul, you can’t be afraid of fire. Crystal blue, razor-sharp and focused, McBride’s gaze is friendly, but not foolish.

“I’m very Midwestern,” she says, laughing, “so everything looks very good from the outside.” It’s mid-afternoon on a bright but chilly April day in Nashville, and she’s curled up in the corner of a faux-leather sofa, her shoulders squared like a lion’s. “I struggle with things just like everybody else. We’re all dealing with something. Whether it’s working something out or figuring something out or ‘How do I do this?’ or ‘Where do I go from here?’”

McBride is a mother, a wife and a businesswoman, each role with its own challenges, and with her Heartland façade, she appears to flick away trouble like cigarette ash gone cold. But it’s not always so simple.

“The past few years I’ve actually struggled with confidence,” she confesses.

McBride is a singer who has never paid much attention to what’s hot in country music. She doesn’t chase down buzzworthy songwriters. Her song selection process involves her in a room or car listening to several hundred unidentified demos to find the 10 that work best for whatever stage of life she finds herself.

That approach has worked so far: She’s achieved seven straight platinum or multi-platinum albums; seven total Female Vocalist of the Year wins, including three straight at both the Country Music Awards and the Academy of Country Music Awards. There is also the general sense that she was the female voice of a generation. Songs that define her era — “Wild Angels,” for example — are considered ahead of their time.

Her last album of original songs, Eleven (2011), was recorded on Republic Nashville after a break from longtime label RCA. Creatively, there were breaks too. Lead single “Teenage Daughters” aimed the speakers at McBride’s oldest daughter, Delaney, instead of at her husband, John, who’d always served as chief counsel. The song peaked outside the Top 10, a disappointment. Follow-up single “I’m Gonna Love You Through It,” a cancer battle anthem, went Top 5. Closing out the cycle, “Marry Me,” her duet with Train’s Pat Monahan, fell on deaf ears despite a memorable introduction during the 2012 ACM Awards. McBride then parted ways with Republic and cut the self-released standards album Everlasting (2014), touring it for almost two years. But without a label behind her, she felt edged out of radio. The nominations slowed. The conversation changed.

“It’s interesting, because I get different questions now,” she says carefully. “I was telling John last night, I don’t know when it happened, but somewhere along the line I’m asked about the new people that are coming up and the current country music situation like I’m not part of it. Like I’ve somehow gotten pushed over here somewhere.”

"Does it bother you?" Taste of Country asks.

“It’s just … an adjustment, I guess,” McBride says, “because in my head and my heart I feel like [Reckless] is one of the best records I’ve ever made. I feel like it’s competitive and I’m happy with it.”

Songwriter Brett Warren saw signs that McBride’s confidence suffered during the five-year break between Eleven and Reckless, her thirteenth studio album due April 29 via Nash Icon.

“It was her and Faith Hill and a few of the big female artists and they were passing the torch down to [the next generation of artists],” Warren recalls. “It felt like that time in an artist’s life where it’s like ‘Okay, you’re no longer on the cutting edge, you’re sort of more a legend,’ Which is a great status to be at, but in their minds, people who have been successful for a long time like Martina has, they still have a lot of stuff to say and do.”.

Somewhere along the way McBride rocked forward off her heels to the balls of her feet once again. Today she speaks with an excitement and a swagger that those close to her say wasn’t there two or three years ago. When producer Nathan Chapman suggested a major shift in how she recorded vocals for Reckless — a move comparable to asking Colonel Sanders to tweak his original recipe — she agreed enthusiastically. Everlasting producer Dann Huff returned for the new project as well.

The title track came first and hit hard. “I’ve never recorded a song as vulnerable as this one,” McBride admits. “I was tearing up in the vocal booth because I was just so grateful for the song,” she says. “And after doing Everlasting, which was so much fun and a great project for me personally — but they’re cover songs and it is what it is — to come back and make a country album and have a song that I had such a connection to was so moving to me.”

Lyrically, “Reckless” builds a window for the singer to talk about elements from her past for the very first time. She was 20-year-old Martina Schiff, rebellious and headstrong, when she met her future husband, John. The people around her weren’t great, she says, adding that she was singing at a bar or club five nights a week and often tending bar the other two.

“He came along and he found me in that period of time,” she recalls. “He just really was reckless enough to not go, ‘Oh, wow! That looks like trouble.’ He loved me unconditionally and really lifted me up and kind of saw who I really was.”

Huff recalls “Reckless” being their biggest challenge on the record because they all envisioned the song differently. Chapman remembers both producers inviting different players to try different parts. The process took days. McBride remained opened to changes but didn’t mind letting them know it wasn’t working.

“Martina was actually the one who said, ‘Our initial instincts are the ones that feel true to me.’” The end result is a layered arrangement that includes parts from two bassists and two drummers.

The back-and-forth between the three paid off in other ways. Collaboration is a two-lane road, and McBride enjoys being told why she’s wrong. Chapman literally retaught her how to record vocals. Instead of laying down an entire vocal multiple times and discussing, he would stop her after a phrase or a verse and they’d talk about it and continue. The immediate feedback fed her creativity.

“She doesn’t like to be left in the dark,” Chapman says. “She wants to know what you think of the vocals, the guitar part, the song. She’s very into getting feedback from her collaborators and you can’t offend her.”

Big Machine Label Group president Scott Borchetta says that McBride is very hard on herself. The singer mostly agrees. She’s a perfectionist, unafraid to correct one of the most influential men in the music business.

“I want it to be great and my standards of great are pretty high,” McBride says. “I don’t do anything sort of halfway.”

The heart of McBride’s struggle is that, like fellow Nash Icon artists Reba McEntire and Ronnie Dunn, she’s not done yet. Not even close. Reckless employs Nashville’s top songwriters, plus a few newcomers that push her in new directions. And vocally she’s still the Martina McBride. That script about a veteran vocal powerhouse losing her touch — that’s not hers. Turning 50 isn’t frightening.

“I don’t even know what it means,” she says of the milestone. “To me, I feel more comfortable in my own skin. I wouldn’t have had this conversation with you five or six years ago.”

To that end, Reckless is hopeful. No track showcases that hope better than “Just Around the Corner,” chosen to represent her journey to now, those lessons of humility, gratitude and faith. She’s worked through her confidence issues. “I feel like I’m on the other side of that or heading there anyways.” The song speaks to her, she says.

Last spring McBride became a voice of the overdue battle to find balance between men and women on country radio. Consultant Keith Hill referred to women as the tomatoes in the salad that is a radio playlist, saying men were the lettuce that make up the bulk of what’s heard, and the rest are just extras. The controversy was dubbed Saladgate, and by June, McBride ordered a line of his-and-hers Tomato and Tomato Lover T-shirts. Not coincidentally, seven of the 10 songs on Reckless are written by women.

“It was hard for me to find songs for this record,” she admits. “It was hard. I looked for a really long time at a lot of songs because there aren’t a lot of songs being written for females right now, lyric-based songs, songs that are really powerful and strong. It’s concerning to me because if your songwriting well dries up for female artists, they record maybe not-so-great songs, or songs that are more fluffy, for lack of a better word. Then they don’t get played because they’re not great songs. It’s just a huge domino effect that comes from that mindset, and I thought it was really dangerous.”

Near the end of our two-hour sit-down, McBride concedes to having a heavy heart. Merle Haggard died 24 hours earlier, and in addition to losing someone she’d gotten to know over time, she worries who will carry on his legacy.

“It’s not like we don’t have that music,” she says wistfully. “We’ll always have that music. But his voice was just so amazing, and his songwriting! There’s just a finality about it.”

Haggard’s last radio hit came in 1989, when he was 52 years old but after 20-plus years of chart success. He’ll be remembered not for his No. 1 hits or sales certifications, but for his influence on a generation. So often, extraordinary importance is placed on tangible success when in fact emotion, individuality and artistry are what build legacy.

McBride says she learned long ago not to worry about what she can’t control. There is so much that can’t be controlled after the record is released — airplay, chart position, awards, legacy. Why fret? The process behind Reckless ended with the singer re-learning this lesson. In many ways she’s still the same Martina, but where once she was lost now she is found.