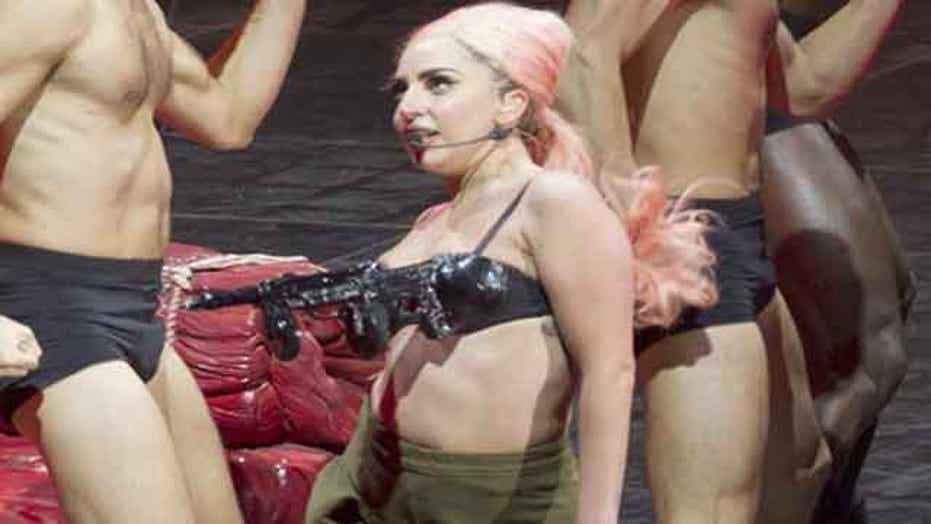 LOS ANGELES – Lady Gaga’s eccentric wardrobe has been slammed yet again, but for different reasons than she's used to.

During her Friday show in Vancouver, Canada, the controversial performer donned a bra (nothing new) that was adorned with plastic assault rifles (also nothing new, as she has been wearing the costume since 2010 – including on the cover of Rolling Stone.) But in the wake of the Newtown school shooting tragedy, critics are now slamming Gaga for her “insensitivity” and are calling on her to ditch the weapon-touting outfit.

Tom McKay of PolicyMic.com ignited the firestorm this week by claiming that Gaga’s get-up is “tasteless and offends both sides of the gun debate,” and emphasized that her costume choice was made even worse by the fact it was worn the day after Vice President Biden met with members of Congress and the NRA to discuss the looming issue of violence and gun control.

“Lady Gaga’s decision to don a gun-toting brassiere – undoubtedly with full awareness of its disturbing implications – is tasteless and inappropriate,” he continued. “It rubs salt in the wounds of pro and anti-gun advocates, and much trashier, the wounds of despondent and horrified community that just lost 20 children.”

Los Angeles-based therapist Nancy Irwin concurred that the costume is indeed senseless and rude, but theorized the resulting condemnation was precisely the PR the pop star was seeking.

“She is famous for her outrageousness and controversy, not for being sensitive to heartbroken parents and those who are traumatized,” Irwin noted. “Sometimes costumes cross the line from harmless to harmful.”

According to Hollywood publicist Roger Neal, the get-up was a step too far for the routinely jaw-dropping entertainer.

“Lady Gaga or her people should have caught this. It could be a deliberate attempt to get extra press, record or ticket sales, or they may have just overlooked it being on auto pilot during the tour,” he said. “However, stars on this level should be sensitive to these kinds of things and take the extra moment and make small changes to be sensitive to a national tragedy.”

However, others claim the latest Gaga get-up controversy has been over-dramatized.

“It is important to note she is an entertainer who is known for her over-the-top fashion choices.  While the tragedy in Newtown has resulted in a debate over gun control and the entertainment industry's role in glorifying gun violence, this seems like another attempt to ignore issues like mental health, fire arm education and personal responsibility,” said political and pop culture commentator Rachelle Friberg. “Instead of pointing the finger and overly reacting to an entertainer's choice of costume, perhaps it is time to get serious about this issue and stop calling foul and overreacting when celebrities choose to express themselves solely for the value of entertainment.”

Entertainment writer Ariane Sommer agreed that the critics lashing out at Lady Gaga, not the songstress, are the ones out of line.

“I doubt Lady Gaga is advertising gun violence. She likely is using the guns to symbolize her sexuality as a weapon,” Sommer added. “The right to express ourselves freely, even if we might not always agree with each others’ forms of expression, is one that is fundamental to a democracy. Don't confuse art with politics.”

Lady Gaga's rep did not respond to a request for comment.