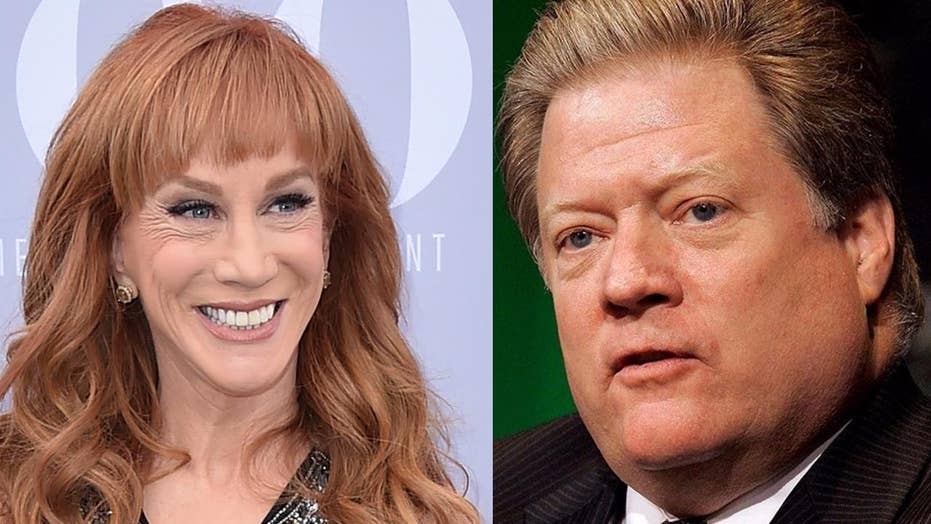 Fox411: Kathy Griffin's millionaire neighbor reportedly went on an expletive-filled tirade against both her and her longtime boyfriend after the star called the LAPD to file a noise complaint

Kathy Griffin’s ongoing feud with her neighbor is just heating up.

The comedian’s neighbor who just came under fire for his verbal tirade against Griffin has filed a restraining order against her claiming she and her boyfriend spy on him and his family.

Jeffrey Mezger, the CEO of KB Home and Griffin’s neighbor, filed for the restraining order Wednesday in Santa Monica, Calif., and a hearing on the accusation was slated for next Tuesday, People reported.

Griffin filed her own restraining order against Mezger two weeks ago after the comedian and her neighbor got into an altercation. Griffin’s boyfriend, Randy Bick, called in a noise complaint on Mezger.

Mezger claimed Griffin and Bick have been recording and filming conversations he has had on his property for more than a year, the restraining order filing stated.

“Ms. Griffin (and/or cohabitant Randy Bick) has admitted to making audio (and video) recordings of private conversations on my property over the past 15 months. In addition, Griffin (and/or Bick) have aimed an outdoor video-recording device at areas including a Jacuzzi where my young grandchildren sometimes play,” he says along with a photo of the specific outdoor camera,” the order stated.

“We have also been forced to keep the windows that face the Griffin-Bick residence closed with the blinds drawn at all times, to reduce the chance of becoming the unwilling subject of further illegal recordings,” Mezger claimed in the order.

The file concluded: “Ms. Griffin and Mr. Bick have completely deprived my family and me of the use of our yard, and have essentially rendered living in our home intolerable.”

Last month, Bick reportedly called in a noise complaint on Mezger after hours of excessive partying on the CEO’s property.

KATHY GRIFFIN: ‘I DIDN’T DO ANYTHING WRONG’ IN TRUMP BEHEADING PHOTO SHOOT

Mezger fired back reportedly shouted homophobic expletives at Griffin and Bick, calling her a, “c—t,” “d—e,” mocking her shaved had and bringing up her severed head photo controversy.

The controversy he was referring to was when Griffin came under fire for a photo of her with a fake severed head of President Trump.

Griffin shaved her head out of solidarity for her sister Joyce Griffin, who died of an undisclosed form of cancer on Sept. 14.