NEW YORK – Kanye West, Lamar Odom and the rest of the Kardashian-Jenner family took over Madison Square Garden on Thursday with a heavily narrated event that wasn't quite a concert nor just a fashion show.

The Yeezy Season 3 debut at New York Fashion week drew thousands of millennials, eager to see what antics West had planned for his annual Fashion Week appearance. The fans wore French braids-- alluding to Kim Kardashian's most recent hair obsession-- and baggy sweats along with Yeezy T-shirts and other signature looks from the brand.

West showed off his new line in a presentation with dozens of models standing and at times shuffling around on two tarp-covered stages and on the Madison Square Garden floor. The models were dressed in warm tones and in both skin-tight looks and baggy ensembles.

The rapper also played his new album, not choosing to perform it live but rather play the music from his iPhone, at full volume over the venue's speakers.

West turned up with Odom, who used the show as an opportunity to publicly step out for the first time since he was found unconscious in a Nevada brothel and nearly died.

In a red sweater, West gave Odom a hug before sending the former basketball star to a seat alongside the likes of Kim Kardashian, Anna Wintour and Caitlyn and Kris Jenner.

West's wife, Kim Kardashian, had daughter North in tow, though newborn son Saint-- who some speculated would make his debut at the show-- was nowhere to be found.

The Kardashians were dressed in opulent furs and mostly white for the occasion.

Unsurprisingly, West paused his music at various points to make speeches to the crowd. He thanked Adidas for their support and promoted the crowd to chant "f--k Nike."

He also spoke briefly about Michael Jordan demanding respect for Jordan and declaring, "I wouldn't be here without Michael Jordan." He thanked God and talked about his faith and repeatedly praised his own work.

The Kardashian entourage was seen exiting their seats about an hour into the show, though it was far from over.

“Is it ending? The Kardashians are leaving,” a puzzled fan asked on Twitter. Another quipped, “Kardashians are now leaving the building, like they have something better to do.”

West stayed to play more of his music and rant. Perhaps the strangest moment of the show came when the rapper decided he wanted to debut a promo for a video game he is working on.

“The idea of the video game is my mom traveling through the gates of heaven,” he explained to the crowd.

When the audience didn't immediately cheer loudly following the promo, the rapper played it again and explained how impressive his work was.

“That’s not easy to do man,” he said after the paltry applause. “Ya’ll just acting like this s--t is normal.”

Throughout the show, the rapper gleefully bopped to his music and celebrated with his entourage, despite a series of technical difficulties that at times caused the music to cut out and scratch.

West eventually excused himself to go meet up with his wife and family backstage, and he instructed his creative director to keep the party going for the fans. Still, many followed suit and left when West did. 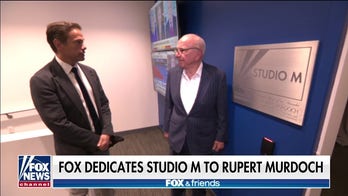