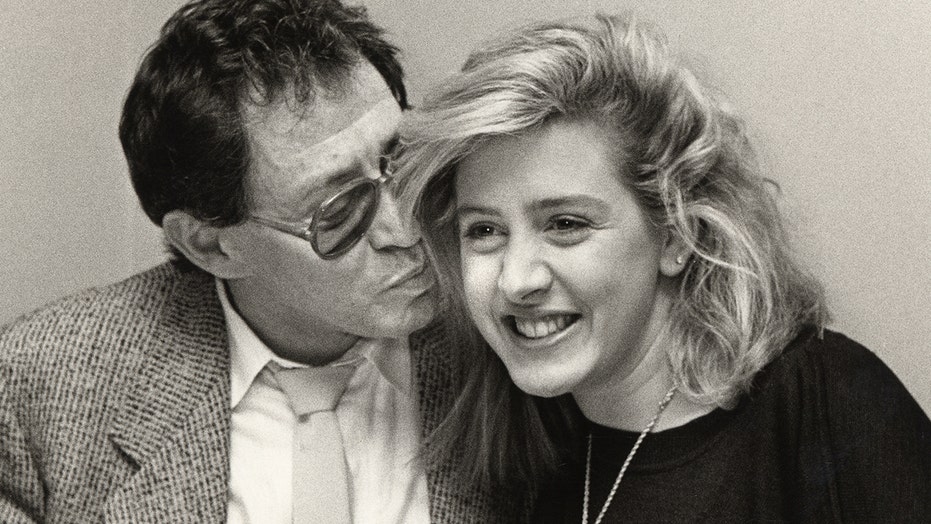 The actress is the daughter of star Connie Stevens and late singer Eddie Fisher. In Malibu, she lived next door to her half-siblings, Carrie and Todd Fisher, and their mother Debbie Reynolds, whom she called "Momma Deb."

"In my memoir, I describe my family as a fishbowl," Fisher recently told Closer Weekly. "We have been watched, scrutinized and judged. But as they watched us swim around, we have perfected our stroke! We were like carny people."

But life wasn’t as glamorous as it appeared. The 54-year-old recalled how her mother, 83, worked tirelessly to support her family.

JOELY FISHER SAYS DAD EDDIE FISHER WROTE APOLOGY LETTER FOR EXPOSING HER TO DRUG ABUSE: ‘HE WANTED TO BE LOVED’

American singer and actor Eddie Fisher (1928 - 2010) with his fiancée, American actress, singer and producer Connie Stevens, sitting in the back of a car after announcing their engagement circa 1967. (Harry Benson/Daily Express/Hulton Archive/Getty Images)

"We would go on the road with her," Fisher explained. "It was a survival thing. It wasn’t all first-class and limos. She was a single mother working to support the family… I knew that this was my life from the very start."

"I remember when I was young and I had my first screen test," Fisher continued. "I didn’t get the role, and I was just hysterical. And she was like, ‘It’s a job. It wasn’t your role. It was somebody else’s role. And it doesn’t validate who you are as a person.’ She reiterated that over the years – what an incredible human being I am now and how proud she is of me and what a great mother I am. And so I guess I took that in."

But Fisher admitted her relationship with the patriarch was different. Eddie married Stevens in 1967, a few years after he and Elizabeth Taylor called it quits in 1964. The union ended in 1969.

"I didn’t grow up with my dad," she explained. "He never really acted like a dad. But he was amazing and we did develop a real friendship after I turned 16 and then later in life. I adored him and forgave him. He is gone 11 years."

"When my father passed away… my mother said, ‘Oh, we have to memorialize Eddie,’ because she still calls him ‘delicious,’ even after all these years," Fisher told the outlet. "So we had a little party with bagels and lox for my little Jewish dad. My sisters and I got up and spoke. By the end, we all had included in our speech that we were his favorite! The reason why we all said that is because, at one point in our life, he made us feel that way. He didn’t know really how to be a father, but he did adore us all, and he did honor us all in that way."

In her memoir "Growing Up Fisher," the star chronicled how she witnessed her father’s addictions as a toddler. Fisher admitted that as a child, she didn’t realize what she was witnessing and Eddie didn’t purposely expose his personal struggles in front of his daughter. Eddie later expressed regret for what Fisher saw growing up. According to People magazine, Eddie struggled with drug addiction for almost four decades before finally getting clean with the support of his fifth wife Betty Lin.

"I think it’s wrong on so many levels to be exposed to all of that as a child," Fisher told Fox News back in 2018. "But everybody has their flaws and I think that his were just giant ones... I found this letter where he was asking in a fatherly way as much as he could for my forgiveness for what I was witnessing, so I know that I did see it."

Fisher said she wanted her father to be remembered for more than the public scandals and high-profile romances.

"He was bleak, he was charming and had to have been all of those things, or he wouldn’t have gotten the most gorgeous creatures to marry him on this planet," she explained. "He grew up singing for his supper, quite literally. He started singing on the radio at 12, 13 years old. Supported his family and realized when he opened his mouth to sing, people loved him… Maybe he needed love, and he got it from being a performer and people adored him."

"I think there’s a little something that’s dangerous in that," she continued. "And then you don’t think that anything else that you have to give is enough… He was like anybody else. He wanted to be loved, and I think that there was something vulnerable about that, that I got to know. Maybe that’s what people thought, that he was a womanizer and a gambler and all those things. Maybe he very well was all those things. But he was also just a man."