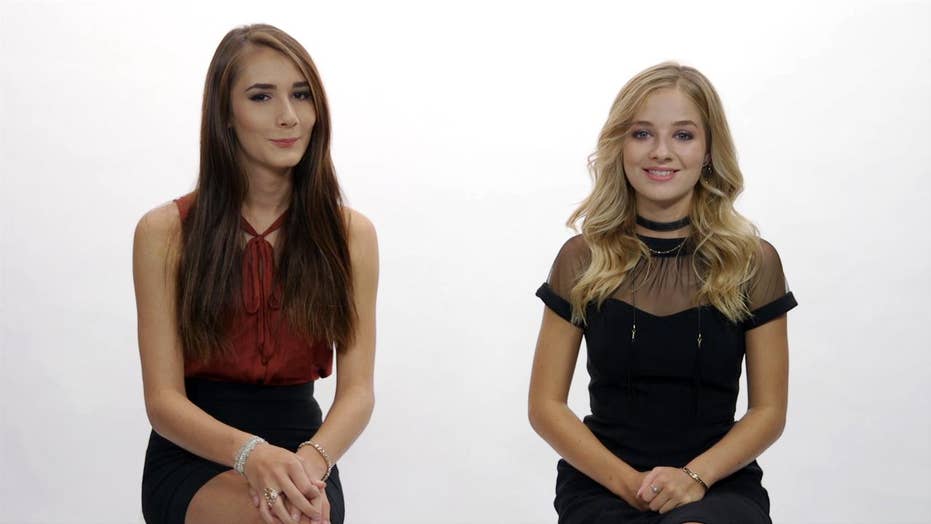 NEW YORK – Juliet and Jackie Evancho settle into their chairs at the Fox News studios in New York City. The sisters from Pittsburgh fuss over each other's outfits, making sure their hair and make up is perfect before the cameras start rolling.

The duo playfully argue over who gets to say their name first as they prepare for their intro. When one messes up, the other pokes fun and it takes some time for the giggles to subside.

Juliet, 19, Jackie, 17 seem like ordinary teenage sisters with a healthy balance of competition and sisterly love -- except Jackie is a famous singer and Juliet recently transitioned from a male to a female.

"I think a lot of what people think I am, or my family is, is kind of up in the air and no one really knows what we support, what we do," Jackie Evancho told Fox News.

The "Two Hearts" singer was thrust into the spotlight at age 10 when she was a runner-up on Season 5 of "America's Got Talent." She somewhat accidentally became a controversial artist when she agreed to perform the national anthem at President Trump's inauguration.

Around the same time, her sister Juliet revealed she was transgender, putting a spotlight on the entire Evancho family.

"For Jackie, it was never about supporting one person," Juliet Evancho told us of her younger sister's inauguration performance. "It was more so just kind of taking the opportunity."

Jackie agreed, explaining, "It was more about the honor and other than that, my support goes completely to my family, to my sister. If I can help her in anyway, I'm going to."

Jackie, Juliet and the rest of their family had the chance to let the world peek into their lives on the TLC special "Growing Up Evancho."

The girls said they hope the special will lead their "haters [to] stop hating" and to shed light on what being transgender means.

"Transgender is when your brain kind of doesn't match your body," Juliet explained. "For me, I was born a guy. I was born Jacob Michael Evancho and I transitioned into Juliet Michelle Evancho and that was because ever since I was little, I knew that I was a girl and I didn't feel right as a boy."

While the Evancho's special focused on transgender issues and Juliet's coming out story, the sisters also hope viewers walked away with a better understanding of who their family really is.

"We're staying united through this because in the end we really don't care what people think about us," Jackie shared. "And it's been this way since before we were even in the spotlight. We just don't care as long as we are a family are happy."