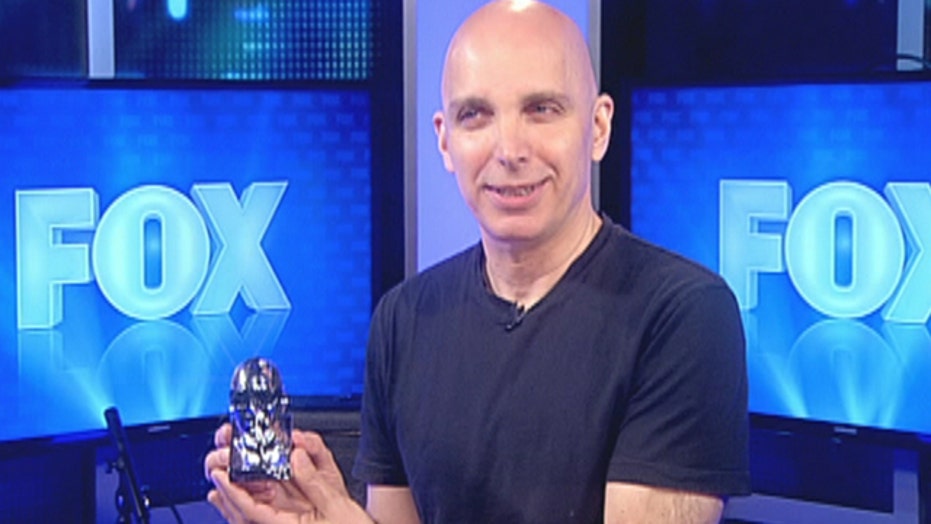 Rock virtuoso Joe Satriani talks rocking out, playing with Mick Jagger, and condensing his life's work onto a thumb drive

NEW YORK – Guitar giant Joe Satriani came by the FOX411 studios to celebrate the release of his career-spanning box set The Complete Studio Recordings by playing his signature barnburning track, “Satch Boogie.” After the smoke cleared, Satch sat down with FOX411 to show us the super-cool limited-edition Chrome Dome USB version of the box as well as talk about his career and his new autobiography, playing live with Mick Jagger, and giving advice for how to avoid projectile drums.

Joe Satriani: Not bad at all! (laughs) Well, it was a little daunting at first. Just listening to all of that music is hard. Once I put a record to bed, I really don’t want to revisit it. I relate more to the live stuff, because I’m playing most of the catalog onstage in front of audiences 99 percent of my life. To go back to the recorded versions is kind of odd. I hear all of the missed opportunities. (chuckles)

My co-producer John Cuniberti and I approached all of these records thinking like audiophiles by keeping the dynamic range huge and having long fadeouts. During the loudness wars of the ’90s, the dynamic range shrunk down and everything got crunched. We remastered everything to a consistent level where everyone can hear the music the way we heard it when we were recording it. It really sounds glorious in full fidelity.

FOX411: You killed it on “Satch Boogie” here in the studio.

Satriani: Thanks. When we went to mix “Satch Boogie” at Hyde Street Studios [in San Francisco in 1987], we got to the end with all these screaming guitar noises trailing off, and we were faced with a problem since the drum machine was leaking through the guitar pickups. So we had to come up with a hyper Motown fade — you know, where it’s really fast at the very end. But it worked out. We kept that particular take, and then we moved on.

FOX411: And now you get to play it just about every night.

Satriani: Yeah. I love it because I get to work on it some more. Even today, I did something to improve it just a little bit. I have to prove to myself that I can play it as good as yesterday. I mean, I came to the studio today thinking the same thing: “Can I play ‘Satch Boogie’ as good as I did yesterday?” I’m always on my toes to bring as much as I’ve worked on to my fingertips to make sure I can get it to happen for the audience.

FOX411: As a guitar teacher, you taught a number of people who grew up to be very well-known guitar players, like Steve Vai, Kirk Hammett of Metallica, and David Bryson of Counting Crows. How could you tell when someone had real potential?

Satriani: That’s the exciting thing about teaching. You need to size up students as quickly as possible to find out what their attributes are and let them celebrate what you think may be their natural talent. Kirk was a great student. He had great taste in guitar players, so we would always be working on stuff that was fun. And he had an appetite for instruction, which was great for me. I could lean on him really hard, and he seemed to enjoy the abuse. (both laugh)

FOX411: You’ve shared the stage with a number of great artists. Let's pull a name out of the air here — Mick Jagger. You played with him on his first solo tour in 1988. What was it like getting that call?

Satriani: That was really crazy. It’s still unbelievable when you think about it. If you go back a few months before I got the gig, my [1987] record Surfing With the Alien was done, and then I get a call: “Mick Jagger is looking for a guitar player. Would you like to do it?” Of course I’m laughing, because I would never get it. I don’t look the part; I’m not part of that circle. But I figure, if you can get me in a room with him, that’ll be worth it just for the fun of it. As it turned out, everything really did go great during the audition, and I fit right in with the band because it was a very diverse group of musicians. We had a great time.

FOX411: Did Mick give you any advice that still sticks with you today?

Satriani: Anytime we’d play some place really big, he’d say, half-joking, “You know, you’re going to do a lot more waving than actual playing.” (laughs) He was always trying to get us to communicate with the audience. That was his strength, besides his incredible musicianship and his energy as a performer. He just instinctively knew how to communicate to any-size audience, whether it was a room like this studio, a medium-size club, an arena, or the Tokyo Dome. He just knew how to bring everybody in. It was truly remarkable. I have never worked with anyone who worked so hard during a show. He just really loved performing. It was affirming. I felt really good about being myself onstage. He really helped me out quite a bit.

FOX411: Have you had a chance to speak with Mick recently at all?

Satriani: No. He’s got a lot of good people around him. The band is really tight right now, which is good, and they’ll help him through this rough time.

FOX411: "Strange Beautiful Music: A Musical Memoir" is the name of your autobiography that comes out in May. Give us one nugget from the book where you talk about becoming grounded as an artist.

Satriani: There was one day in 1995 when I was in the studio working on the eponymous Joe Satriani record, and I was caught between being the “old Joe” and the “new Joe.” The producer, Glyn Johns, took me aside and said, “You know, it’s not your job to decide what people should like. It’s your job to go out and play your guitar.” It was sort of a slap in the face, but that’s what it’s all about. You just keep moving forward. The artist’s life is simply to make art and tell the truth with what you do. In my case, it’s to do that through the music I play with my guitar, and let the people decide whether they like it or not.

FOX411: Besides being a solo artist, you’re also in Chickenfoot, a great band you have with Sammy Hagar, Michael Anthony, and Chad Smith. Any “only on the road with Sammy and the boys” stories you could share?

Satriani: None that I should. (laughs) That’s a crazy bunch of people right there. Well, a funny thing happened at the end of our first tour in the U.K. We came to the end of a show where Chad decided to destroy his drums. He went completely crazy. The reason why it worked at that exact moment is because Mike and I, who were at complete opposite ends of the stage, kept playing, and we allowed him to self-destruct. We were doing a total hyper-Hendrix version of “The Star-Spangled Banner.” In his frenzy, Chad wound up throwing the floor tom-tom right at Sam’s head just as he’s going across the stage. And I remember thinking, “Oh, we’ve just lost our singer. It’ll make a great headline: ‘Singer Killed by Drummer Onstage During Last Song.’” (both laugh) Luckily, Sam survived, and no fight ensued. It was a great moment. But it illustrated the fact that having the balance between the guys who seek mayhem and the guys who seek to make a musical statement is a real good combination. And yes, sometimes we all take turns being “The Disruptor.”

Satriani: Well, my lofty aspiration would be to be an astrophysicist or an astronaut. But no, I’d probably be your local baker at the end of the block. (laughs) I’d try to avoid the dirty jobs and the dangerous jobs. But when you think about it, being an astronaut is a dangerous job, isn’t it?