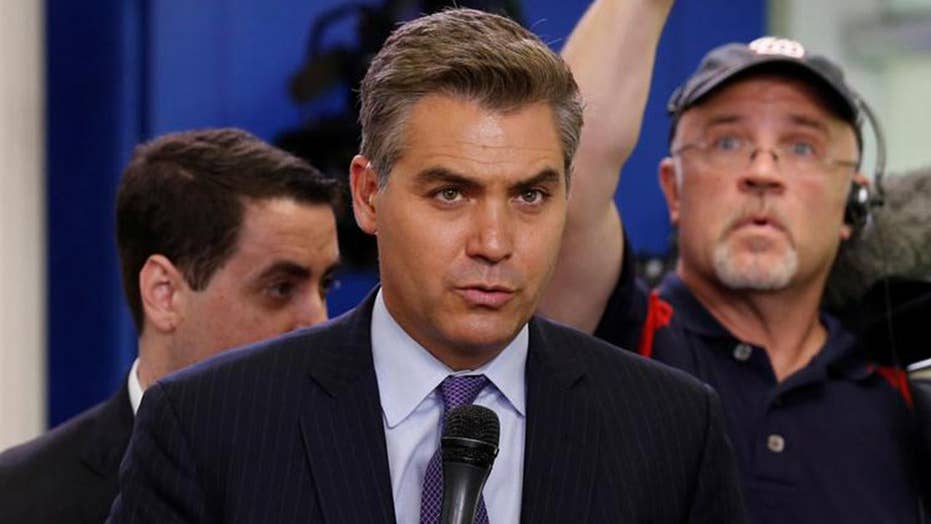 The network argues stripping away Acosta's pass violates the constitutional right to freedom of the press; the White House promises a fight and accuses Acosta of behaving unprofessionally.

Fox News announced on Wednesday that it supports CNN’s efforts to restore Jim Acosta’s White House credential after the network filed a lawsuit against the Trump administration.

“Fox News supports CNN in its legal effort to regain its White House reporter’s press credential. We intend to file an amicus brief with the U.S. District Court. Secret Service passes for working White House journalists should never be weaponized. While we don’t condone the growing antagonistic tone by both the president and the press at recent media avails, we do support a free press, access and open exchanges for the American people,” Fox News President Jay Wallace said in a statement.

CNN filed the federal lawsuit against the Trump administration on Tuesday demanding that the White House restore the press credential of star reporter Jim Acosta. The administration suspended Acosta's "hard pass," which provided expedited access to the White House grounds, after he broke protocol by refusing to surrender his microphone during a press conference last week.

Press Secretary Sarah Sanders issued a scathing statement, calling the move “more grandstanding from CNN” and pointing out that the network has other reporters who are still allowed to enter the White House.

"This is just more grandstanding from CNN, and we will vigorously defend against this lawsuit,” Sanders said. “CNN, who has nearly 50 additional hard pass holders, and Mr. Acosta is no more or less special than any other media outlet or reporter with respect to the First Amendment. After Mr. Acosta asked the President two questions — each of which the President answered — he physically refused to surrender a White House microphone to an intern, so that other reporters might ask their questions. This was not the first time this reporter has inappropriately refused to yield to other reporters.”

Acosta's press pass to access the White House was suspended "until further notice" after he engaged in the contentious back-and-forth last week over the migrant caravan working its way up through Mexico. Trump characterizes the caravan as "an invasion," a term to which Acosta objected.

“Honestly, I think you should let me run the country and you run CNN,” the president said.

Acosta attempted to ask Trump another question before a female White House aide walked over to him. The CNN reporter continued to try to talk as the aide was seen trying to take the microphone from his hand. She grabbed the microphone but Acosta wouldn't give it up and there was brief contact between the two. Later in the day, Acosta’s credential was revoked.

The White House Correspondents’ Association – of which Fox News is a member – issued a statement in support of CNN's decision to take legal action.

“We continue to urge the administration to reverse course and fully reinstate CNN’s correspondent,” WHCA President Olivier Knox said. “The President of the United States should not be in the business of arbitrarily picking the men and women who cover him.”

However, several prominent media members – such as Pulitzer Prize-winning Watergate journalist Bob Woodward – have criticized CNN over the lawsuit.

Acosta has emerged as a hero of the #Resistance after making a habit of shouting and interrupting when Trump and members of his administration are available to the media. Acosta has also gotten into combative arguments with other members of the administration, including former Press Secretary Sean Spicer, Management and Budget Director Mick Mulvaney and Senior Policy Adviser Stephen Miller.