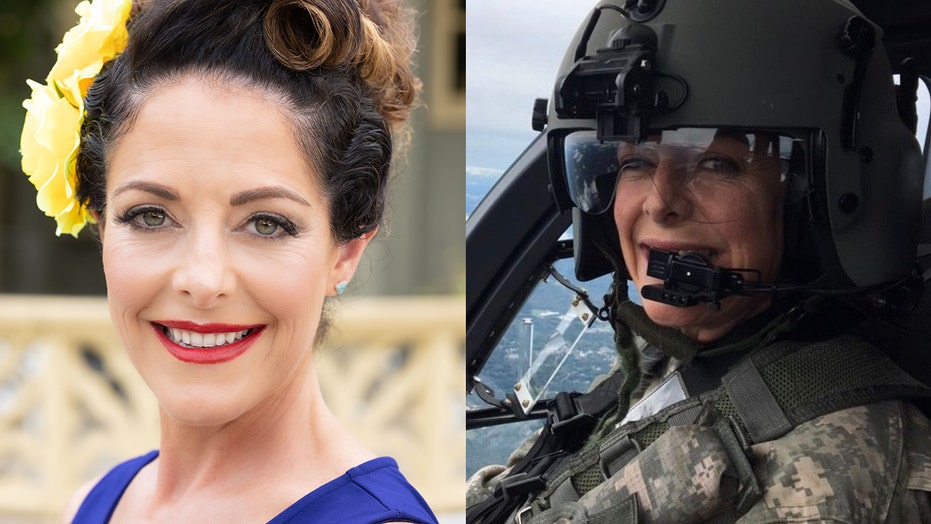 Jana Tobias was eager to suit up in a completely different way.

The veteran, who served in the Army as a Black Hawk pilot, is one of 12 women who swapped their uniforms and combat boots for ‘40s style dresses and high heels, for the 16th annual Pin-Ups for Vets 2022 calendar. The award-winning nonprofit, founded in 2006 by California resident Gina Elise, raises funding to support hospitalized and deployed troops.

"I try to follow as many veteran organizations as possible," Tobias told Fox News. "I came across Pin-Ups for Vets on Facebook and I was just intrigued. I’ve always loved the 1940s, not because of the clothes, but really the nose art. I’m in aviation, so that has always fascinated me. It was also a time when our country was going through hardship and war. And yet, we as Americans did whatever was possible to motivate and uplift our troops, so they can keep going. I felt like I could contribute."

The 44-year-old’s journey is one made fit for the silver screen. As a child, she was enamored with G.I. Joe and the 1984 action film "Red Dawn," about how a group of teenagers band together to defend their country from invading Soviet forces.

"I grew up with four brothers," she chuckled. "My father always treated me like one of the boys. He didn’t treat me special because I was a girl. He taught me everything, including fishing, camping, hiking – whatever else my brothers were doing. We also wrestled. I felt like I could do anything that my brothers could do. My father also served at the National Guard so service was essential in my family."

According to the Massachusetts resident, it was in college when she saw a flyer for the ROTC at her dorm cafeteria.

Jana Tobias said that growing up, she was enamored with G.I. Joe. (Pin-Ups for Vets)

"It was something I’ve always wanted to do," said Tobias. "I wanted to help people, save people. And I felt it would be very cool."

The choice forever changed her life.

Tobias joined the Santa Barbara ROTC at the University of California during her freshman year in 1995. She was commissioned as a Second Lieutenant through the ROTC when she graduated in June 1999.

Tobias said one of her most memorable experiences was being involved with the disaster relief and rescue operations during Hurricane Katrina in 2005. She described landing on overpasses, streets, stadiums and rooftops to help those stranded by rising waters.

"We all just came together from all different services to help civilians," she recalled. "We got people from dark buildings that had no electricity. It was really hard to hold it together at times because you’re helping people who have lost everything. I remember one woman who was diabetic and I had to send my crew down a dark stairwell with the waters rising. I remember one family was waving at us from a rooftop in need of help. We were so grateful to be of aid, but it was just a humbling experience for all of us. Mother nature can take away everything in a heartbeat."

As a commander and helicopter pilot, Jana Tobias served in disaster relief during Hurricane Katrina. (Pin-Ups for Vets)

"But I love flying helicopters," she continued. "And it felt good to stand united and help others."

Over the years, Tobias said she followed several veteran organizations on social media. And along the way, she discovered Pin-Ups for Vets.

"The style was intriguing," she said. "But also, I was just really drawn to the organization’s mission and what they were trying to accomplish by supporting our veterans. It felt like the perfect way for me to serve again. I reached out because I have done my own little pinup photos for my husband in these cool outfits and thought, ‘I could do this.'"

'40S PINUP BETTY GRABLE WAS PROUD OF 'BRINGING A LITTLE HAPPINESS TO OUR SOLDIERS' DURING WWII, DAUGHTER SAYS

Since its launch, Pin-Ups for Vets has donated over $80,000 to help hospitals purchase new rehabilitation equipment and to provide financial assistance for veterans’ health care program expansion across the country. During the pandemic, Pin-Ups for Vets has been shipping out care packages enclosed with gifts of appreciation to hospitalized veterans. It continues to mail morale-boosting care packages to deployed U.S. troops around the globe.

"I’m not a model, so this was outside my comfort zone," said Tobias. "But my husband was there and making me laugh. It was a lot of fun. I met so many amazing women with inspirational stories from their time in the military. And when I saw the photos, I just couldn’t believe it was me. Gina has this eye and I felt so beautiful. I still can’t believe it’s me."

And the cause hit close to home. Tobias said that like many veterans, she faced personal struggles.

"My biggest struggle was knowing who I was and how I fit in," she admitted. "I was an officer, I was a leader. I was in charge of platoons and companies. Those were all skills I learned to develop… Some people might think veterans just follow commands because that’s the perception of the military. You’re just a soldier. You don’t ask questions. But you have your integrity, your moral compass. We’re not just robots. We have goals and dreams like anyone else."

Gina Elise salutes Philip Justice 77, who was drafted into the Army in 1957, during her visit to the Denver VA Medical Center on Dec. 14, 2011. (Joe Amon/The Denver Post via Getty Images)

"Even a simple thank-you makes me feel appreciative," she continued. "When I was younger, I just couldn’t understand how our vets could be treated so poorly after they saw hardships. You want to feel that you matter from the people you love. You want to feel appreciated and not alone. When a soldier feels appreciated, they can do their job so much better. The feeling of being alone and not understood is so detrimental to someone’s mental health, no matter what you do. But especially serving, the things we are required to do are difficult. So the more support that we have, the stronger our soldiers can be… and horrible tragedies will be less likely to happen."

Looking back at her experience with Pin-Ups for Vets, Tobias said she’s a proud American and is looking forward to what our country can accomplish in the New Year.

"I am proud of our resilience," she said. "I am proud that we can live in a place where we aren’t persecuted daily. I don’t know if many people realize that. You don’t have to look over your shoulder constantly. We have our freedoms. I’m happy where we are as a nation because it’s far better than it could be. We always fight and we never give up. We’re not afraid to tackle hard issues. And, we’ve maintained a level of security and freedom that is unparalleled."