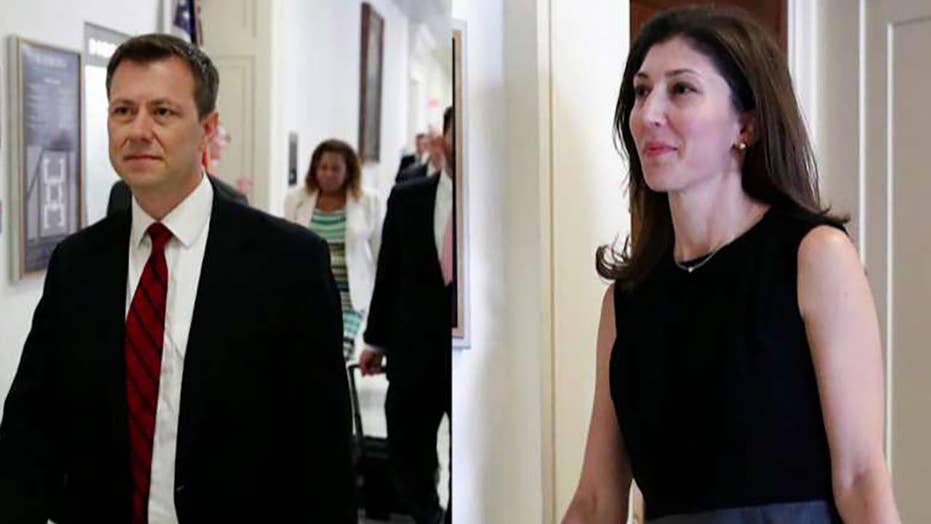 Do anti-Trump text messages between Peter Strzok and Lisa Page rise to the level of treason?

"FBI Lovebirds" was the first-ever play to be held at the annual Conservative Political Action Conference (CPAC) on Thursday.

The play was a dramatic reading of the controversial text messages made between former FBI agent Peter Strzok and former FBI lawyer Lisa Page, who were under the subject of intense scrutiny during the Mueller investigation over their expressed animus towards President Trump during the 2016 election.

The text messages, read aloud by actors Dean Cain and Kristy Swanson who played Strzok and Page respectively, sparked plenty of laughs and rounds of applause from the audience.

Cain, a frequent Fox News guest, is best known for playing Clark Kent/Superman in the TV series "Lois & Clark: The New Adventures of Superman." Swanson is best known for her portrayal of Buffy Summers in the movie "Buffy the Vampire Slayer." Swanson also starred in "Pretty in Pink," "Ferris Bueller’s Day Off" and "Big Daddy."

The roughly 50-minute performance, which was shortened from the original play for CPAC, was followed by a question-and-answer session with the actors as well as conservative filmmaker Phelim McAleer, who wrote play, and his wife, Anne McAleer, a producer.

Cain revealed that the dress Swanson wore to the CPAC performance matched what Page wore to her congressional testimony.

Strzok's message to Page invoking "insurance policy," which fueled speculation among the president's supporters that members in the Department of Justice were attempting to oust Trump. The FBI agent, who was originally part of Special Counsel Robert Mueller's team investigating Russia's involvement in the 2016 election was removed when the text messages emerged.

Appearing on "The Rachel Maddow Show" in December, Page was asked about the "insurance policy" text.

"It's an analogy," Page began. "First of all, it's not my text, so I'm sort of interpreting what I believed he meant back three years ago, but we're using an analogy. We're talking about whether or not we should take certain investigative steps or not based on the likelihood that he's going to be president or not."

She continued, "You have to keep in mind ... if President Trump doesn't become president, the national-security risk, if there is somebody in his campaign associated with Russia, plummets. You're not so worried about what Russia's doing vis-à-vis a member of his campaign if he's not president because you're not going to have access to classified information, you're not going to have access to sources and methods in our national-security apparatus. So, the 'insurance policy' was an analogy. It's like an insurance policy when you're 40. You don't expect to die when you're 40, yet you still have an insurance policy."