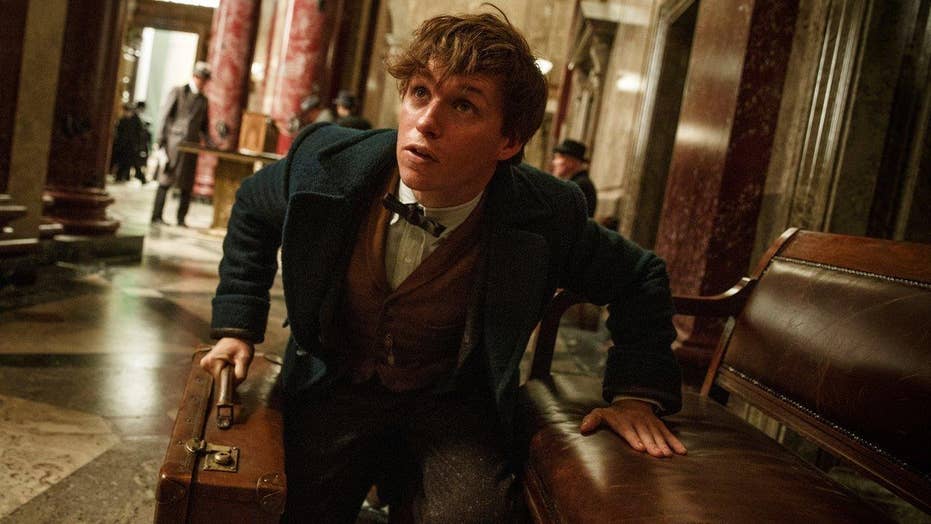 Fox411 Movies: Rotten Tomatoes Editor-in-Chief Matt Atchity on with the critics ratings on this weekend's big movies: 'Fantastic Beasts and Where to Find Them,' 'The Edge of Seventeen,' 'Bleed for This' and 'Billy Lynn's Long Halftime Walk'

LOS ANGELES – Harry Potter spinoff "Fantastic Beasts and Where to Find Them" cast a spell over audiences in its debut, summoning $75 million according to studio estimates Sunday and unseating "Doctor Strange" from the top spot.

Starring Eddie Redmayne and directed by Harry Potter alum David Yates, "Fantastic Beasts," a Warner Bros. release, cost around $180 million to produce, and is meant to kick off a five film franchise based on author and screenwriter J.K. Rowling's creation.

It's been scoring well with critics and audiences, who gave the film an A CinemaScore. According to the studio, 55 percent of attendees were female and 65 percent were over the age of 25.

"It's a real crowd pleaser," said Jeff Goldstein, Warner Bros.' president of domestic distribution. He noted that the film performed especially well in small to medium-sized towns across North America, and not just in the major markets.

While "Fantastic Beasts" doesn't quite compare to the opening weekends of the "Harry Potter" films, which averaged over $91 million in their debuts, Goldstein is hopeful for how it will play out over the Thanksgiving holiday when kids are out of school.

Indeed, it was a strong weekend for all-ages films overall in the lead-up to the holiday, with "Doctor Strange" placing second with $17.7 million and "Trolls" close behind in third with $17.5 million. The sci-fi mindbender "Arrival" took fourth with $11.8 million, while the themed comedy "Almost Christmas" rounded out the top five with $7 million.

The success of the top films this weekend didn't leave much room for other new wide releases to find their footing this weekend, however.

Ang Lee's ambitious wartime drama "Billy Lynn's Long Halftime Walk" tanked in its expansion from four to 1,176 theaters with a mere $930,000. The film cost a reported $40 million to produce and has netted only $1.1 million total, hindered by negative reviews of its revolutionary high frame rate. Last year, Sony had a similarly inauspicious start for "The Walk," which was also touted as a must-see technological achievement.

Other more modestly budgeted films also struggled, including the R-rated high school comedy "The Edge of Seventeen," which earned $4.8 million, and the fact-based boxing drama "Bleed for This," which took in $2.4 million.

While boxing pics outside of the "Rocky" films are generally a gamble, despite their abundance in the marketplace, "The Edge of Seventeen," was expected to do a bit better. The audience for the well-reviewed film starring Hailee Steinfeld from first-time director Kelly Fremon Craig was 70 percent female and 75 percent between the ages of 17-34. The studio is hoping good word of mouth will drive further returns.

In limited release, the drama "Manchester by the Sea," expected to be a big awards player, got off to a decent start with $241,230 from four theaters. It will be expanding in the coming weeks.

"I think there are almost too many options right now," noted Dergarabedian, who expects the five-day Thanksgiving frame to be a record-breaker thanks to new openers like Disney's "Moana" and audiences looking to catch up on things they've missed.

1."Fantastic Beasts and Where to Find Them," $75 million.