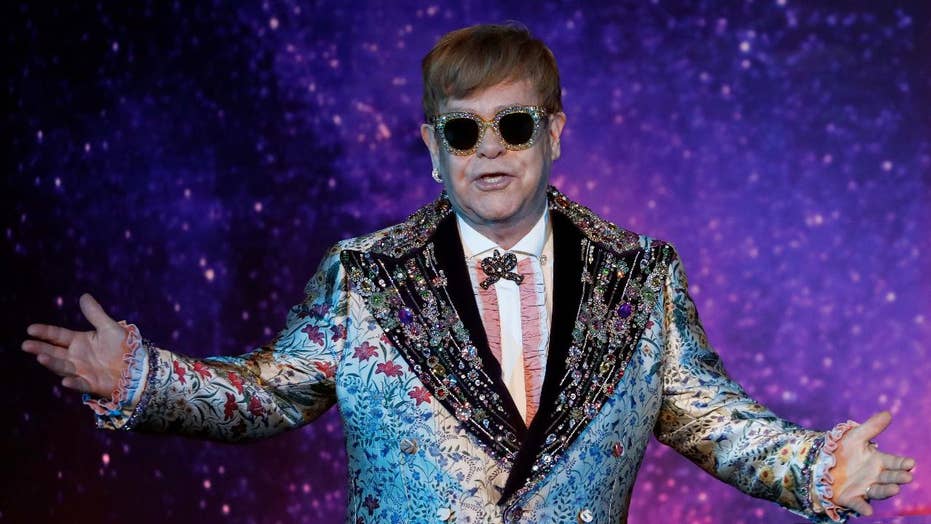 Sir Elton John announced he will launch his farewell tour, entitled the 'Farewell Yellow Brick Road' tour, in September. It will include over 300 shows and will span three years.

From tripping naked on drug-fuelled binges to rowing with Princess Diana and sharing a joke with the Queen, Sir Elton John does not hold back in his new autobiography, "Me."

Coming hot on the heels of his musical biopic "Rocketman," the brutally honest memoir delves into every nook and cranny of the 72-year-old star’s extraordinary life.

From the sordid to the embarrassing, the funny to the heart-rending, it is a candid look at a man whose career has spanned 50 years.

Kate Jackson picks out some of the best bits.

On cocaine, booze and getting clean

For 16 years, cocaine gave Elton the false confidence he needed to blend into an “elite little clique” he had never felt part of as “nerdy” Reginald Dwight, from Pinner, Middx.

But along with his heavy drinking, it also fuelled some extreme and violent behavior, including the time he stripped naked and punched then-manager John Reid on the set of the video for "I’m Still Standing."

It was while high on cocaine that the rocker hijacked a Rolling Stones gig after joining them on stage and mistook Bob Dylan for a gardener and offered him an outfit so he could change out of his scruffy clothes.

He writes: “My appetite for the stuff was unbelievable – enough to attract comment in the circles I was moving in.

“Given that I was a rock star spending a lot of time in Seventies Los Angeles, this was a not-inconsiderable feat.”

In 1990, then-boyfriend Hugh Williams entered rehab, plunging Elton into a fortnight-long cocaine and whiskey binge. He tells how he isolated himself, did not wash, barely ate and, when he did, would vomit afterward.

It was at this point that he realized he would either have a heart attack or an overdose if he carried on.

So on July 29, 1990, he checked into rehab in Chicago at the age of 43. It was said to be the first time in his pampered life he had learned how to operate a washing machine.

Elton has now been clean for 29 years.

On his famous friends

Over a 50-year career, Elton has rubbed shoulders with pretty much every celebrity going.

He once gave John Lennon a rather rude cuckoo clock – where the bird had a wooden penis that popped in and out.

He writes how actress Liz Taylor would charm him into giving her his expensive jewelry.

And he was once gobsmacked when the Queen gave him a conspiratorial wink before jokingly slapping her nephew Viscount Linley around the face.

Rod Stewart, who adopted the alter ego of “Phyllis” to Elton’s “Beryl” in their friendship, sent him a domed hair dryer, like the sort used by pensioners in salons, when news of Elton’s hair loss hit the headlines.

Their banter and friendly rivalry led to Elton arranging for a blimp advertising one of Rod’s gigs to be shot down – and he suspects it was Rod who later stole one of his own promotional banners.

Elton John said his farewell tour was the end of touring for him. (Reuters)

But one star he does not have much affection for is Tina Turner, after she criticized his clothes, hair and even the color of his piano ahead of a planned joint tour in 1997.

The straw that broke the camel’s back was a heated argument over her song "Proud Mary" when Elton told her to “stick her f---ing song up her ar-e”.

Not surprisingly, the tour was cancelled, although the pair did later make up.

On being a dad

Elton and husband David are parents to Zachary, 8, and Elijah, 6, who were both conceived using the same donor eggs and surrogate.

But fatherhood was not something Elton had yearned for, especially considering his own troubled childhood.

In the book, he writes: “If you’d tried telling the Elton John of the Seventies or Eighties that he could find more fulfillment on a deep and profound level in changing a nappy than in writing a song or playing a gig, you’d probably have had to exit the room at high speed immediately afterwards, with crockery flying past your ears.”

So it was a surprise when he found parenting such a pleasure.

He writes: “I even found the toddler tantrums weirdly charming.

“You think you’re being difficult, my little sausage? Have I ever told you about the time I drank eight vodka martinis, took all my clothes off in front of a film crew and then broke my manager’s nose?”

And it is the simple pleasures, such as going to see a family movie or taking them to watch his beloved Watford FC, he enjoys the most.

So much so he is winding down from music to spend more time being a dad. It was when David presented him with their sons’ school schedule, charting their lives, that he realized he could not be an international rock star as well as the kind of dad he wanted to be.

Having taken pride in still performing 120 gigs a year, he planned for retiring from the stage.

He is currently in the middle of a 300-date Farewell "Yellow Brick Road" tour, ending in 2021.

He said earlier this year: “By the time I finish I’ll be at least 75. That will be a chance to reassess what I want to do. I just owe it to those children to be there for them.”

He also writes in the book about the time he was diagnosed with cancer in 2017 and needed surgery to remove his prostate.

When a subsequent infection left him 24 hours away from death, he prayed to live to see his kids again. It was as he was recovering that he realized he had to stop touring.

Elton John discusses fatherhood in his autobiography "Me." (ich Polk/Getty Images for IMDb)

He writes: “Music was the most wonderful thing, but it still didn’t sound as good as Zachary chattering about what had happened at Cubs or football practice.”

On his friend Princess Diana

Elton first became friends with Princess Diana in 1981 at an awkward 21st birthday party for Prince Andrew, and he recalls how he found her company and thirst for gossip irresistible.

He tells a fascinating story about a party years later, after she had separated from Prince Charles, during which Hollywood A-listers Sylvester Stallone and Richard Gere competed for her attention.

Elton’s husband David found the actors “squaring up to each other” and preparing to trade blows.

Action-man Sly then stormed off, saying: “I never would have come if I’d known Prince f---in’ Charming was gonna be here.”

Elton John discusses his friendship with Princess Diana and her sons Prince William and Harry’s happiness after falling in love. (AP)

Addressing his fall-out with Diana, Elton reveals it was over a photography book featuring nearly naked men, by fashion designer Gianni Versace – the proceeds of which were going to Elton’s Aids Foundation.

Diana had agreed to write the foreword but he says she pulled out at the last minute.

The pair made up in July 1997 after Versace was shot and killed. It was just seven weeks before Diana herself lost her life.

Elton famously played a special tribute of "Candle In The Wind" at her funeral but admits he has only listened to that version once since.

He also says he felt uncomfortable that the single, which is the biggest-selling UK song of all time, stayed at No. 1 for five weeks as it meant footage of Diana’s funeral was repeated on "Top Of The Pops."

The singer’s huge hits, such as "Tiny Dancer" and "Your Song," might be about love but Elton’s experience with it has been as turbulent as the rest of his life.

He admits he would chase straight men as well as fall “hopelessly in love” with someone he spotted in a gay bar, convinced he was The One.

After an adoption effort fell through, Elton John and David Furnish turned to a gestational carrier in 2010 to give birth to their son Zachary. (Reuters)

He lavished his love interests, including ex Hugh Williams, with expensive gifts, before tiring of them after a few months – and getting someone else to ditch them.

He writes: “It was absolutely dreadful behavior. I’d have one leaving at the airport at the same time as the new one was flying in.”

He even attributes the time he overdosed on Valium pills as probably due to “some catastrophic love affair gone wrong”.

In 1993, he met film-maker David Furnish. The pair entered a civil partnership on December 21, 2005 – the day the UK’s Civil Partnership Act came into effect. That partnership has now been converted into a marriage.

On his mother Sheila

When he was 13, Elton’s parents split up. Many of their arguments had been about his upbringing, so Elton blamed himself for their toxic relationship.

His own relationship with his mum Sheila was also turbulent. He describes how she often delivered hidings and even toilet-trained him by beating him with a wire brush.

Yet he says she could also be fun and was supportive of his career and of him when he came out as gay.

But when he married David, things took a turn for the worse.

He recalls how she turned up to their civil partnership at the Guildhall in Windsor, Berks, “in character as a raving sociopath.”

She proceeded to moan, snap, storm off and complain about everything to everyone she met.

"X-Factor" judge Sharon Osbourne, a guest at the bash, told Elton: “I want to kill her.”

He also describes having to tiptoe around Sheila, never knowing what would enrage her next.

Towards the end of her life, they had a bitter falling-out, which lasted seven years.

According to an interview with Sheila in 2015, it was sparked when she said to him: “You think more of that f---ing thing you married than your own mother.”

Sheila then auctioned off many of the gifts he had given her – and even hired "The Ultimate Elton Tribute Band" for her 90th birthday.