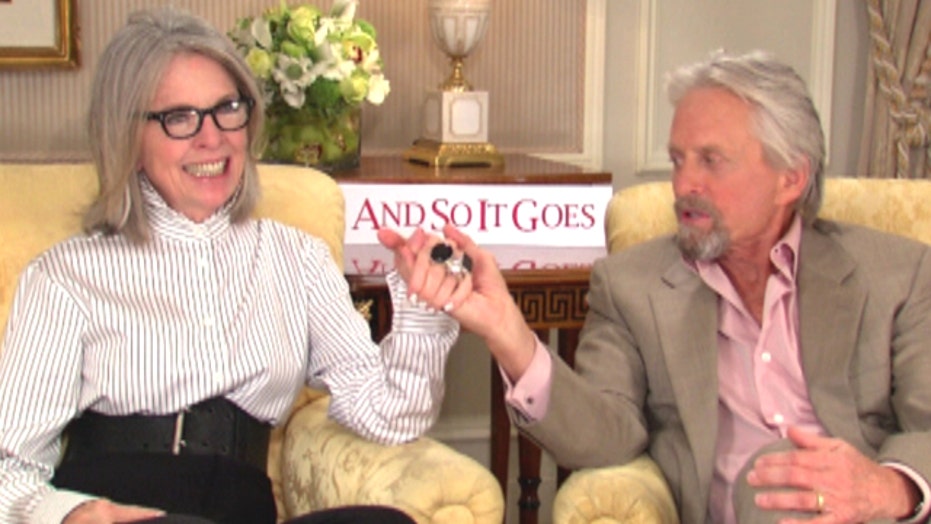 Stars chat about 'And So It Goes'

Hollywood icons Diane Keaton and Michael Douglas team up for the new romantic comedy “And So It Goes” about an unlikely pair finding love at a later point in life. The two had never worked together before this film, but it was clear from all the fun they were having during our FOX411 interview, they have quite a bond now.

FOX411: This bond that you now have, you never worked together before, was it just instant as soon as you got onto set?
Michael Douglas: In another life, in another life…
Diane Keaton: What other life are you talking about?
Douglas: I guess because we felt like we knew each other. At least that’s what I did. I felt like I knew you because I've seen so many movies (Keaton: I didn't feel like I knew you) well that's because it's different, because you're kind of funny, you like laughs, and did comedy so that makes you kind of relaxed and easy and acceptable.  I'm a kind of a dark squirrely guy, you know, like unpredictable so you don’t have that benefit. I had that benefit.  You're just warm and embracing and I feel like I know you.

FOX411: The film is about finding love in a later point in life. How do you feel a love story differs?
Keaton: Actually, I don't think it differs. I think whenever you fall in love it's a brand new experience and you can’t believe that you're in that situation again or that you feel that way. So I think it's always new and that's what's so great about love, falling in love “love,” not the kind of love I feel for Michael which is a love of friendship, and kindness, and generosity...
Douglas: But it’s unexpected. So that’s the part… falling in love all the movies and everything like that but then for a lot of people that certain age thing then they think “OK that chapter is over” so it's unexpected and the fact that you think that you can't ever revive those feelings again.
Keaton: That’s true. When you're younger you go looking for it but when you're older it is more unexpected which makes it even more magical.

FOX411: The singing (you do in the film)… is this the next chapter then for you?
Keaton: Where does that kind of music fit in to anybody's chapter?
Douglas: Have you done an Album?
Keaton: No.
Douglas: You should do an album… with your book, it should go together.
Keaton: I knew he was going to say that! He's my manager. He thinks it's funny.
Douglas: I like this role. I'm going to be your manager.

FOX411: Art imitating life, life imitating art.
Douglas: Exactly, we know she should be at one of the cabarets here in town, one of the up-scale cabarets…