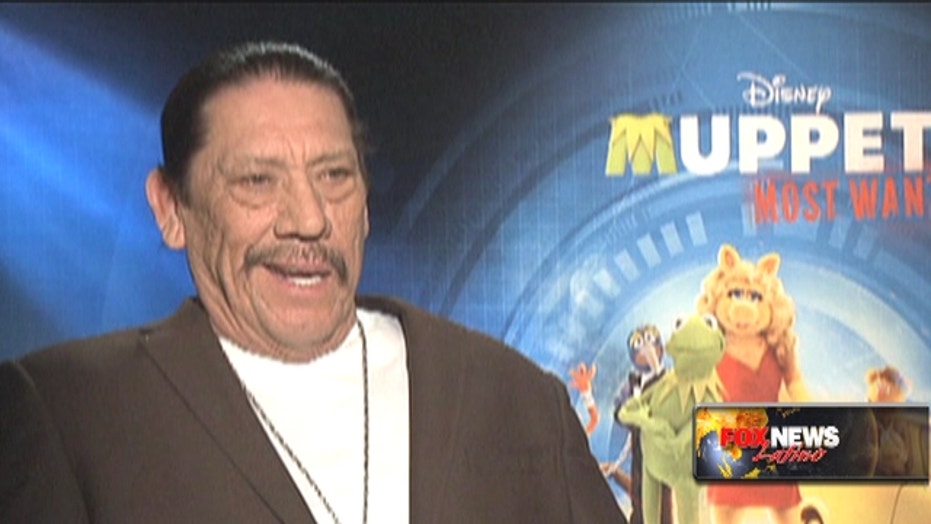 Most people recognize actor Danny Trejo as the badass, blade-wielding vigilante Machete Cortez in Robert Rodriguez's "Machete" and "Machete Kills." But in his latest movie, "Muppets Most Wanted," the 69-year-old actor shows a softer side in a choreographed sequence where he sings and dances.

"You can't prepare for something like this, you show up and trust the director," Trejo told Fox News Latino. "The first time I did it, I tried to sound like Frank Sinatra and [the director] said ‘Dan, just go for it.’"

In the film that hits theaters March 21st, Trejo plays a prisoner in a Russian Gulag who meets a wrongfully imprisoned Kermit the Frog. Kermit puts on a Broadway-like talent show in the Gulag and recruits Trejo's character who, in a scene, jokingly admits to being a triple threat: "a dancer, a singer and a murderer."

Trejo's rugged looks, deep facial lines, extensive tattoos and tough exterior have branded him as the tough-guy villain – in most he plays the bad guy. During his career, which spans over 30 years, he has played everything from a Mexican prison gang member in "Blood In, Blood Out" (1993) to a cold-blooded killer in "Desperado" (1995).

But in the last few years, he's been offered roles against type – such as a caring, straight-arrowed Dean alongside Maggie Gyllenhaal in "Sherrybaby" (2006).

He said us being part of the Muppets franchise was a huge accomplishment.

"When you do something like the Muppets, it’s like, it’s an iconic movie, it’s going to make whatever status you have just bigger," Trejo said.

He said he was initially reluctant to accept the role in "Muppets Most Wanted," mainly because he was cut from another Muppets movie back in 2011. But one of the things that changed his mind was his would-be co-stars.

"Ray Liotta [is] a friend of mine, I got to work with Tina Fey I've always loved her and we got to work together," he said.

In "Muppets Most Wanted," Liotta and Trejo perform a song-and-dance number from “A Chorus Line.” The movie is chock-full of other stars, including Ty Burrell and Ricky Gervais and other celebrities – such as Celine Dion, P Diddy, Salma Hayek and Lady Gaga – have cameos.

"It was a lot of fun," Trejo said, admitting he has a soft spot for kids movies.

"When I did 'Spy Kids,' I would be in an airport in Prague and some little kid would come running up to me and in Praugonian or whatever yelling ‘Uncle Machete!’ Because I was Uncle Machete in 'Spy kids.’"

Trejo is playing another uncle as George Lopez's free-loading 'Tio' in the new sitcom, "Saint George," which made its debut on FX this month and airs Thursday nights. It was the first time the actor delved into the multi-camera sitcom format.

"In comedy, you have to kind of stick with the timing and the words because of the punch line – because if you change a word here, then the punch line doesn't work over here," Trejo said.

Lopez, who also co-created, wrote, and is executive producer of the show, plays a wealthy businessman.