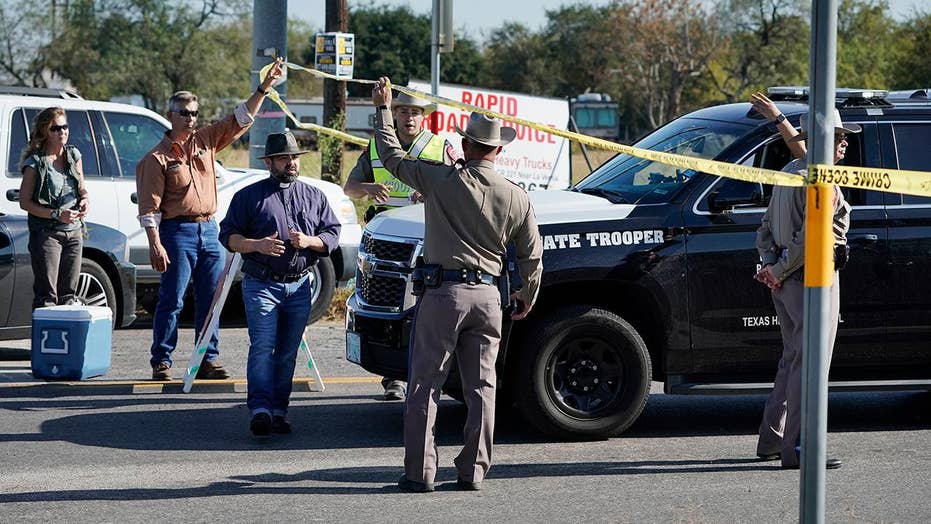 Celebrities have taken to social media to speak out in favor of gun control following a deadly mass shooting at a Texas church.

At least 26 people were killed Sunday when a gunman opened fire at the First Baptist Church in Sutherland Springs, located roughly 30 miles southeast of San Antonio. The shooter, identified as Devin Patrick Kelley, was found dead in his vehicle and believed to have suffered a "self-inflicted" gun shot wound.

Famous faces have since been utilizing their social media accounts to share messages online. While most offer their condolences, others have used the incident to call for more gun control in the United States.

In the wake of the shooting, the National Rifle Association also has been slammed by "Veep" actor Timothy Simons and "Nurse Jackie" actor Lenny Jacobson.

"The @NRA is a terrorist group who control congress with $$$. Nothing will change until that stops," "Nurse Jackie" actor Lenny Jacobson tweeted Sunday.

".@nra you are a terrorist organization. you aid, abet, and protect terrorists," Simons tweeted.

Comedian Chelsea Handler was also among the first to react to the incident, blaming Republicans by saying: “Innocent people go to church on Sunday to honor their God, and while doing so, get shot in killed. What country? America. Why? Republicans.”

Britney Spears offered thoughts and prayers for the community saying, “My heart breaks over the news coming out of Texas. My prayers are with the Sutherland Springs community.”

Apple CEO Tim Cook shared those sentiments saying, “Shocked and sorrowed by the heartbreaking news from Texas. Prayers for all those touched by violence today: victims, survivors, worshippers.”

“Texas... we love you. This is truly awful. Sending my deepest condolences to everyone affected. Something must be done,” Victoria Justice wrote.

Piers Morgan shared the numbers saying, “The population of Sutherland Springs is 643. At least 50 of them just got shot. That's one in 12 of the entire community. #SanAntonio."

Comedian Bob Saget got serious about the incident saying, “My heart hurts for the people of Sutherland Springs, Texas. This has to stop.”

“Just nothing. No words. Numb. Again. May everyone affected in Texas rest in and find peace,” wrote singer Josh Groban.

“No words. My heart is broken for Sutherland Springs, TX and for 2017 America. Please let’s all come together,” wrote comedian Sarah Silverman.

Others focused their thoughts less on the victims and community and more on calling for gun control.

Writer and director Adam McKay wrote, “Mass carnage in Sutherland Springs. We can do better than this. The idea of zero new gun safety laws isn’t just idiotic it’s murderous.”

“Prayers for #SanAntonio and all the families who are suffering the loss of loved ones. I’ll pray also for #GunControl,” said Lady Gaga.

"Where's the next mass shooting gonna be? Any guesses? Should we try to do anything we can to prevent it? No? Ok cool. Good luck out there!" comedian Billy Eichner wrote.

"One shoe bomber tried to blow up a plane and now we take off our shoes," Skolknik wrote. "1520 mass shootings since Sandy Hook and Congress has done NOTHING."

Actress Reese Witherspoon tweeted on Sunday that she was "heartbroken" by the shooting.

Additionally, author Stephen King also tweeted about the attack, asking "how many more have to die before we enact sane gun control laws?"