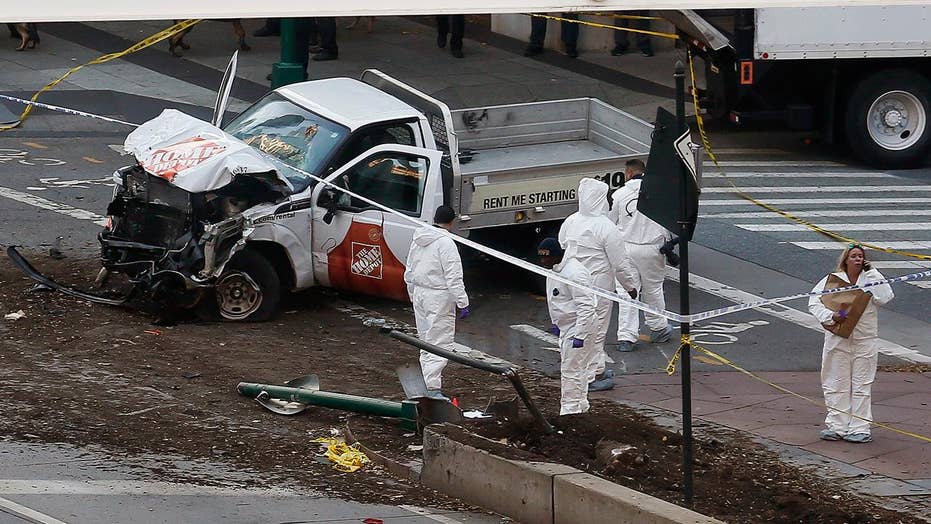 Witness saw several people bleeding on the ground after the truck hit.

Celebrities sent their thoughts and prayers to New Yorkers following Tuesday's fatal truck attack, slamming the deadly crash as "cowardly" and "the worst of mankind."

Police said eight people were killed and 11 more suffered serious but non-life-threatening injuries after a rental truck plowed through a bike lane and hit a crowd in Lower Manhattan. The suspect, who shouted "Allahu Akbar," was shot and subsequently taken into custody, law enforcement officials said. Authorities are investigating the incident as a possible terror attack.

Singer Josh Groban, who posted video from near the scene, tweeted that he is "Devastated for the victims and their families tonight & inspired by the spirit of this city."

"New York City, your indomitable spirit, your courage, bravery and heart will never be diminished or intimidated. We stand with you. #Enough," Lou Diamond Phillips said.

Apple CEO Tim Cook weighed in, saying, "Tonight our hearts are with the victims, their families and all the people of New York. Stay safe and stay strong."

Musician Common said that he was heartbroken after hearing the news, saying, "Always #NYCStrong. I love the people of New York. My heart breaks for the people impacted by today's attack."

"Heartbreaking to learn about the terror attack in New York. Another tragic and senseless act of violence against innocent people #NYCStrong," wrote actor Will Poulter.

Comedian Denis Leary shared a limerick about New Yorkers' strength saying, "New York don't cower or give up the power - city so tall where the apple don't fall - forever. And ever."

Bette Midler shared her condolences with the victims and their families saying, "Terror attack in NYC, not far from 9/11. Deepest condolences to the families of those murdered; and those involved who are scarred forever."

Actress Lea Michele wrote, "My heart is with you NYC."

Producer and actress Roma Downey wrote that she is "heartbroken" for New York. "God please help us we need you," she tweeted.

Actress Patricia Arquette called it "a terrible day" on Twitter, adding that the attack represented "the worst of mankind."

Actress Zoe Saldana sent prayers to the victims of the attack. "My heart is broken," she tweeted.