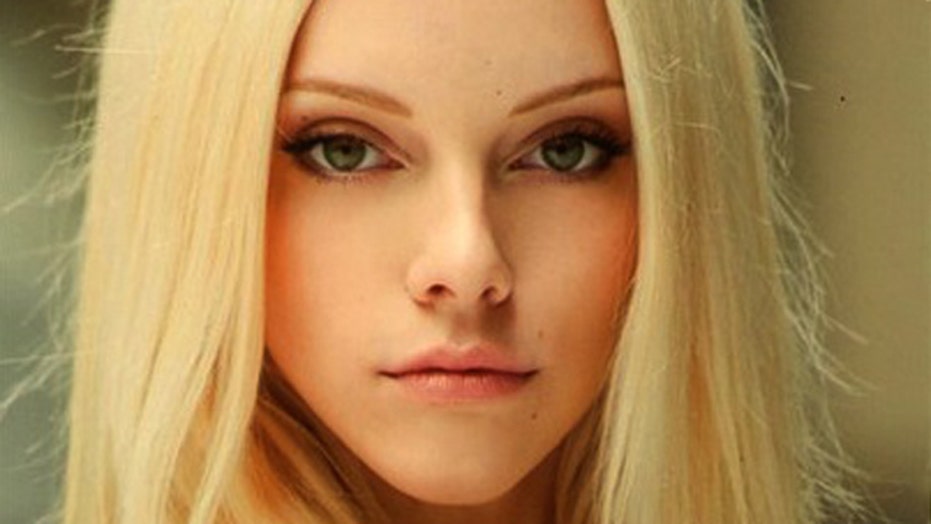 LOS ANGELES – Elle Evans, the bewitching blonde who struts topless in Robin Thicke’s smash hit video, “Blurred Lines” has no problem being naked – all day – in front of strangers.

“It’s is not something that’s really new to me – I mean, I’m comfortable with it –totally,” Evans told FOX411 about wearing little more than a thong on the set of the racy video which has generated over 181 million views since its debut in July.

Thicke, despite his reputation for having a wandering eye, was a total pro on the near-nude set. “He wasn’t really flirtatious,” the Paris, Texas native confessed. “I think he just really wanted to make sure that everyone in the video was comfortable, because we were going to be topless. He was really, actually – surprisingly – gentlemanly."

Even though Thicke’s wife, Paula Patton, wasn’t on the set, Evans doesn’t think she has anything to worry about. “He and his wife are comfortable in their marriage, and they support each other,” she explained. “It doesn’t matter what the media says–it’s his life. He probably doesn’t even care that people are saying what they’re saying about him. Who cares? He’s still going to do what he’s doing, despite the haters.”

Evans had more trouble on the set with another one of her costars, a furry, angry baby lamb. “It actually was really heavy,” laughed Evans. “That lamb weighed about 30 pounds. I was holding it for a few minutes and then I was like, ‘Wait, this lamb is way too heavy!’ So, then Pharell (Williams) tried to hold it. The lamb must not have liked him very much, because he kept kicking and violently thrashing, trying to escape. I guess you really had to hold the lamb a certain way for him to feel secure. At one point, the lamb actually got loose on set for a minute – he was trotting around, making his little bleat noises, you know – ’ba-aaa!’ It was such a cute thing, he really made everyone smile.”

The lamb wasn’t Evans’ first experience working with animals. “Last summer, I worked with Miley Cyrus on her video, ‘Decisions,’” she explained. “That was really fun, because the entire video was like a big, crazy freak show. There were performers and big-boobed ladies. There’s actually a goat in that video. It’s so crazy. In my life, I’ve been in two music videos, and in the first one I was holding a baby goat and in the second one I was holding a baby lamb.”

Evans, who graces the cover of September’s FHM France, believes that Cyrus’s “Decisions” video may have foreshadowed her provocative performance with Thicke at the VMAs in August. “I guess we all should have seen it coming,” she said. “I didn’t, I really didn’t. I thought that she was going to transition from a child actor into a bad-ass rocker chick, but I don’t know what happened. She lost it a little, I think. I was like, ‘Wait! Where’s Miley? Where’s the Miley we love? Where’s the Miley I know and, like, respect? Where did that go?’ I don’t know.”

Even though Evans has no problem performing in her birthday suit, she draws the line at Cyrus’s particular brand of raunch.

“I definitely would say that I didn’t approve,” declared Evans. “It was distasteful, in a way. I was more disappointed than anything. I don’t know. It was a little extreme. It didn’t have to be that extreme. It would have been a great performance, everyone loves the song, everyone was really looking forward to it, and I was appalled. I couldn’t believe what I was watching, honestly.”

Evans thinks that Thicke may have even been unwittingly felt up by Cyrus’s foam finger.

“I think Robin was surprised, too,” speculated Evans. “I heard through word of mouth from people in the industry that Miley’s performance was a lot different in the rehearsal. That it wasn’t exactly what was rehearsed. It was a lot more extreme during the actual performance. I was looking at Robin to see his reaction and I think he was just trying to go with it, I don’t think he expected that.”

Last Friday, Thicke performed “Blurred Lines” live at the Palms Casino Resort in Las Vegas, and recreated the video with three backup dancers, including one who was a doppelgänger for Evans. “I don’t understand why they keep putting the blonde girl in pigtails,” groused Evans. “I wasn’t in pigtails in the video, and I was happy that I wasn’t in pigtails, actually.”

Even though Thicke seems to have a thing for blondes – there are pictures of him getting VERY handsy with fair-haired party girl Lana Scolaro after his infamous VMA performance – Evans thinks his interest may be more broad.

“Who knows?” said Evans. “Maybe he has a thing for women in general.”