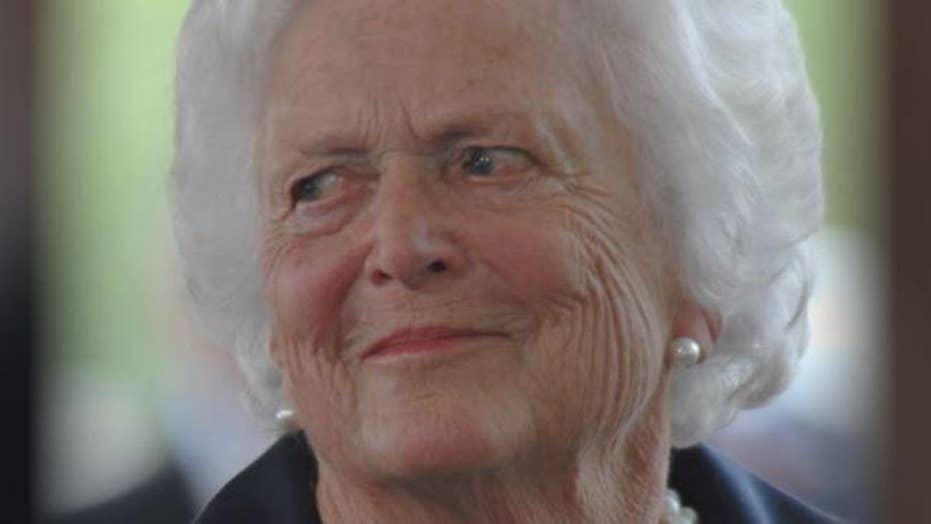 The late Barbara Bush believed her predecessor Nancy Reagan detested her and her family, even when President George H.W. Bush served as Ronald Reagan's vice president.

In the new book "The Matriarch," Barbara told author Susan Page (via People) of Nancy, “She hated us. I don’t know why, but she really hated us.”

The Reagans reportedly left the Bushes out of two White House dinners with Prince Charles and Princess Diana, the book claims, and the Bushes were only invited to official state dinners — which the book speculates was simply because that was protocol.

GEORGE H.W. BUSH AND BARBARA BUSH THROUGH THE YEARS

Page wrote in the book that according to documents obtained from the Reagan library, the Bushes were “slashed out by pen” of invitation lists for dinner with the British royals.

“When deputy White House chief of staff Michael Deaver cautioned Nancy Reagan against excluding the vice president and his wife from the dinner, saying it would be a breach of protocol, she reportedly responded, ‘Just watch me,’“ Page writes.

BARBARA BUSH DIDN'T CONSIDER HERSELF A REPUBLICAN WHEN SHE DIED

“During their eight years of residency at 1600 Pennsylvania Avenue, the Reagans invited the Bushes upstairs to the private family quarters of the White House only a time or two before Bush had been elected to the presidency himself. They never invited the Bushes to accompany them to Camp David,” Page wrote in "The Matriarch."

When Page asked George H.W. Bush why Nancy didn't like him or his wife, he simply replied, “I don’t know.”

Page speculated that Nancy and Barbara “were so alike, and so different. … Somehow, too, each managed to feel superior to, and also threatened by, the other.”

“Nancy was disdainful of Barbara for her sturdy figure, her matronly clothes, and her blunt manner,” Page wrote, while “Barbara was disdainful of Nancy as brittle and shallow, and as a mother who had failed to forge a close or even functional relationship with her children.”

Charles, Prince of Wales, and his wife Lady Diana, Princess of Wales, are welcomed at the White House by American President Ronale Reagan and his wife Nancy in November 1985. (Getty)

Page claims that Nancy was jealous of Barbara's self-confidence, "close-knit family" and Mayflower ties, while Barbara "admired Nancy’s slender figure, the grace with which she wore stylish fashions, and the open devotion she commanded from an adoring husband.”

When Nancy passed away in 2016, Barbara said in a statement, “Nancy Reagan was totally devoted to President Reagan, and we take comfort that they will be reunited once more.” However, in her diary ahead of George H.W. Bush's inauguration, Page claims that Barbara wrote, “I will not treat her [incoming Second Lady Marilyn Quayle] as Nancy Reagan has treated me.”

Barbara passed away in April 2018.