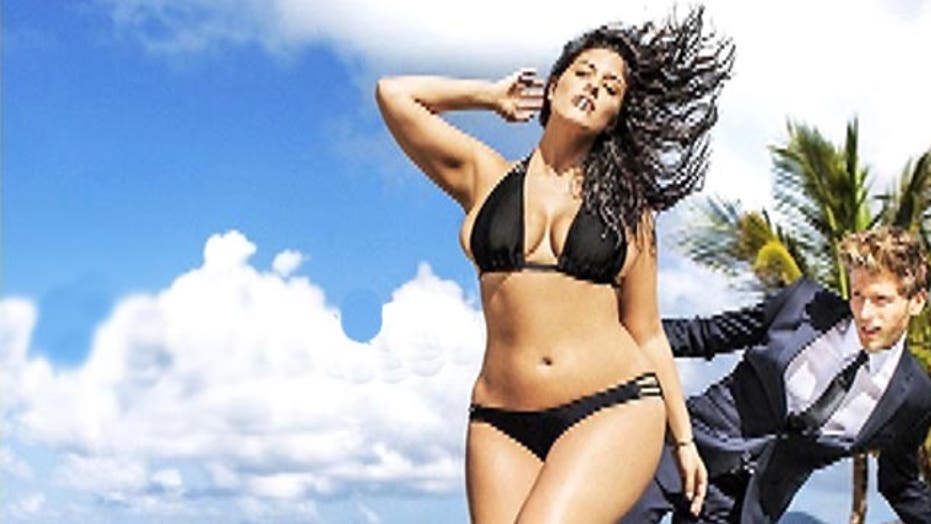 Ashley Graham is getting personal with her latest photoshoot -- not only did the size 14-16 model strip down, but she enlisted some help from her husband, Justin Ervin.

The 28-year-old model is Maxim's latest cover girl and, in one particularly risqué pic, she poses naked while Ervin holds her bare breasts. And Graham tells ET the shot was his idea!

"Yes, those are my husband's hands supporting me," Graham says. "He supports me in more ways than one. What's really funny is it was my husband's idea to do that photo. We call it the Janet Jackson."

The two first met at church in New York and married when Graham was 22. Now, Ervin lives in Los Angeles and works as a cinematographer, while the Sports Illustrated swimsuit model still resides in NYC. So, what's the secret to making a long-distance marriage work?

"We have a rule. We don't go longer than two weeks without seeing each other," she tells us. "It's absolutely fabulous. I love it. We just meet in L.A. or New York. We meet in Paris, Miami. It's pretty sexy."

Clearly the couple is embracing their sexiness now, but Graham has been open about the fact that she decided to wait until marriage to have sex with Ervin, because she says she was "losing [her] power" in past relationships.

"There was already this sexual tension, this roaringness," she now says of the confidence her husband gives her in the bedroom. "We had already established such a friendship that we had the two combine. Which, in my mind, just made magic, because now not only am I sleeping with someone that I trust and I love, but I know that he wants me. He affirms me all the time and lets me know how sexy and beautiful I am."

"We are going to totally have kids. We are probably going to do it in the next few years," Graham also reveals. "Just another part of my brand building."

The Maxim shoot features Graham in various stages of undress or donning sexy lingerie, and the brunette beauty admits she's actually OK being Photoshopped -- to an extent.

"I see a lot of the photos that go onto the screen, the raw images, and we talk about not Photoshopping this and, 'Oh, can you take that zit off of my face away?'" she shares. "I believe in a little bit, but when you're reconstructing my body, when you're reshaping my hips and my thighs and you're taking certain cellulite away -- Hello! I talk about it! I got cellulite. It's like, don't do that, because the customer realizes and the girl who follows me realizes it's just overdone. There is a tasteful way to do it."

Instead, Graham is all about fitness and moderation.

"I am a believer to try it all, eat it all, but I just don't overdo it," she advises. Her biggest vice? "French fries and mac and cheese, in the same meal," she says with a laugh. "I just had curly, spicy French fries yesterday for Easter. Why not?"

Though she is happy to show off her curves -- and her confidence -- in a bikini or her bra or nothing at all, Graham admits that, like everyone else, there is still a part of her body she struggles with the most.

"My lower belly fat. I think so many women have it and I am not afraid to talk about it," she reveals. "But when it is there and it is poking out after burgers and fries, I'm like, 'Ugh.' But you throw on a cute pair of Spanx and keep going."