Rippon, who previously found himself in the news for his impressive skating routines and for his feud with Vice President Mike Pence over gay rights, set the Twitterverse into a frenzy for his hilarious interview answers.

Rippon didn't hold back while speaking to NBC's Andrea Joyce about his emotions after his program.

"I want to throw up, I want to go over to the judges and say 'can I just have a Xanax and a quick drink?'"

He was also asked in another interview by NBC's Andrea Joyce if the Olympics were as he'd expected them to be.

Rippon gave a big sigh and said, "Andrea, it’s like, pretty awesome, I highly recommend it. If you ever have the option, come to the Olympics, it’s like a fun time."

Another relatable moment came when the 28-year-old admitted to eating In-N-Out Burger with fellow Olympian Mirai Nagasu in 2014 after neither athlete made it into the Sochi Olympics.

"We were eating In-N-Out because we were so upset we weren't at the Olympic games," Rippon said.

Four years ago, Adam Rippon and Mirai Nagasu were eating hamburgers on a rooftop after missing the #WinterOlympics.

Adam Rippon wants a Xanax and a drink when he hits the ice and when can we hang out? #Olympics pic.twitter.com/EC9CqgXwTp

I love this Adam Rippon kid

Q: "What are you feeling"

A: I want to throw up, I want to ask the Judges if I can have a Xanax, and I want to drink

#AdamRippon interview like “I just want to ask the judges for a Xanax and a drink” is honestly so relatable 😂 I love his sass. #OLYMPICS

One of two openly gay U.S. athletes at the Pyeongchang Games, Rippon criticized the White House last month for choosing Pence to lead its official delegation for Friday's opening ceremony.

Pence has been considered an opponent of the LGBT community after the conservative vice president signed the Religious Freedom Restoration Act in March 2015 while serving as governor of Indiana. 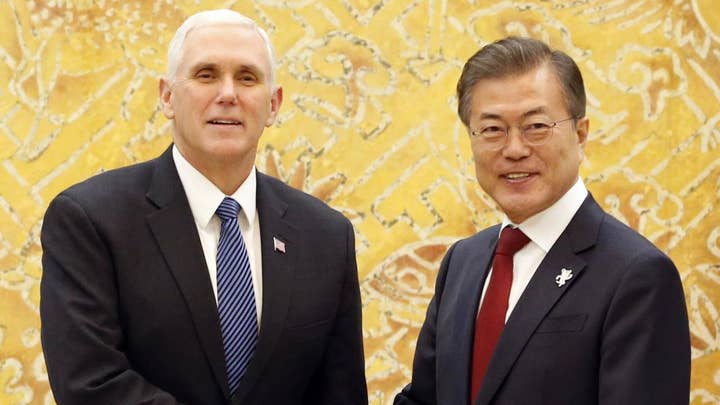 "I don't want to make this too much for my competitors and for my teammates," Rippon said after an afternoon practice session Thursday. "I'm just kind of focused on the competition. The opening ceremony is tomorrow. I don't mind talking about it but I don't want to distract my teammates."

Pence, who arrived in Seoul on Thursday, also tried to bury the story. He tweeted to Rippon: "I want you to know we are FOR YOU. Don't let fake news distract you. I am proud of you and ALL OF OUR GREAT athletes and my only hope for you and all of #TeamUSA is to bring home the gold. Go get 'em!"