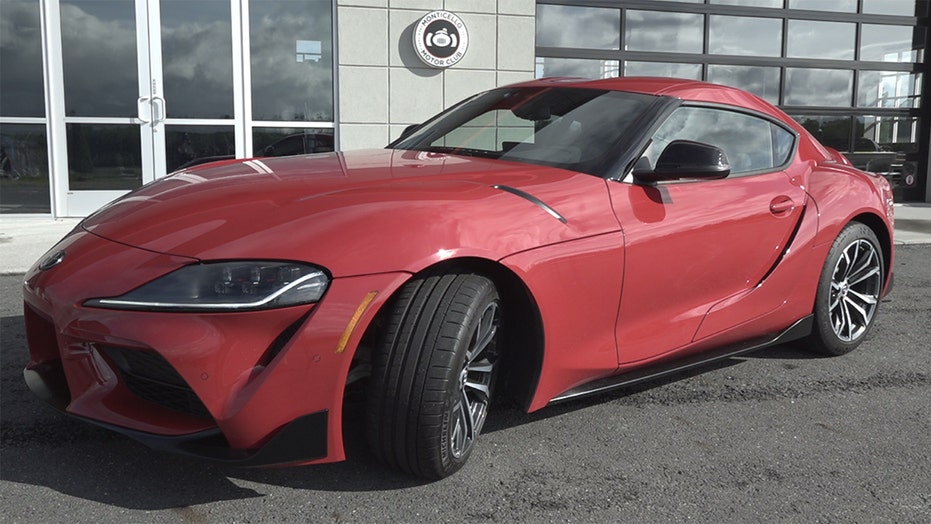 The Toyota Supra is back for the first time in over two decades, but it's a very different car than the one you remember, says Fox News Autos Editor Gary Gastelu.

People often blame bad things on Hollywood and video games, but now there’s something very good that they’re responsible for.

The new Toyota Supra exists in large part because the model has been kept alive for the past two decades on the big screen and in cyberspace.

Toyota stopped selling the last Supra in the U.S. in 1998 and globally in 2002, but its omnipresence in films like the “Fast and Furious” franchise and various racing simulators has been building its legend among younger enthusiasts and keeping the faithful engaged ever since. Resurrecting the name was an easy call when Toyota decided to bring a new high-end sports car to the lineup.

It didn’t do it alone. Toyota teamed up with BMW to develop the two-seat Supra coupe alongside the latest edition of the BMW Z4 convertible so they could share costs while staying out of each other’s lanes. Both cars are built in Austria by contract manufacturer Magna Steyr, which means they are neither German nor Japanese, technically speaking. Welcome to the modern automotive world.

Officially called the GR Supra, it was launched late last year with a 335 hp 3.0-liter turbocharged inline-6-cylinder, which is the traditional  Supra engine configuration, but Toyota added an entry-level model with a 255 hp 2.0-liter turbocharged four-cylinder for 2021. It also increased the power of the six-cylinder from 335 hp to 382 hp and starting prices are now $43,945 for the Supra 2.0 and $51,945 for the Supra 3.0.

Those engines and much of the Supra's mechanicals are primarily BMW material. You’ll even find its logo stamped on many of them. But about two years before the cars went into production the brands went their separate ways to individualize each as much as possible. Toyota also made sure the Supra met its own durability targets, so it could turn out to be the most reliable BMW ever made.

The Supra’s exterior style is like nothing else on the road today. The curvaceous design is busy, but it turns heads. They typically have smiles drawn on them. I could do without the fake scoops, but the whole package quickly grew on me. The double-bubble roof provides plenty of headroom, even for someone tall wearing a helmet, to go along with the epic amount of BMW-spec legroom underfoot. Ten cubic-feet of trunk space reside under its liftback glass.

Both motors are only offered with an 8-speed automatic transmission, so the ninth “Fast and Furious” film, which the Supra is in, probably won’t be featuring any dramatic gear-shifting shots, but there are paddles behind the wheel you can use for some manual control.

The 3.0 is also equipped with a computer controlled-active suspension system, electronically-controlled limited-slip rear differential and power seats that you can’t get in the 2.0. The two models use the same Michelin Pilot Super Sport tires in identical widths, but the 2.0 wears them on 18-inch wheels and the 3.0 on 19s.

On the road, the Supra feels like a premium sports car. Its quiet cabin is filled with a background track of computer generation engine noise that gets turned up in sport mode. Even with the 3.0’s low-profile tires, it provides grand touring levels of comfort. One issue that’s been noted by many is how bad the resonant booming noise is when you open a window. Opening both helps alleviate the issue, but turns the cabin into a wind tunnel. Official fuel economy figures for the 2.0 haven't been finalized, but the 3.0 is rated at 30 mpg highway.

Compared to the Z4, the Supra has a unique instrument panel and seats, but uses the same controls and BMW’s iDrive infotainment system, which has wireless Apple CarPlay smartphone integration, but not Android Auto. Some features, including the adjustment of driver aids like lane-keeping assist, require a distracting deep dive into the on-screen menus, when a driver would be better served by dedicated buttons.

The 3.0 I tried was the 2020 model with 335 hp, which was more than enough for the road, but I also tested a 2.0 there and on the track. Full disclosure: I have never been behind the wheel of any of the older Supras, so I can’t compare the new one to them. I’m pretty sure Toyota didn’t benchmark the new one against a two-decade-old car, anyway.

As it is, the Supra drives exactly as you’d expect it to. It feels and even smells much like a BMW, with neat and tidy handling and no surprises. It’s quick to turn, stable through curves, has plenty of grip and good throttle control.

As far as its value is concerned, it’s hard to say because the Supra exists in something of a bubble. The only two-seat sports car it directly competes against is the Nissan 370Z, which is over a decade old and not nearly as refined, but does offer similar performance for $31,015. Meanwhile, the Z4 2.0i costs seven grand more than the Supra 2.0.

If the price is still too steep for you to live out your Y2K dream, fret not, because the Supra is available to play in Playstation’s Grand Turismo Sport and Forza on Xbox, as it should be.