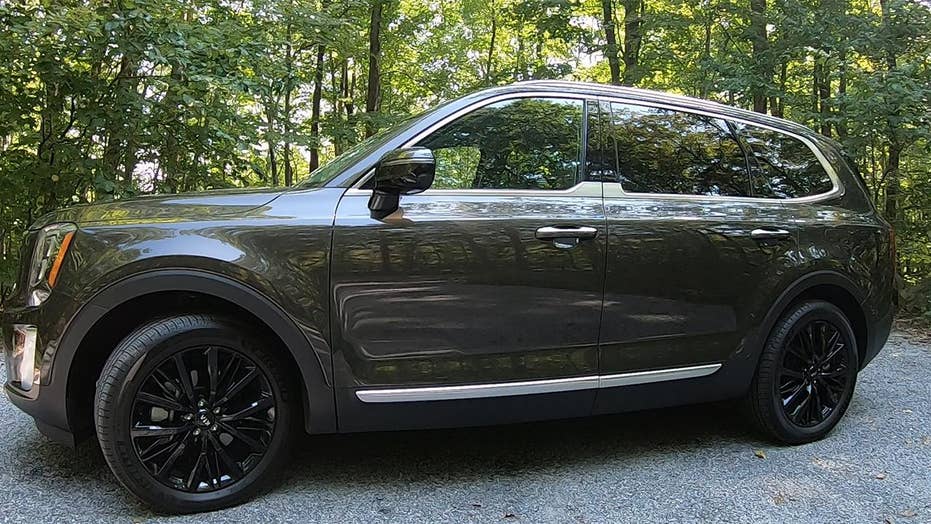 Kia has been selling cars in the U.S. for nearly three decades, and if there’s one thing it learned during that time it’s that Americans like big things. So now it makes a doozy.

The 2020 Telluride is the largest vehicle Kia has ever made. The Georgia-built, three-row SUV matches up against the likes of the Honda Pilot, Nissan Pathfinder and Ford Explorer. It’s a size larger than the Kia Sorrento and offers seating for seven to eight passengers with room for an adult or two in the reclining wayback row and plenty more behind it for cargo.

Pricing starts at $32,785 for a front-wheel-drive Telluride with a 291 hp 3.8-liter V6 and 8-speed automatic transmission, while $2,000 adds an all-wheel-drive system that has settings for a variety of slippery surfaces and is good for 21 mpg combined. That's on the low side for this class, but only by a couple of mpg.

Four trim levels are available and all of them feature the same powertrain, including the top of the line SX I tested that goes for $46,535 when equipped with the Prestige Package. It adds Nappa leather, a suede-like headliner, rain-sensing wipers, climate-controlled second-row seats, 110-volt outlet and a head-up display to the Telluride’s already extensive feature set.

The Telluride’s styling is impressive all around. It has a burly, handsome body that wouldn’t look out of place on a Jeep lot and an interior that punches well above its weight with the quality of its wood, metal and soft-touch trims.

That cabin is an inviting and quiet place to be, aided by the silky operation of the engine and transmission and a ride quality that needs no improvement. It’s great on pavement and, although it doesn’t have the suspension articulation of a true off-roader, you could comfortably drive it down a bumpy gravel road all day.

The Telluride isn’t overpowered, but it’s not lacking, and switching it to Sport mode noticeably livens everything up. It’s not quite as engaging as the Pilot, but it doesn’t get sloppy on a twisty road. I didn’t have the opportunity to test its 5,000-pound tow rating, but it feels strong enough to handle it and there’s a $795 Towing Package that adds a hitch and self-leveling rear suspension if you’d like to give it a shot.

As with most utility vehicles these days, the Telluride is optimized as a family car and has several pieces of tech aimed directly at this, although a WiFi hotspot is oddly not among them. They include a motion sensor that sets off the alarm if you forget anyone in the back seats, an intercom to make it easier to speak to the rear passengers and a system that keeps the rear doors locked if a car is about to pass by.

The list of available electronic driver aids is even more extensive. Along with the expected automatic emergency brakes, adaptive cruise control and 360-degree camera system, the feed from a blind spot camera is displayed between the speedometer and tachometer when you engage the turn signal. The Telluride can also be ordered with a Highway Driving Assistant that self-steers it in the middle of a lane and can automatically match the vehicle’s speed to the posted limit. It’s not technically a hands-off system, and will deactivate after about 45 seconds if you’re not touching the wheel, but you wonder if it really has to because it’s so good.

As is the Telluride, overall. It's more than competitive in its segment, and even makes a strong argument against some luxury SUVs.