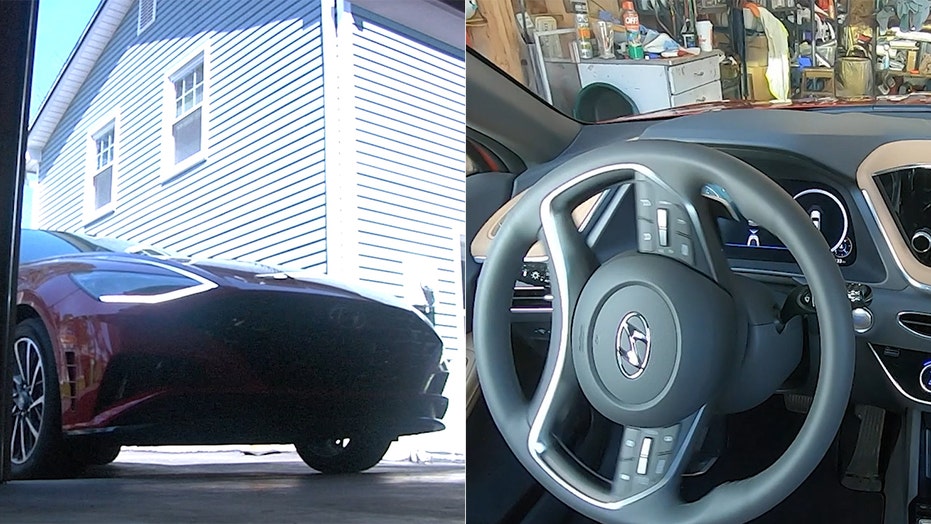 The 2020 Hyundai Sonata can park itself

The all-new Hyundai Sonata features a Remote Smart Park Assist that lets you park it from outside the vehicle. Fox News Autos editor Gary Gastelu tries it out.

The 2020 Hyundai Sonata is a sharp-looking car that’s as sharp as a tack and well suited for today’s world of social distancing, in its own ways.

The all-new midsize sedan comes standard with a multitude of driver-aid tech, and even more of it in the top of the line $34,455 Sonata Limited. This includes pedestrian-detecting automatic emergency brakes, radar cruise control, a robust highway lane-keeping assistant and a 360-degree parking camera system. The last of those isn’t always needed, however, because the Sonata can park itself in some situations…while you’re standing outside of it.

It offers Hyundai’s Remote Smart Park Assist that you may recall from the company’s comical “Smaht Pahk” Super Bowl commercial staring actors Chris Evans, John Krasinski and Rachael Dratch speaking in heavy Bostonian accents. It uses sensors around the car to avoid obstacles as it slowly drives between them while you hold a button on the key fob from up to 16 feet away.

In the Sonata, it’s programmed only for perpendicular parking and is limited by an inability to look for lines painted on the surface, so you can’t use it to accurately park in a space in an empty lot, but you really wouldn’t need to, would you?

What it’s most useful for is pulling out of spots when someone parks too close to the car for you to open the driver’s door, or squeezing it into tight confines, like a cluttered garage. I tried it several times in various scenarios and while it didn’t always line up perfectly straight, it also never ran into anything.

BMW introduced a similar system a few years ago, and Tesla’s Summon feature has even more functionality, but the Sonata represents the furthest trickle down of this type of tech so far.

Smart Park is programmed to stop the car before it collides with something head-on, or if you take your finger off of the button, but has been recalled for a software update after it was discovered that the fail-safe in some early cars might not work if the system has a complete malfunction. Hyundai says the fix for this is in.

The automaker offers a more advanced version that can also parallel park in its hydrogen-powered Nexo utility vehicle, but that is currently on sale only in California where a refueling network exists.

Beyond the semi-autonomous tech, the new Sonata, which starts at $24,575, delivers the blend of dramatic style and spaciousness the model has come to be known for, and offers a compelling alternative to the Toyota Camry, Nissan Altima and Honda Accord, aided by a 10-year powertrain warranty and 5 years of roadside assistance. Lower trim levels come powered by a 2.5-liter four-cylinder rated at 191 hp and 181 lb-ft of torque but the Limited gets an all-new 1.6-liter turbocharged four-cylinder that debuts another advancement.

Along with variable valve timing and valve lift, it can vary the valve opening duration to optimize its power and efficiency over a broader range of operating speeds. The engine is rated at 180 hp and 195 lb-ft of torque and has a fuel economy rating of 36 mpg on the highway and 31 mpg, the latter 1 mph less than the base engine.

Thanks to the turbo, the torque peak arrives at a low 1,500 rpm, compared to 4,500 rpm for the 2.5-liter, which makes the Sonata feel like its powered by a much larger engine when you first hit the accelerator. Ease up on it, and those fuel economy figures are easily achievable in the real world.

The ride quality is no better than average, but it is that. The Sonata is a solid, if unexciting long-distance companion that you won’t mind spending time in, but has one more feature to make you think that you’re not.

The infotainment system has built-in nature sounds, like those CDs that were popular in the late 1980s. Among them are classics like rain and ocean waves, plus oddities like footsteps in snow and a crackling fireplace, which don’t make a lot of sense when you’re on the move. There’s also an open-air café, complete with chit chat, clanking plates and scooters passing buy, which I guess these days is useful for when you’re eating takeout safely in the confines of the car.