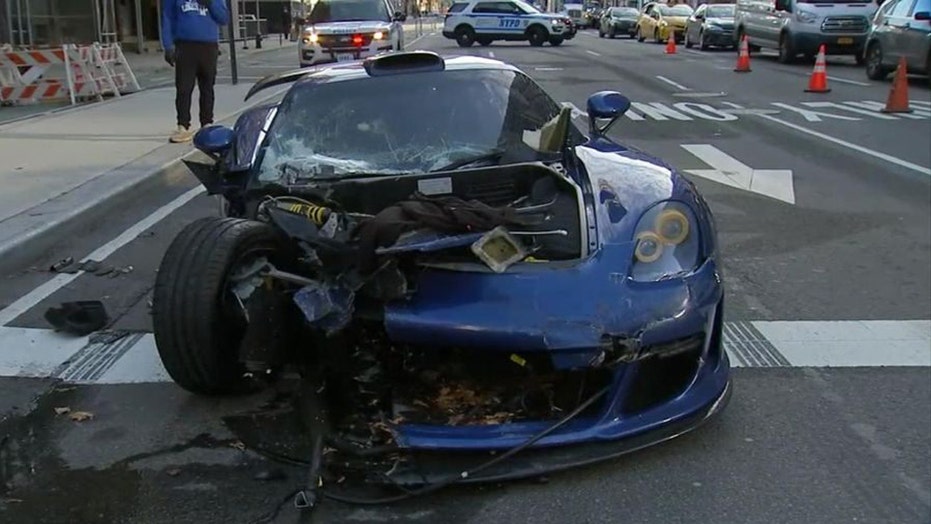 New York City police on Tuesday morning arrested the driver of a rare supercar after he apparently smashed into several vehicles and wrecked the $750,000 car a few blocks from the Javits Center convention hall, where a field hospital housing COVID-19 patients has been set up by FEMA.

The blue Gemballa Mirage GT is a bespoke version of the Porsche Carrera GT that actor Paul Walker was riding in when he was killed in a fiery crash in 2013.

Police have not identified who was driving the car at the time of the accident or say if there were any injuries, but The Drive and Jalopnik report that the vehicle matches one owned by a man named Ben Chen, who founded the Gold Rush Rally, which organizes luxurious cross country driving trips for high-performance car owners. Chen’s Instagram account, which has 378,000  followers, was set to private at the time this story was written.

Video posted to Instagram shows the damaged Gemballa pulling away from the scene of the 7:30 am collision and running at least one red light before it was pulled over by police.

Traffic congestion in New York City has fallen dramatically as the state remains under a stay-at-home policy, which has led to a spike in speeding. The New York Post reports that the number of speed camera tickets issued between March 5 and 24 -- before the state's PAUSE program was in full-swing -- increased over 12 percent amid a 35-50 percent drop in traffic.

UPDATE: Police have confirmed to Fox News Autos that the driver was Benjamin Chen, who was charged with Operating a Motor Vehicle Impaired by Drugs and Reckless Driving. Five cars, including the Gemballa, were damaged in the incident.

Road & Track has posted security camera footage of the moment the Gemballa lost control and crashed into the parked cars: