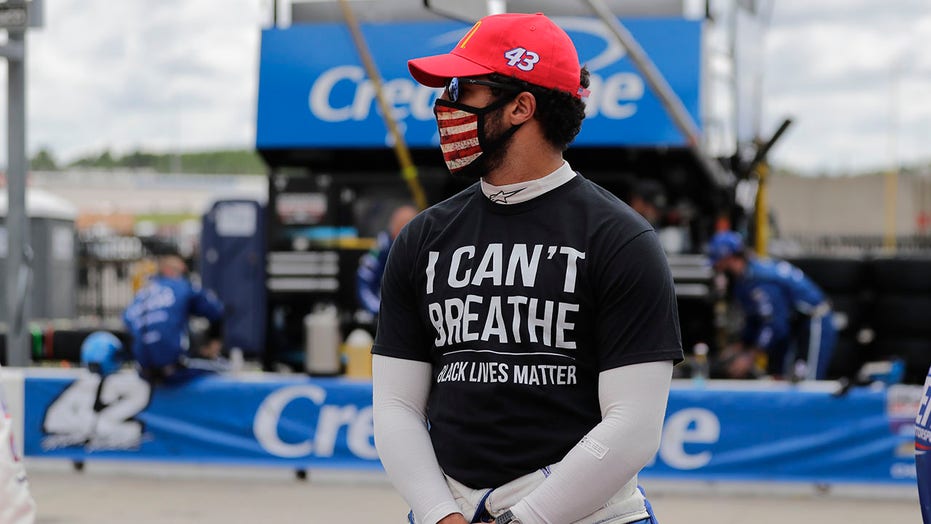 NASCAR pays tribute to the nation's health care workers at the first official professional sporting event since the onset of the coronavirus pandemic.

Bubba Wallace, NASCAR’s only African-American driver at the sport's highest level, has called on the organization to remove the Confederate flags from racetracks going forward.

Wallace wore a shirt that read “I Can’t Breathe/Black Lives Matter” on Sunday before his race in Atlanta. He told CNN on Monday that NASCAR should take aim at the Confederate flags.

“My next step would be to get rid of all Confederate flags,” the No. 43 racer said. “No one should feel uncomfortable when they come to a NASCAR race. So it starts with Confederate flags. Get them out of here. They have no place for them.”

The 26-year-old said he knows that his take is an unpopular one.

“There's going to be a lot of angry people that carry those flags proudly, but it's time for change,” he told CNN. “We have to change that, and I encourage NASCAR — we will have those conversations to remove those flags.”

Wallace’s comments came after NASCAR President Steve Phelps delivered a message to drivers before the start of the Atlanta race.

“Thank you for your time,” Phelps said. “Our country is in pain and people are justifiably angry, demanding to be heard. The black community and all people of color have suffered in our country, and it has taken far too long for us to hear their demands for change. Our sport must do better. Our country must do better.”

A black NASCAR official also took a knee in solidarity with Colin Kaepernick.

“The time is now to listen, to understand and to stand against racism and racial injustice,” Phelps said. "We ask our drivers ... and all our fans to join us in this mission, to take a moment of reflection, to acknowledge that we must do better as a sport, and join us as we now pause and take a moment to listen.”