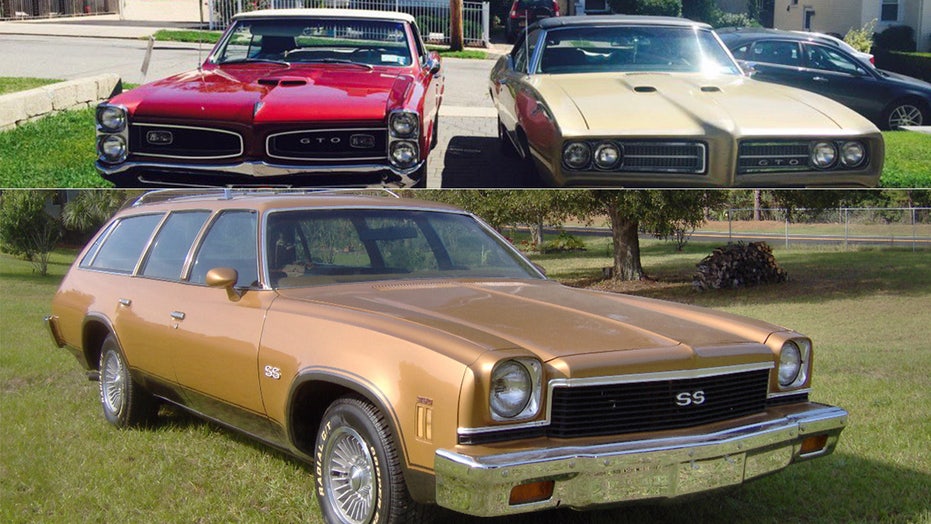 While we're all stuck at home Fox News is holding a series of virtual car shows where you can share and discuss your cool cars and trucks with the rest of the Fox News Autos audience.

We had a great turnout for the first Fox News Autos Virtual Car Show and received plenty of entries for the American Muscle event. A few of our favorites are below, but don’t worry if yours didn’t make it, because we’ll be having many more shows, some with model-specific themes, starting with Pickups.

So check out the photos from your fellow Fox News Autos fans, chat about the cars in the comments and enter the next Fox News Autos Virtual Car Show by responding with a photo and short description of your truck to the Twitter post above.

Dan from Indiana says when his late father took him to buy this Camaro in 1976 it was a wreck, but the two of them rebuilt it to original factory specifications with a 327 V8. Today it has 118,000 miles on it and is still part of the family.

Like father, like son. Thomas and Anthony F. from New York City share a passion for Pontiac GTOs. Son Tom’s is an all-original 1969 model, right, and dad’s is a 1966 with a modified four-barrel 389 V8 and 2-speed transmission. And the red beauty is far from his first. Tom says his father owned three others, and one of them was stolen … twice!

The Dodge Challenger is one of the best-selling sports cars in recent years, but Erin C. from Tampa found an original way to make hers stand out from the rest with a unique two-tone paint job. Her husband, Eric, who served in the Coast Guard at Key West, says she drives it every day.

Russell James had just finished reading a magazine article about Chevy’s rare muscle wagon in 1985 when he saw one pass by. Smitten, he returned to the scene the following day hoping to find it and it was parked nearby. It wasn’t in great shape and the owner was happy to sell it. He’s since restored it with the original 350 V8 engine and hasn’t thought about letting it go since.

Michael Kraft bought his Challenger over 40 years ago when he was 16, but it spent 22 years in the garage while he served in the U.S. Navy. His wife says he always wanted to restore it, and a few years back she told him to go for it, no matter what it cost. The project took several years, but now he’s 58 and cruising the streets of Jacksonville, Fla., in his award-winning dream machine.

Blayze from Chester County, Pa., has been putting his car’s performance to good use. The high school senior says he bought the Challenger with money he earned working as a lifeguard and now uses it as a first responder vehicle for his work as a volunteer firefighter and fire police officer.

Tony Priano’s Chevelle is a classic custom muscle car. He built the 450-hp 350 cubic-inch small block with a friend, installed a 410 posi rear end and said the street-legal coupe runs mid-12-second quarter-mile passes on the drag strips of Southern California.

Andrew Cafcalas from Houston thanks his parents for giving him the opportunity to buy his Camaro, which he works on with his son and which his daughter named Speedy. Its stock interior belies heavily customized and modified mechanicals that include a 383 V8 with RHS heads and a Fi Tech throttle body, Hotchkiss suspension and disc brakes.

Rentals are typically the least-desireable cars imagineable, but there's one that's a solid gold classic. Robert Weikel's 1966 Mustang Shelby GT 350-H was a special edition of the high performance pony built for Hertz that became known as the "rent-a-racer" because people often took them to the track in violation of the rental agreement. Weikel bought his particularly rare white and gold example 46 years ago and restored it as a retirement project, complete with a signature from fellow Texan Carroll Shelby himself.

The Iowa license plate on Brad Craig's Impala SS says it all: SSLEPN. The full-size sedan was a sleeper performance car that borrowed its 260-hp 5.7-liter V8 from the contemporary Corvette and could surprise plenty of sports cars at the drag strip. That's especially true for Craig's, which is packing even more power thanks to a supercharged 383 stroker V8 with a SuperRam intake that's good for a tire-torturing 600 hp at the rear wheels.