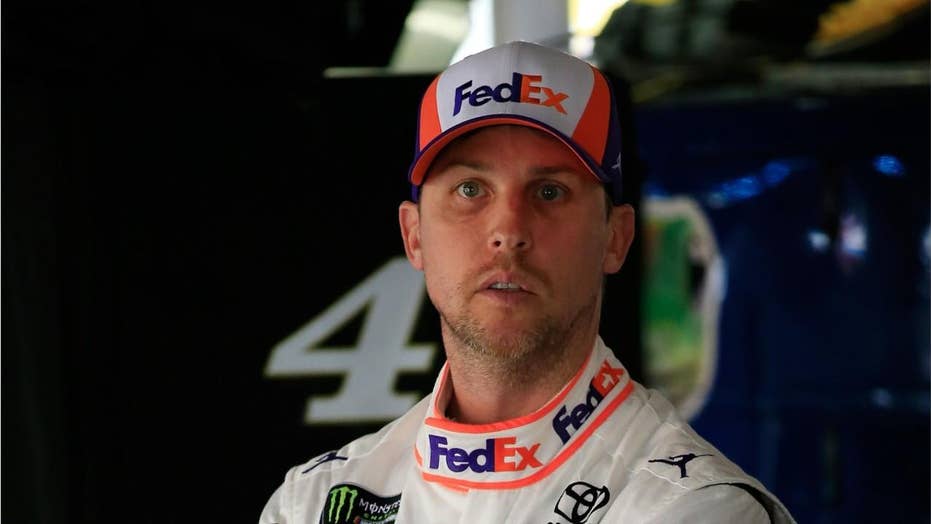 Denny Hamlin had enough speed In his Toyota, enough confidence in his crew chief, and just enough fuel to reach the finish line. Hamlin got the win Sunday at Pocono Raceway — his fifth at the tri-oval track nestled in the mountains — but so much more could be on the horizon.

At 38, Hamlin is having one of the best seasons of his career for Joe Gibbs Racing. He has a Daytona 500 victory, and two other wins and just maybe, his best shot at a NASCAR Cup Series championship since he fell short in 2014.

"I feel as long as we keep putting the effort in what we're doing, I have as good a shot as any," Hamlin said.

The Cup championship has eluded Hamlin but not much else has over a fantastic career that took off as a rookie in 2006 when he swept two Pocono races. He won two straight races at Pocono over the 2009 and 2010 seasons, but often struggled in recent years to seriously compete for a win on the tri-oval track.

He needed a bit of everything to go right over the final laps Sunday to reverse his fortune and win for the first time since March in Texas. Hamlin had to clear JGR teammates Erik Jones and Martin Truex Jr., then had to conserve fuel in the No. 11 for when he needed it on two late restarts, including the final one in overtime.

Hamlin is coming off his first full winless season of his career and split with crew chief Michael Wheeler, with JGR giving the reigns to Chris Gabehart. Hamlin said he has full faith in the first-year Cup crew chief and followed his directives on fuel. Gabehart made all the right calls atop the pit box.

"I just let him go, get the lead," Gabehart said. "Then as soon as he got out front, I pulled the reins on him, started putting some in the bank."

That was enough for Hamlin.

"Win or lose, he comes up with the plays, and I'm the one that needs to execute it," Hamlin said. "When he said, 'OK, I need two positions on this restart,' I got to go get two positions. He's really done a good job of knowing what it takes to win in the Cup Series in his rookie season. I mean, he's going to be around for a very long time."

Hamlin's three wins are the most since he won five in 2012 and his 10 top-10 finishes match his total from last season. His 34th career win in Cup helped lead a 1-2-3 charge for JGR: Jones, who needed a win to secure a spot in the playoffs, was second and Truex third. Hamlin also erased some of the sting from his near-miss last week at New Hampshire when Kevin Harvick caught him late for the win.

With the leaders running low on fuel, Hamlin had enough left to get a good jump off two late restarts that made the difference. Hamlin seemingly had the race won in regulation when he took the lead off a restart with four laps to go after Kurt Busch slammed into the wall to bring out another caution. Hamlin, Jones and Truex made it a 1-2-3 running order for JGR as the race headed into OT. That's the way it shook out after three extra laps, and on Sunday, Hamlin had the right combination to score his third straight top-five finish.

"We're running our best right now," Hamlin said. "There's no doubt about it."

Here's what else happened at Pocono.

JOHNSON FOR THE WIN

Seven-time champion Jimmie Johnson still hasn't won a race since June 4, 2017, at Dover, but he did win the second stage of the Pocono race. Johnson won a stage from the first time this season and only the second in the three seasons since NASCAR implemented the manufactured breaks. He finished 15th.

Pocono held its final July race for the foreseeable future. The track has held two NASCAR Cup weekends since 1982, but will move to one race weekend next season. NASCAR will run two Cup races at Pocono on the same weekend, one Saturday and one Sunday, both expected to run around 350 miles.

Pocono fans raised their glasses on the 11th lap to toast the memory of Nick Harrison, a popular crew chief who died last weekend in his sleep after the Xfinity Series race. He was the crew chief of the No. 11 car.

The series shifts to Watkins Glen were Chase Elliott scored his first career Cup win last season. Elliott's race at Pocono ended early because of a blown right tire that sent the No. 9 Chevrolet into the wall.