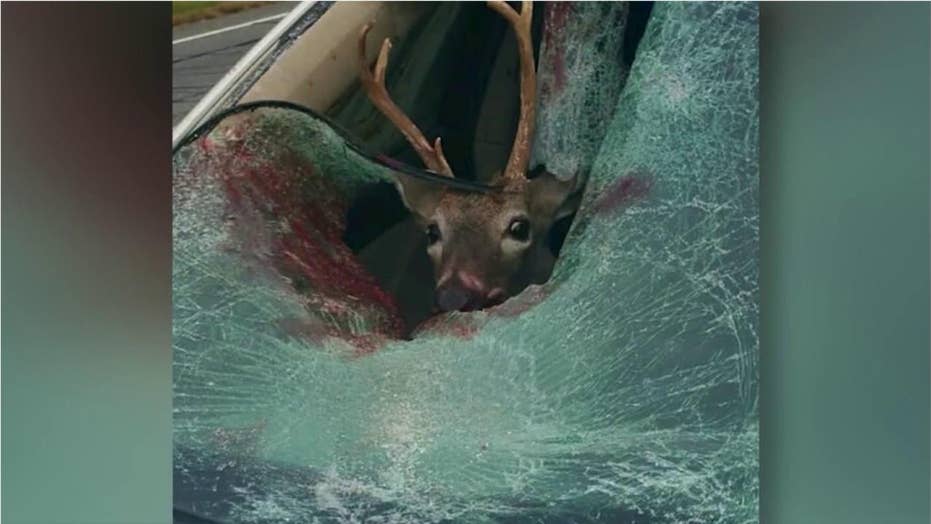 Shocking images of a deer who crashed through the windshield of a moving car, only to land in the passenger seat.

A deer came flying through the air and landed inside a car. When the driver looked over, she saw a bloody eight-point buck sitting in her passenger seat.

Heather Hayes was heading to work on Highway 53 in Floyd County, Ga., Tuesday morning when she saw a big brown blur in midair, then it crashed through her windshield.

"I close my eyes, I feel glass shatter across my face, there's wind. I open my eyes and I look in the passenger seat and there's the deer," said Hayes.

Trying not to panic, she said she eased off the gas and pulled over to the side of the road. But the deer was in a panic. He was trying to escape.

"He was thrashing about, trying to get out," said Hayes.

She jumped out of the car and flagged down someone for help. Floyd County police officers showed up and were just as shocked as she was.

"The police officer came and [the officer] said in his 13 years of experience he had never witnessed this," said Hayes.

Animal Control had to tranquilize the deer in order to get it out of the car. Once they realized the animal had a broken back and two broken legs, they had to put it down.

Hayes says she felt bad for the animal but is filled with gratitude that she wasn't injured.

"I'm thankful I walked away, because a few inches, it could have been critical, a fatal situation," said Hayes.