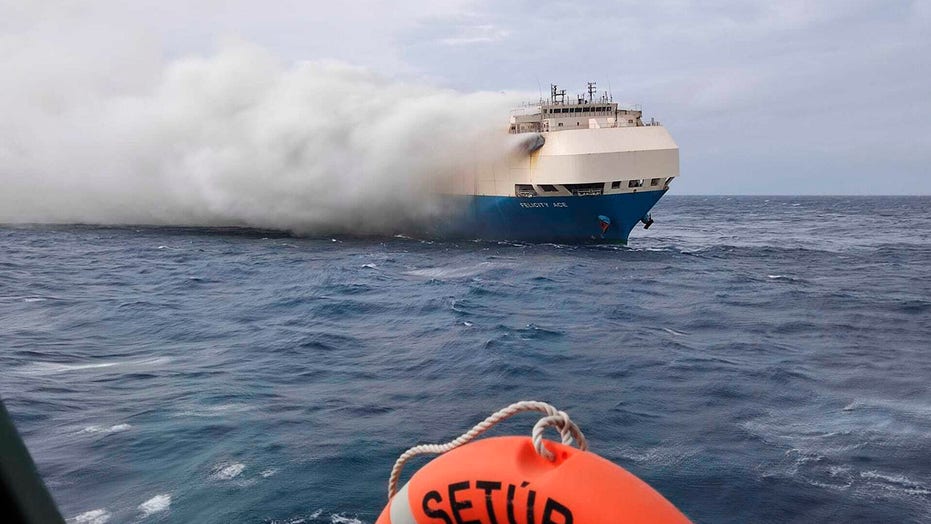 A cargo ship that was disabled when it caught fire near the Azores almost two weeks ago has sunk in the Atlantic Ocean.

The Felicity Ace was being towed to land when it began to list to starboard in heavy seas about 250 miles off the Portuguese island chain and took on water in heavy seas, according to the ship's manager.

The Portuguese navy confirmed that it sank in a location outside of Portugal's territorial waters that is over two miles deep.

The Portuguese navy rescued all 22 crew members onboard the Felicity Ace after it caught fire on Feb. 16. (https://www.foxnews.com/media/allen-west-texas-dems-vacationing-portugal)

Approximately 4,000 primarily from Volkswagen Group brands, including Porsche and Lamborghini, were onboard and being shipped from Germany to the U.S. when the ship caught fire for still unconfirmed reasons, although some have suspected it may have been caused by a battery in one of the electric vehicles in the shipment.

Several customers had posted to social media that they had been informed their cars were onboard the ship and that their orders would need to be rescheduled for production.

The cause of the blaze was not determined, but some have suspected it was started in the battery of one of the electric cars onboard. (Portuguese Naval Forces / Handout/Anadolu Agency via Getty Images)

The Portuguese navy said it was monitoring the situation for any signs of a major oil spill, but had only seen a small amount of wreckage and a patch of oil so far.

Volkswagen has confirmed that insurance covered the loss, which experts told The Wall Street Journal could be as much as $155 million to the automaker, while the loss of all the cargo onboard was valued at $438 million.