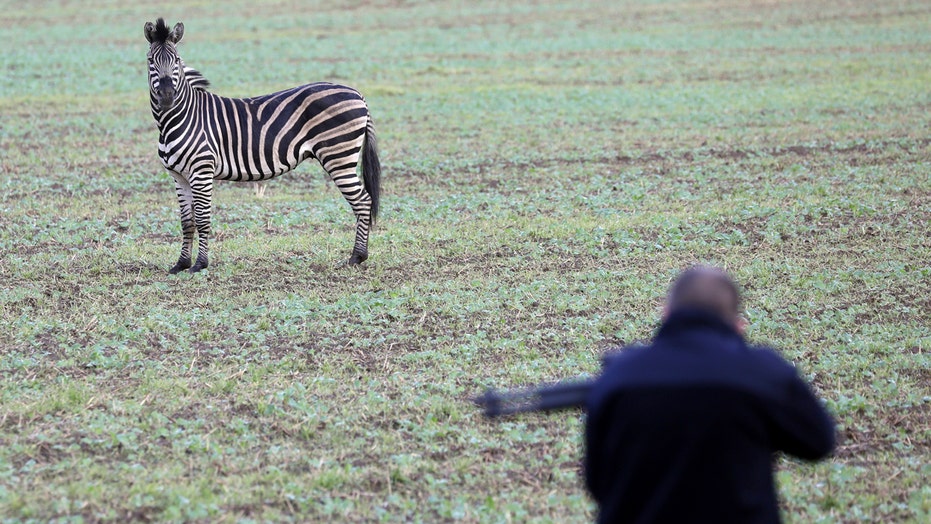 A runaway zebra was shot dead on a highway after bolting from a circus in Germany and causing a traffic accident in addition to "property damage," according to officials.

The Rostock Police said in a news release the two zebras escaped early Wednesday from a circus near Tessin, located in the northeastern part of the country.

One of the zebras was captured around 4:45 a.m., but the other – named Pumba – disappeared for several hours.

Around 8 a.m., Pumba was spotted on the A20 highway near Tessin, where it had caused a traffic accident involving two vehicles.

"The animal was going in the wrong direction on the autobahn from Tessin to Rostock," a police spokesperson told German news outlet Deutsche Welle.

TWO DEER RESCUED AFTER THEY GET STUCK IN ITALIAN CLOTHING SHOP, SWIMMING POOL IN GERMANY

No one was injured in the accident, including the zebra, but the highway was temporarily closed as authorities investigated the accident and attempted to subdue the animal.

A zebra that ran away from a circus stands in front of a police car on the A20 motorway near Ticino, Germany on Wednesday. (Tilo Wallrodt/picture alliance via Getty Images)

Officials said they tried to bring the animal under control but were "unsuccessful" — Pumba was able to escape from the A20 by running over a car's engine hood.

A patrol officer vehicle was damaged during the incident, and a police officer sustained minor injuries when trying to catch the animal.

MOOSE GETS STUCK IN NEW HAMPSHIRE POOL, FORCING RESCUERS TO GET CREATIVE

Shortly after, the Zebra was spotted again in a field between Kowalz and Thelkow.

A runaway zikus zebra stands on a field while a man with a stun gun tries to approach the animal in Thelkow, eastern Germany, Wednesday, Oct.2, 2019. (Bernd Wuestneck/dpa via AP)

"The circus tamer responsible for the animal then also tried in vain to bring the zebra under control," police said in a statement.

Emergency rescue workers from a fire brigade also joined in the efforts to try to catch the zebra before it was fatally shot.

The animal died on the spot, police said.

It's not known how the animals escaped from the circus, but authorities said the exact circumstances of the incident "are still being clarified." A Rostock city spokesperson claimed the use of a tranquilizer dart was not an option since the animal was "uncontainable" and posed a threat.

The killing has sparked outrage in Germany, with some saying there was no danger present, according to The Guardian.

"There was no danger,” resident Petra Melchin told Die Welt. “He was exhausted, his head was down.”