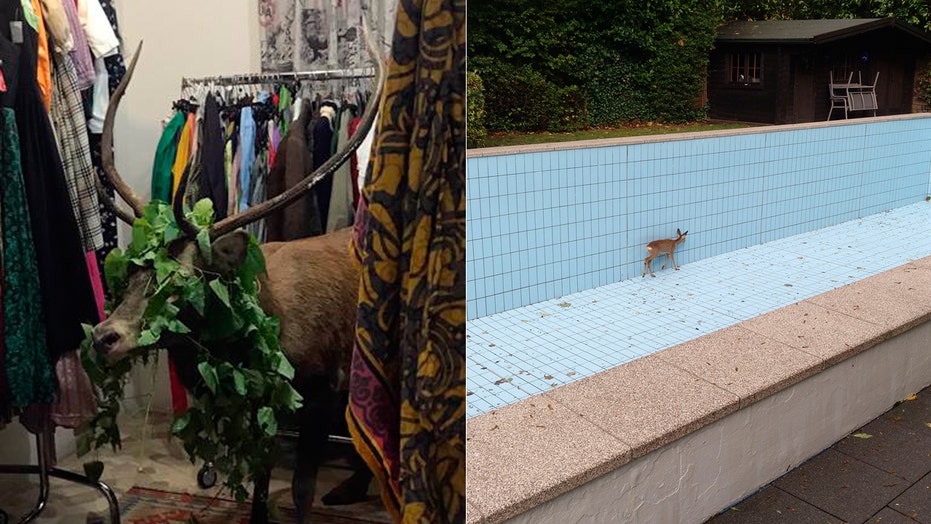 In just two days, deer in two different parts of Europe ended up needing a little bit of help from humans.

The first incident happened on Monday, when firefighters were called to free a deer that got stuck in an empty swimming pool.

Fire officials in Wetter an der Ruhr, located in western Germany, said they were alerted to the small animal that was trying to get out of a swimming pool.

A photo released by fire officials showed the deer unable to escape the steep sides of the empty pool.

In this Monday Sept. 30, 2019 photo a deer stuck in an empty swimming pool in the village Esborn near the town Wetter an der Ruhr, Germany. (Feuerwehr Wetter (Ruhr) via AP)

A hunter was called in to help by local authorities, who were able to grab the animal by its hind legs and push it out. Officials said in a statement Tuesday the deer "didn't even thank anyone for its rescue" before scurrying away.

One day later, another deer wound up in its own set of mischief in Italy.

UP TO 20 KANGAROOS DEAD IN AUSTRALIA AFTER DRIVER APPARENTLY MOWS THEM DOWN, POLICE SAY

Authorities in the mountain resort town of Cortina d'Ampezzo, located in the Italian Dolomites, said a confused deer believed to be about to be 4 to 5 years old bolted into a clothing store and got trapped inside.

The deer slipped into the shop that specialized in tirolese outfits while the assistant was away, and got trapped.

A photo released by officials showed the deer standing amid the clothing cracks while a garland of leaves was wrapped around its head.

A deer stands by clothes after crashing into a shop in Cortina D'Ampezzo, Italy, Tuesday, Oct. 1, 2019. (Ufficio Stampa Provincia di Belluno via AP)

Officials had to cordon off Cortina's shopping square to allow local veterinarians to catch the animal, anesthetize it and bring it back to the wild.

The street was blocked off for several hours before the animal was free, according to the Associated Press.

"Luckily, all ended well," Cortina mayor Gianpaolo Ghedina said. "Once the animal was sedated, it was brought back to the woods and then freed."